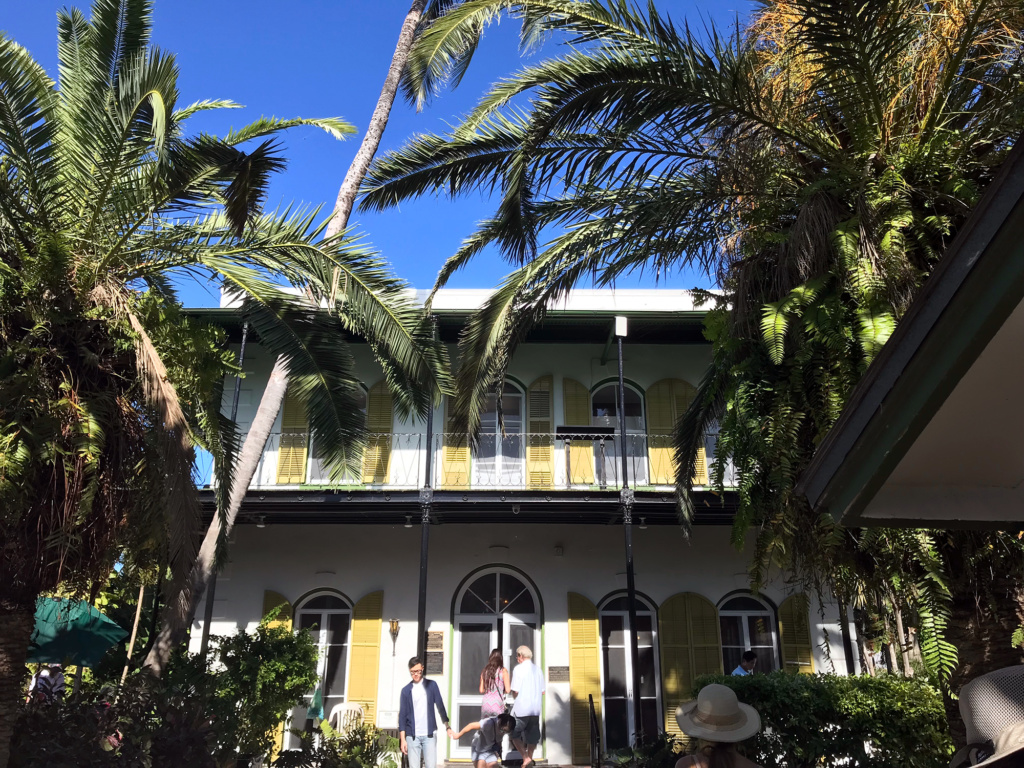 Highway 1 took us from Fort Lauderdale to the southernmost point in the United States. We had a blast in Key West before boating through gator land in the Florida Everglades.

After the rocket launch madness, we were stoked to head toward a BLM-style camping spot like those in the west, which are hard to come by in Florida. Over here, there are Water Management Areas where camping is permitted in designated areas by making a free reservation. That being said, they can get booked up quick – especially with February being the peak of high season in Florida. We arrived at DuPuis WMA after nightfall expecting a quiet forested area but soon realized it was basically an RV Park without hookups. I’m sure it’s not always like that but it was comical how jampacked it was. Granted it was a Friday and this place boasts amenities like bathrooms, hot showers and garbage disposal (a euphemism for dumpsters), which are all rare to find on free public land. This particular area is considered an equestrian campground but accommodates non-equestrian campers with RVs as well. As someone from the city, it was pretty cool to wake up to horses walking by the van despite them having to trot through a maze of RVs. When navigating which WMA you can camp at based on your camping equipment, the lady I spoke with on the phone clarified that a small camper like ours can fit at any of the sites, except backcountry. Larger RVs are generally best suited for the equestrian grounds and tents are good to go anywhere. Depending on the time of year, I’d suggest preemptively making some reservations along the way and cancelling them ahead of time (be nice) if need be – easier than scrambling last minute and toying with the idea of pitching a tent in a Walmart parking lot (don’t do this). 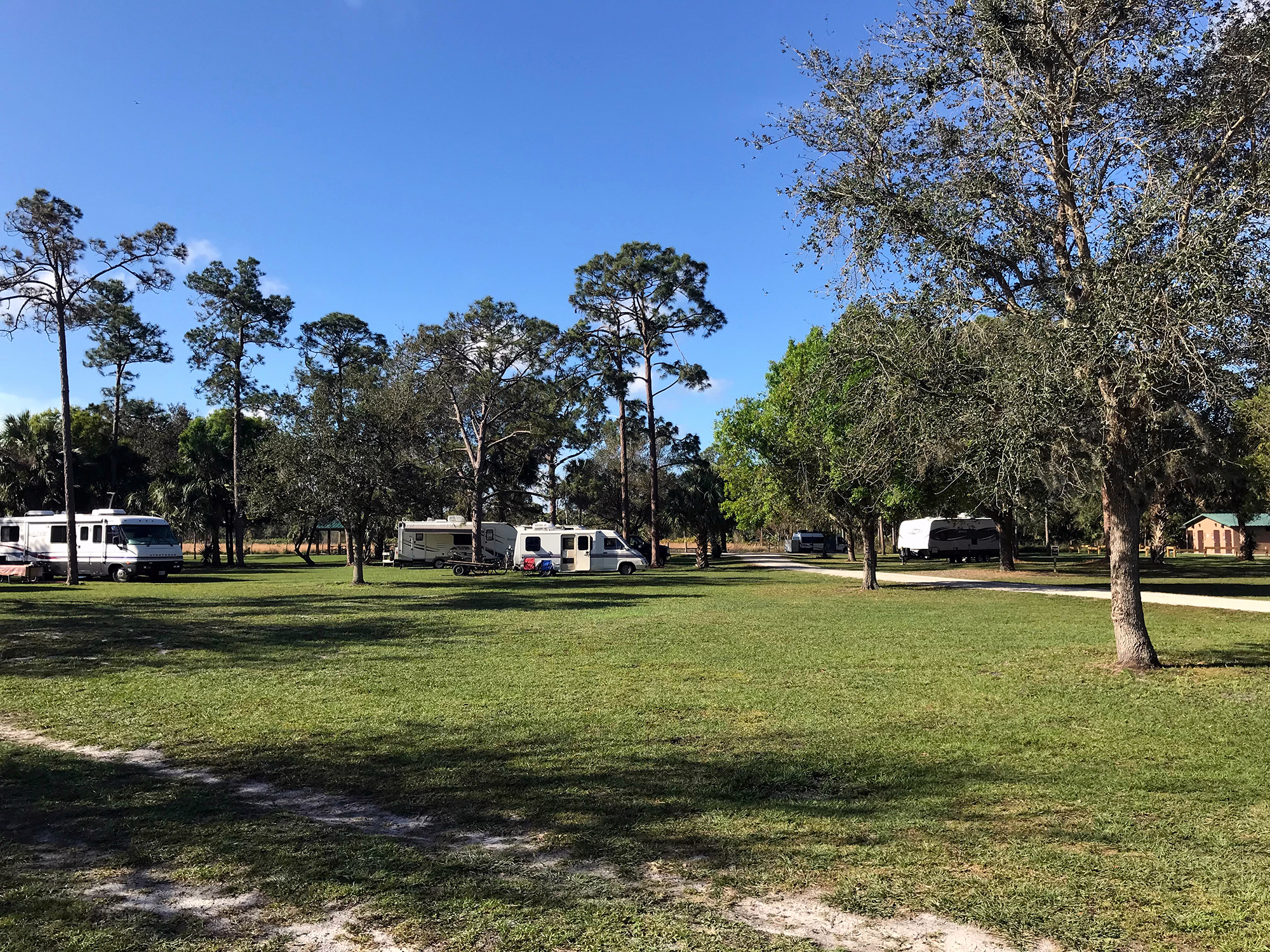 This is the DuPuis WMA after some people had cleared out in the morning. Still lots of folks but plenty of green space to go around

Fort Lauderdale awaited us with friends, an air conditioned apartment and even colder beer. We spent the weekend catching up with an old friend of Justin’s and enjoying the luxury of having a flushing toilet at our disposal. With our streak of abnormally low temperatures hitting every town on our path, Fort Lauderdale shook things up and hit some seasonal highs. After months of acquiring extra blankets and making sure our propane is topped up to run the furnace, we had to go out and buy a fan. Boohoo, I know, but keep in mind we have a Canadian van aka great furnace but no a/c. Needless to say, we received no sympathy from people back home as they scrape ice off their cars and moustaches. Anyway, we set up for the work week at a county park called Easterlin Park in the Oakland Park neighbourhood (how many times can I say park in one sentence?). This was a really cool spot that even our Florida native friends didn’t know existed. It’s a lovely green space in the middle of an urban area that felt secluded and lush – well, until the blaring train went by. It’s part of a group of 5 parks scattered across Broward County that all offer different types of camping (and wifi!) with nice facilities. We just so happened to be there when the Parkland shooting happened and received alerts on our phones when the shooter was still at large. We were about 25 minutes away, so that was a little scary. Not gonna get into it, but here’s to sincerely hoping that no such emergency alert has to be issued again. 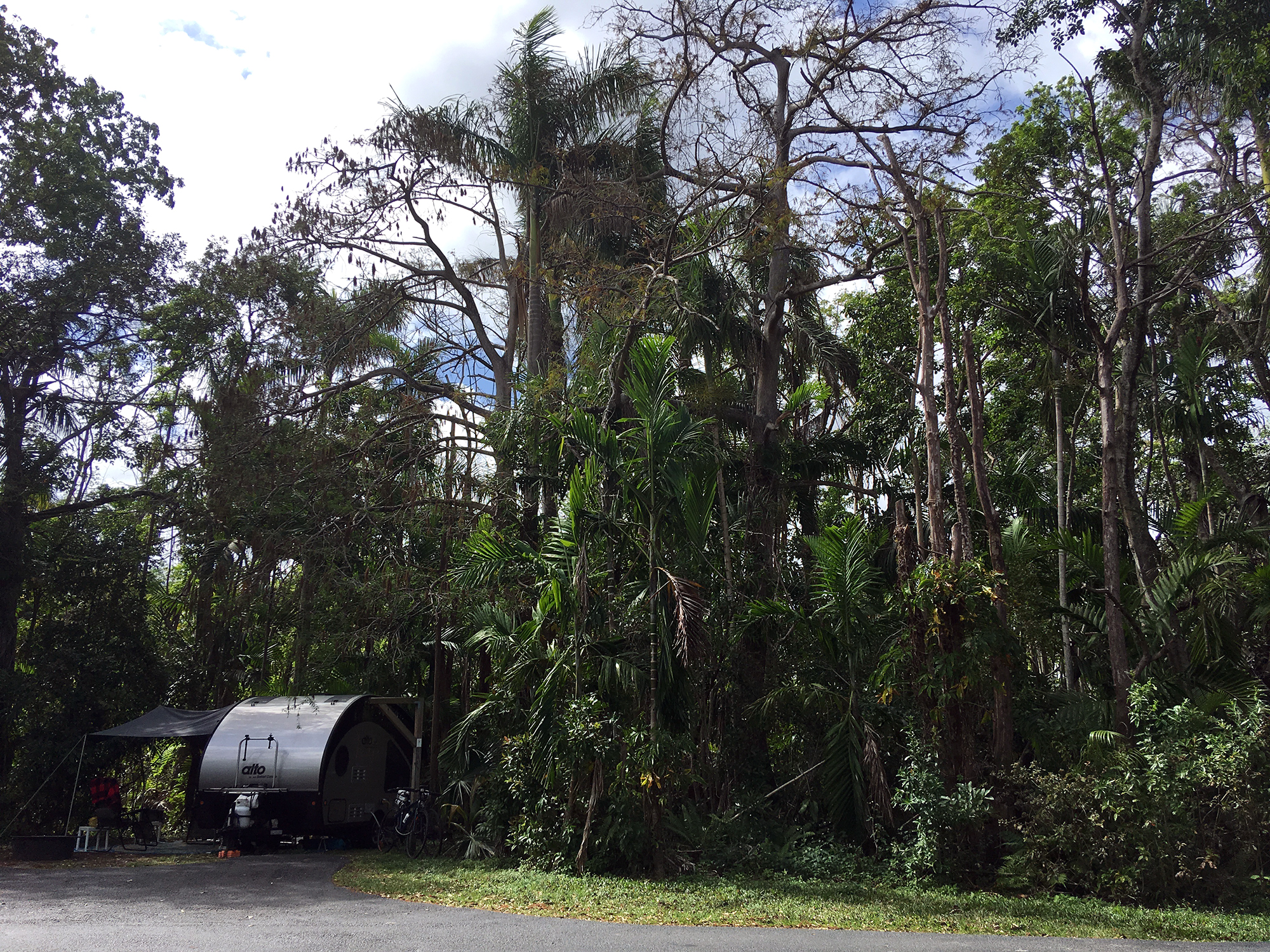 With the drive down the Keys on our agenda the next morning, we took the 1 all the way through Miami to Homestead. Of course this wasn’t until after making an important stop at Le Tub in Hollywood Beach to eat burgers bigger than our heads. I’ve heard Miami traffic is crazy and we can now attest that that is certainly true. At least there were trippy lightshows of dancing people on the sides of buildings to keep the drive interesting. We eventually parked up in Homestead and stayed the night in a Home Depot parking lot about 40 min north of Key Largo. 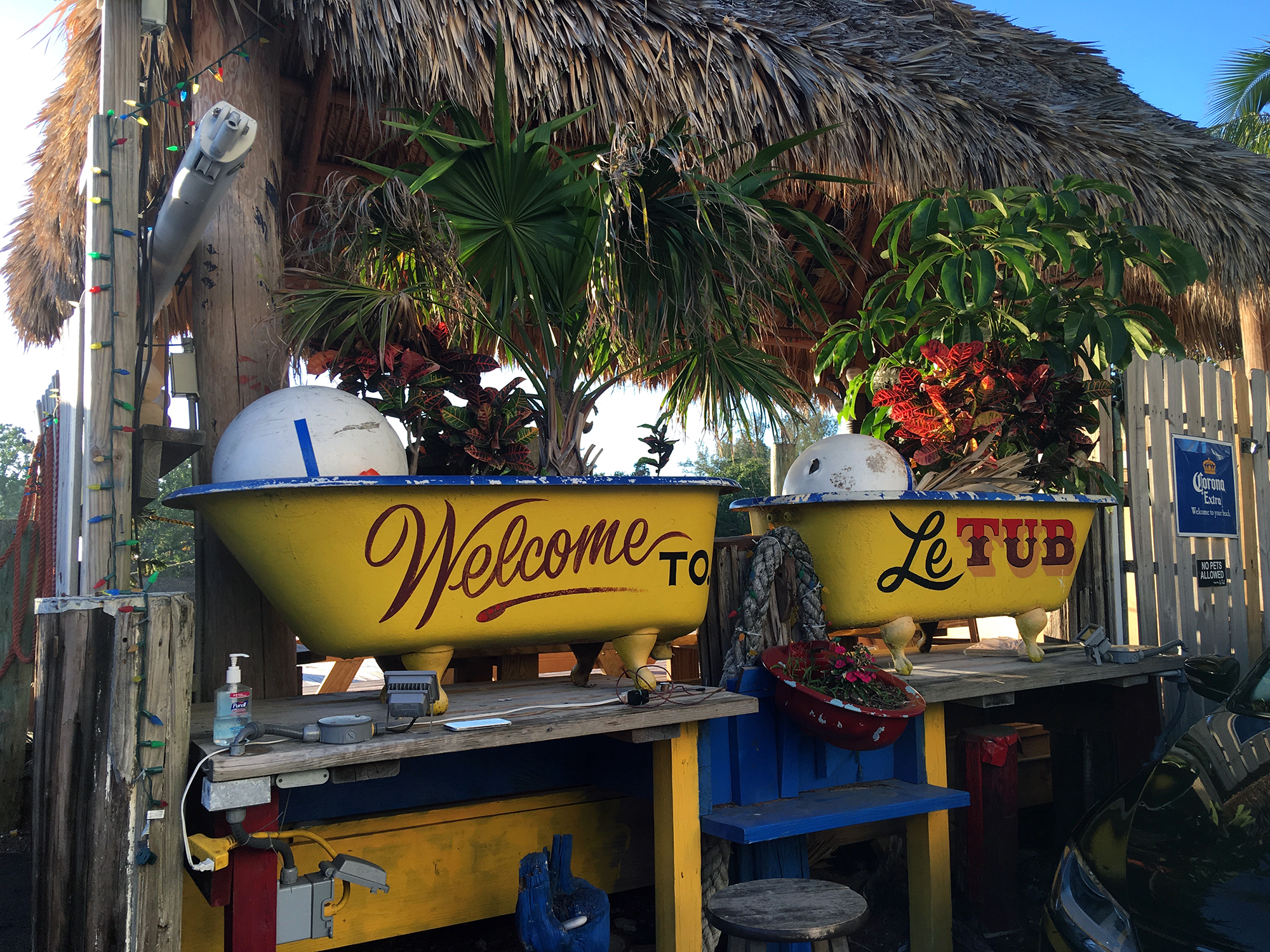 The much-anticipated drive down the Keys was well worth the excitement. Gorgeous views from every angle made it hard to not daydream about spending the day boating to a far out sand dune to have lunch like many of these boaters seemed to be doing. Even with the beautiful turquoise waters glistening in the sun, it was evident that hurricane Irma made a lasting impression on several of the Keys, especially Islamorada and Marathon. Piles of debris lined the highway and left behind not-so-distant memories of beautiful beach homes and pristine beaches. In fact, we drove past to see that even the KOA was closed for reconstruction. It’s clear that, similar to Texas, some areas have more money than others to clean up and rebuild, leaving virtually no trace of disaster. That being said, we drove out of the Keys on a Saturday and saw groups of people scattered around working together to clean up. As unfortunate as these things may be, the community coming together to help each other is always a good aspect of the outcome. Even our broken mirror looked gorgeous in the Keys!

Reaching Key West, we were on a mission to find a private parking lot that we could pay to park in for the night, as per advice from other vanners. Camping in Key West is known to be next to impossible unless you’re cool spending over $100+ a night and booking a campsite months in advance. After passing by several parking lots with blatantly posted signs stating “No RVs, trailers or campers” or simply, “overnight parking prohibited”, we went to a hotel to ask to park in their parking lot. The guy at the front desk said they don’t allow that but there’s no need anyway because in Old Town, you can freely park on the street. In his words, as long as you’re not in front of someone’s house, on the yellow lines or parked “backwards” (backed in) then you’ll be fine. He assured me that there’d be no trouble and that he had my back if the police had anything to say about it. Of course I left out the minor detail that we’d be sleeping in the van, but at least I made a new friend. We parked not far from the hotel in an area with a bunch of other cars, away from any main streets. We closed all the curtains, put our sun shade in the windshield and walked into all the tourist action to load ourselves with beverages. 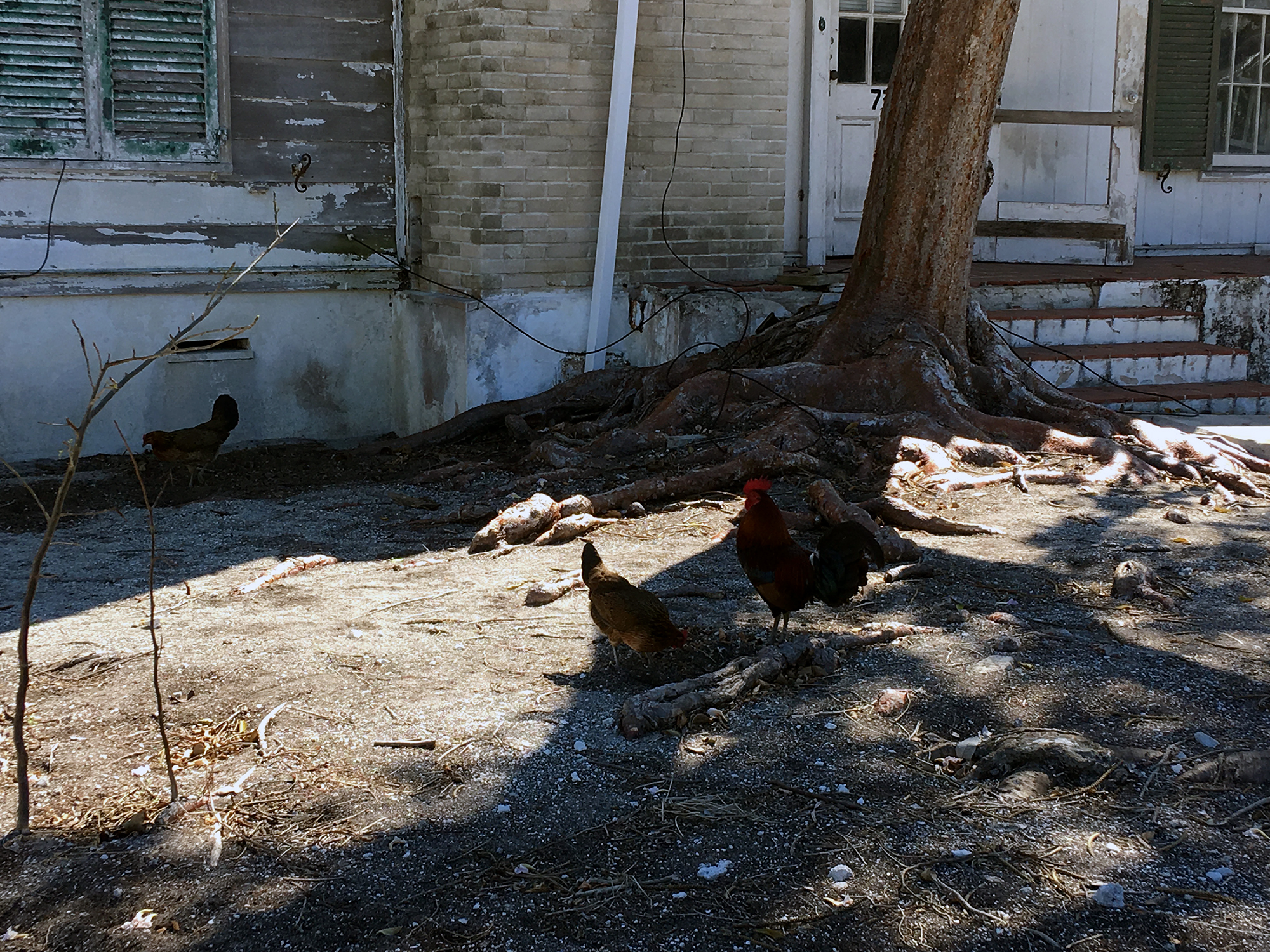 Street parking meant we had some rowdy neighbours. They were roosters.

A must-see on our short trip was the Hemingway Home; a gorgeously preserved home filled with polydactyl cats, what’s more to love? Go on the tour and hear the facts and stories for yourself but I’ll just tell ya that this house is lovely and complete with every creative’s dream, a private studio. Walking around the property was surreal, especially for me as my 17 year old self got a quote from The Old Man and the Sea as my first tattoo (yes, I thought I was cool). After spending some quality time with the kitties, we had some delicious food at Santiago’s Bodega before eventually ending up at the tastefully divey Whistle Bar on Duval. A second-floor bar with a wrap around patio was a perfect choice for observing a night in Key West in full swing. Bonus, the third floor of this place is a clothing optional bar called Garden of Eden if that strikes your fancy ;). We stumbled back to the van and discreetly climbed in for the night. Stealth camping is always a gamble so be cautious to not let residents see you and of course, be as quiet and unobtrusive as you can be. From what I’ve read, sleeping in your vehicle is harshly punishable there and the police like to throw out the jail card. With looming paranoia and incredibly vocal roosters going all night long, it wasn’t the most peaceful sleep but a free stay in Key West nonetheless! 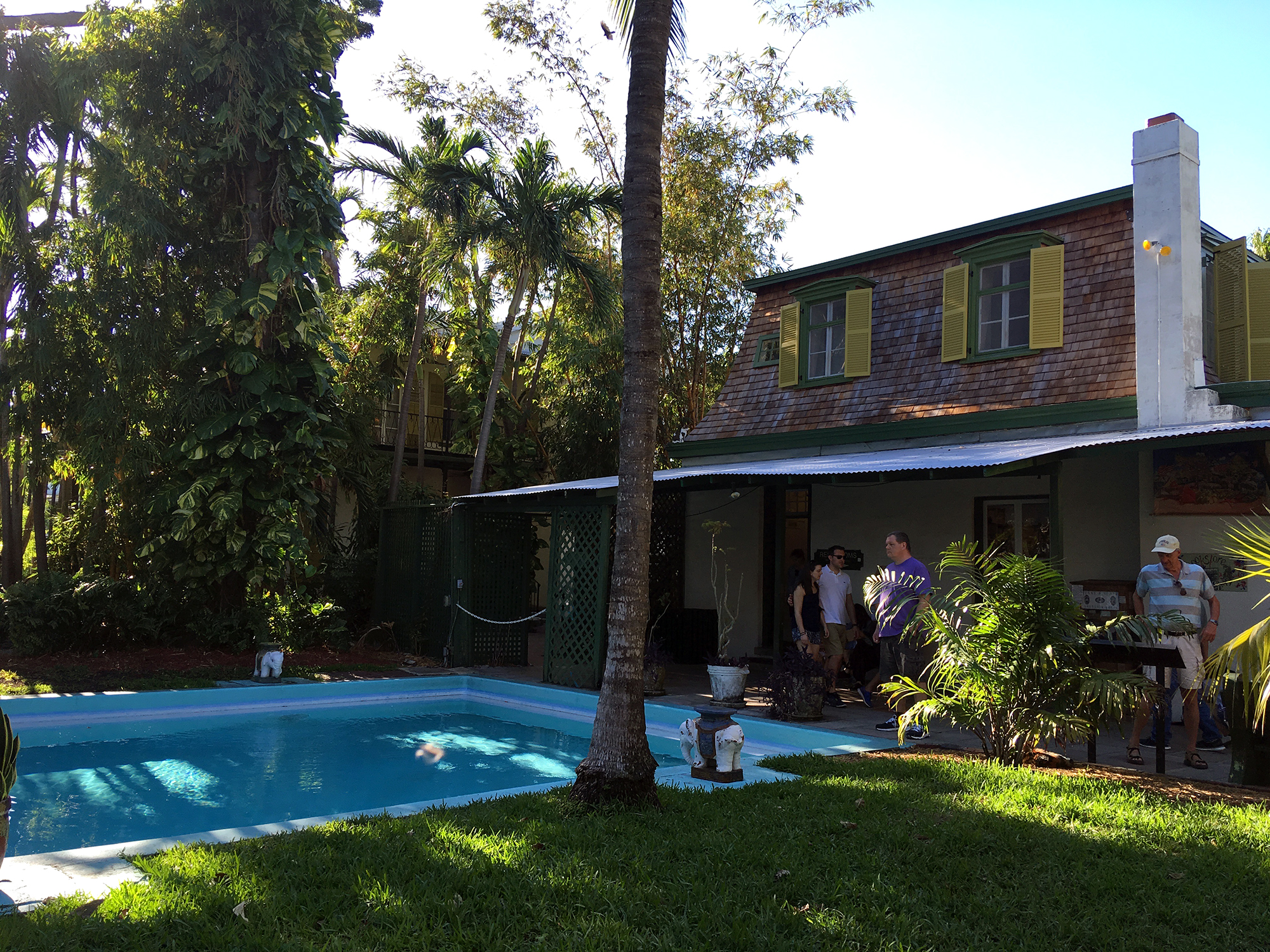 The drive out was somehow even more beautiful and we made sure to stop on a couple other keys to take it all in. The only thing that would have made our stay better would have been seeing a key deer but we can’t have it all can we. We had our mid-day breakfast on Coco Plum Beach, near Marathon Key, before heading to the Everglades for an airboat tour that we scored a wicked deal on (thanks Groupon). We went to Coopertown, a town with a posted population of a whopping 8 people, for the “original” airboat tour. If you do click this link to go to their website, please enjoy as much as I did that their official video is a clip from Bridget’s Sexiest Beaches, a travel show by Playboy Playmates. Unfortunately there weren’t any Playmates present when we went but we did see 3 gators! This was so satisfying since our eyes were peeled whenever we were by a swamp in Louisiana, to no avail. Riding the gator high after the tour, I spotted at least 10 more gators hanging out along the banks and swimming in the swamps on our drive west out of the Glades along Big Cypress Preserve. Wildlife was the name of the game with several signs warning of panther crossings but like the key deer, they remained a mystery. 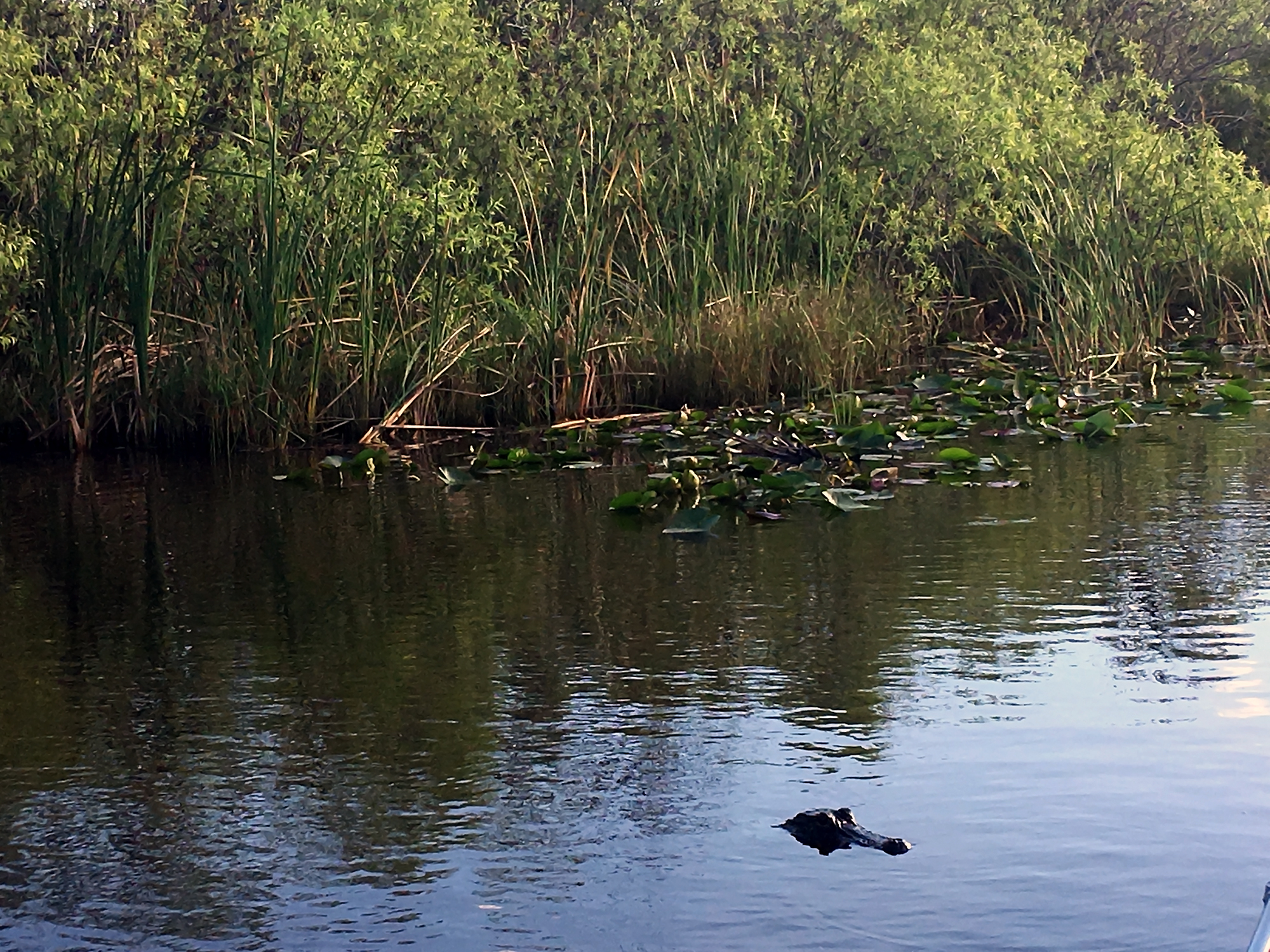 Click away for some more photos from lovely southeastern Florida:

Been to the Everglades? Done some stealthy boondocking in the Keys? We wanna hear about it!