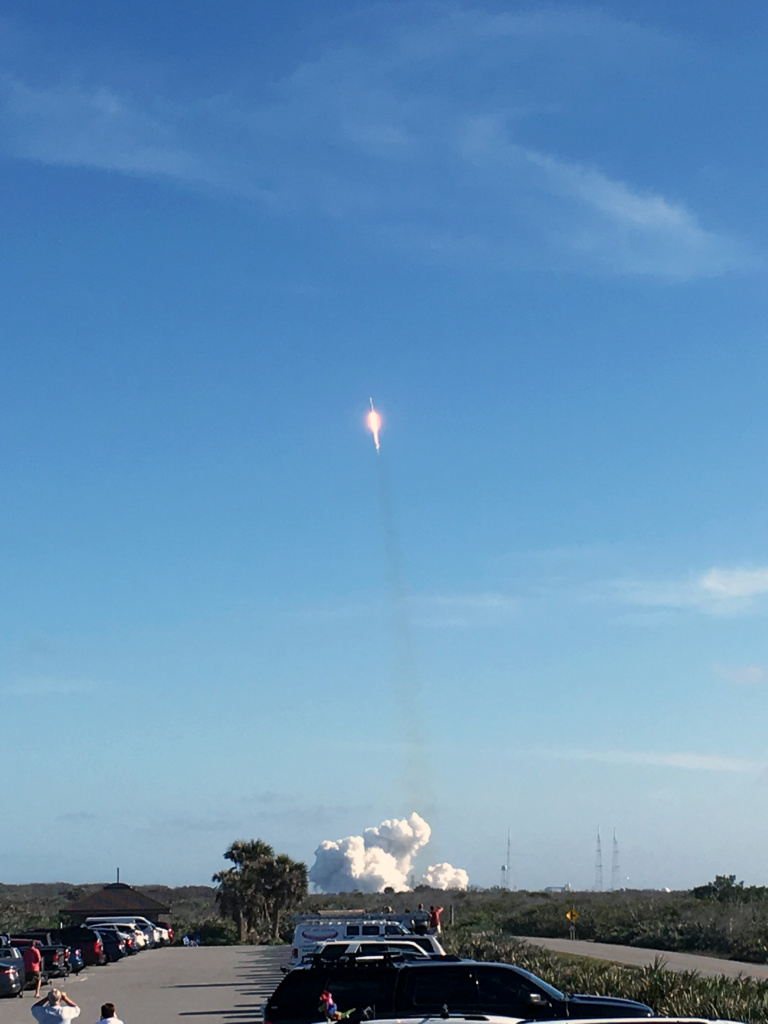 Tropical rain and free OJ – we must be in Florida! Although we weren’t quite at the ocean yet, arriving in Florida was a big milestone for us: we had made it to the complete opposite side of the country from where we started and this marked the 10th state on our journey so far. Over the past few months we’ve seen so much different scenery and interacted with so many different types of folks that we were kind of excited to go somewhere where we had been before and see it from a different perspective. That being said, northwestern Florida was still new to both of us – although I just found out that Jaws II was filmed there (!!). 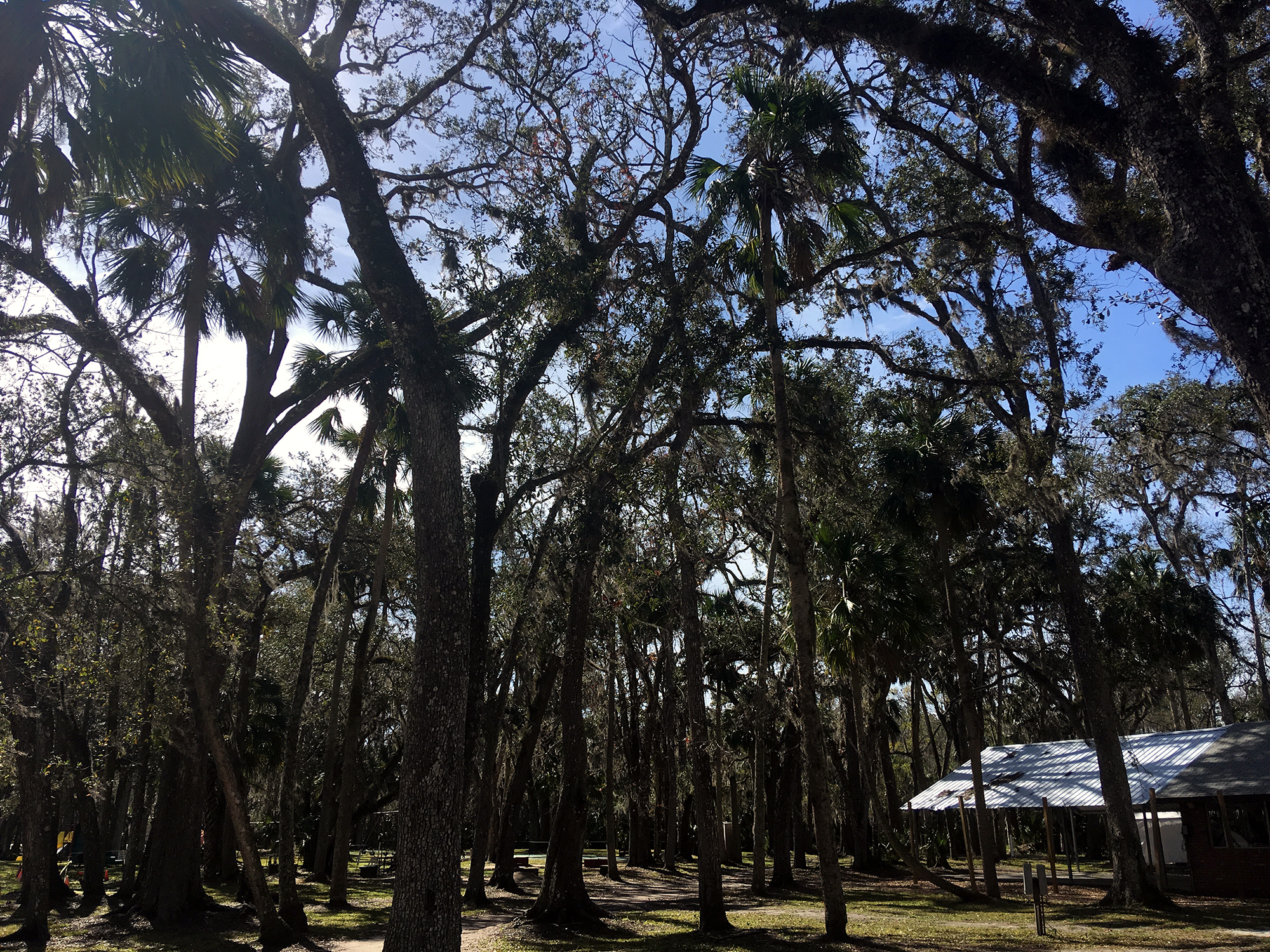 From Pensacola, we took the scenic highway 98 so we could soak in all that sweet coastline before planning to make the brief overnight stop at a boat ramp in Navarre when everything exploded. Ok, some context would be helpful. It all started when we innocently tried to charge our laptops through our 12V cigarette lighter inverter. We charge our phones and small things like flashlights all the time without worry and have even brought my 60w laptop to full power from the grave without a hiccup. However, Justin’s 85w laptop gave our 120w inverter a bit more than it bargained for. The little indicator light went red and it stopped charging. It’s a dud, we thought, until we couldn’t shake this nauseating rotten egg smell. We checked on the battery and it was definitely hot and sizzly but we only had 20 minutes left on our drive so we took it slow and cautiously coasted through what turned out to be more like a 40 minute drive because of a nearby car accident. If you’ve ever crossed from Navarre to Navarre Beach then you know that the skinny single-lane bridge is exactly that, skinny. And that’s when things started smoking. Did I mention that it was raining? Well, our windshield wipers started going so fast that they looked like they were about to fly off and slice someone’s head off like a katana (too much?). Seeing as there was no shoulder to pull over on, we parked at the first possible place – which was luckily a gas station just one lot over from where we were planning to stay – and turned everything off. After opening the hood and seeing steaming hot battery acid spewing out, we knew this baby needed some time to cool down. It appeared as though our voltage regulator (which we just replaced in November 2017) was shot so the alternator was working at breakneck speed and in turn, majorly overcharging the battery to a slow and stinky death. 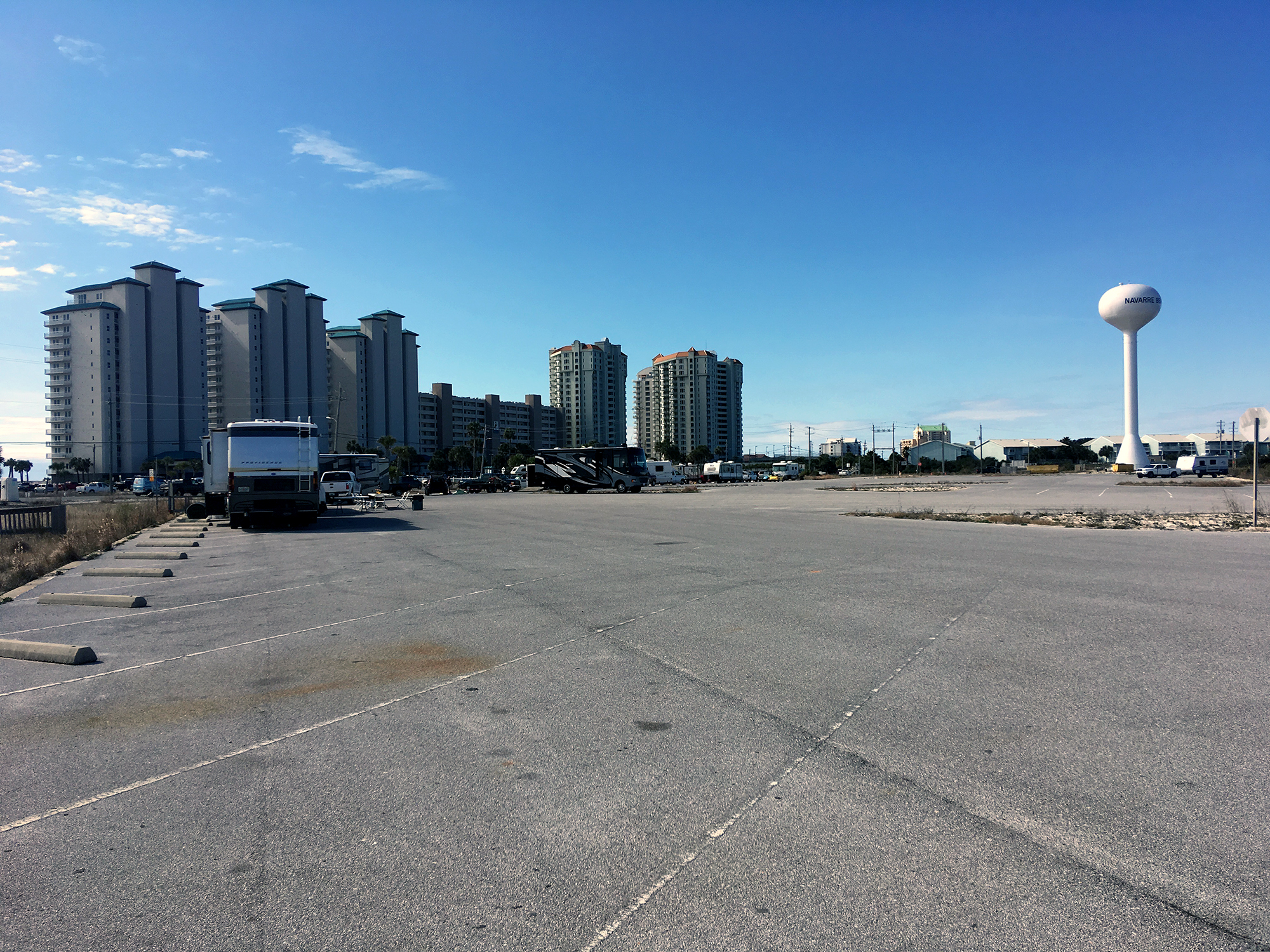 Calm before the storm. Unbeknownst to us, we happened to arrive with the keeners

We gave it two hours to cool down before trying to start it again so we could pull into the other lot to sleep and deal with the repairs in the morning. Wishful thinking I guess because as soon as we turned the key, this awful noise that sounded like a machine gun became deafening. Boost time! With the condition that our battery seemed to be in, we didn’t want to subject anyone else’s vehicle to possible risks so we phoned AAA and had a professional handle it. We got it started no problem but despite the cool down sesh, our battery immediately resumed sizzling and sent his voltmeter through the roof. Luckily it was about a 30-second drive to get to where we needed to be. This spot was one of those places where it didn’t say no overnight parking so it’s a gamble if someone will tell you to move or not. Our uncertainty quickly disappeared when we saw numerous RVs and campers lined up with crazy set-ups like propane firepits, outdoor big screen TVs and surround sound systems blaring ZZ Top (classic lullaby). Now, this is just a public parking lot but we soon learned that with a Mardi Gras Parade on the horizon, this place becomes a giant party for anyone who’s lucky enough to find a spot. 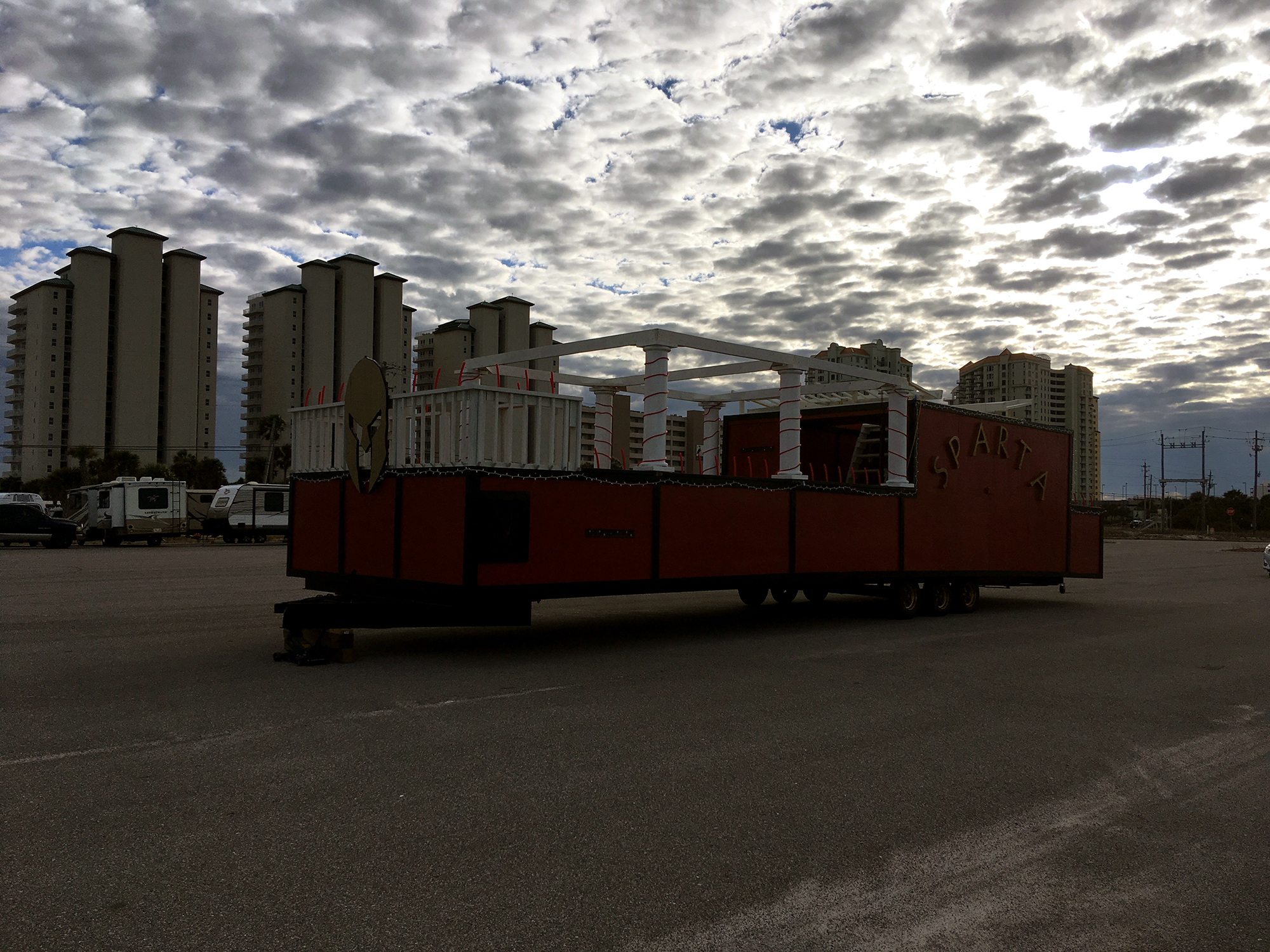 Just one of the lovely floats ready to hit the parade. This one even had a bathroom in it

Long story short, Justin took a lyft early the next morning to buy a new battery and regulator with the intention of replacing it himself – which he successfully did. As we rejoiced and beamed with pride, we were ready to take off when we realized the blinkers didn’t work. This enlightened us to the fact that nothing worked because it all exploded from the power surge so we spent the morning replacing every light bulb, motor and flasher we could. We also decided it was necessary to order in a new alternator so another night at the boat ramp it was! We actually ended up meeting a lot of nice people and having a fun time in the midst of all of our mechanical troubles. Once the new alternator was ready for business, we waved goodbye to Navarre and continued on the 98 through the sandy beaches of Destin and Panama City and moved inland toward Ocala. 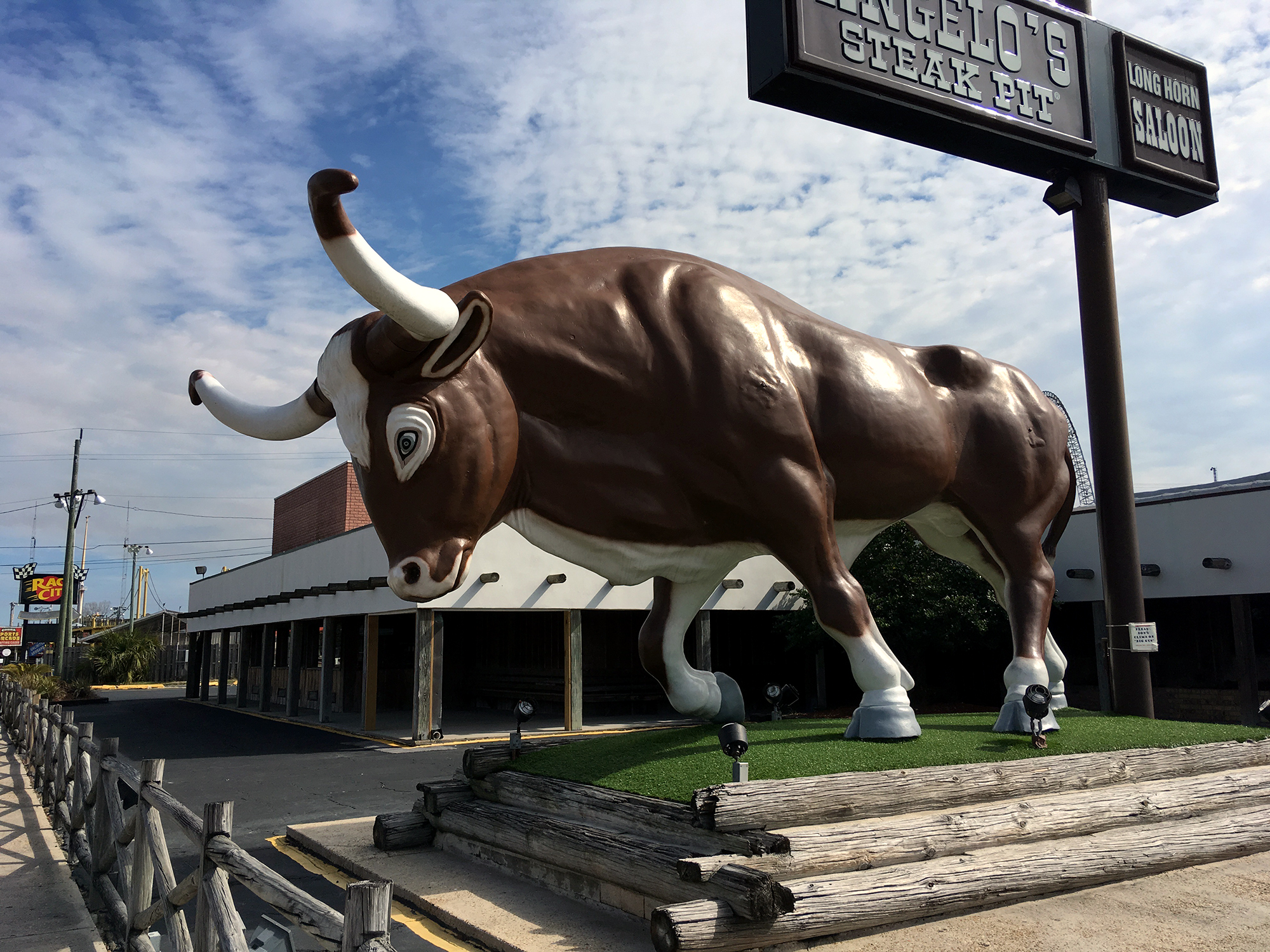 Meet Big Gus. Get acquainted with this 20,000 lb steer in Panama City Beach

Free camping isn’t as accessible in Florida as it has been in other states so we were happy to park up at a Walmart and recharge. The next day, however, we got to our spot early and looked around for something to do when there it was, BOWLING! It just so happened to be the weekend of a Florida State Seniors Bowling Tournament, which filled the place up with pros. Once they cleared out and it was safe to show off our shoddy amateur skills, we bowled the evening away and had a wicked time. With all the driving we do, it was nice to hangout for a while and forget where we were. That form alone would have had the seniors shaking in their boots. Good thing we waited til they cleared out. Wouldn’t have wanted to intimidate them

Making our way toward the coast, we drove down from Daytona Beach to New Smyrna Beach where we’d be staying for a few days to be close to the rocket launch (launch who? Everything you need to know about it here). We were hard pressed to find somewhere to stay for the work week since Florida snowbirds are in full swing and these launches bring in tons of tourists. We had been psyching ourselves out reading all the tips on Reddit to arrive in the middle of the night and how people were coming from all over the country to find a spot in the morning. With that, we woke up stupid early and headed toward Playalinda Beach on the Canaveral National Seashore. By 8AM, people had already set up shop at multiple viewing areas with huge cameras and telescopes. After a slow roll in, we got a spot in parking area 8 and realized that the view from the roof of the van was actually better than the view from the edge of the beach – and it had a stocked fridge. 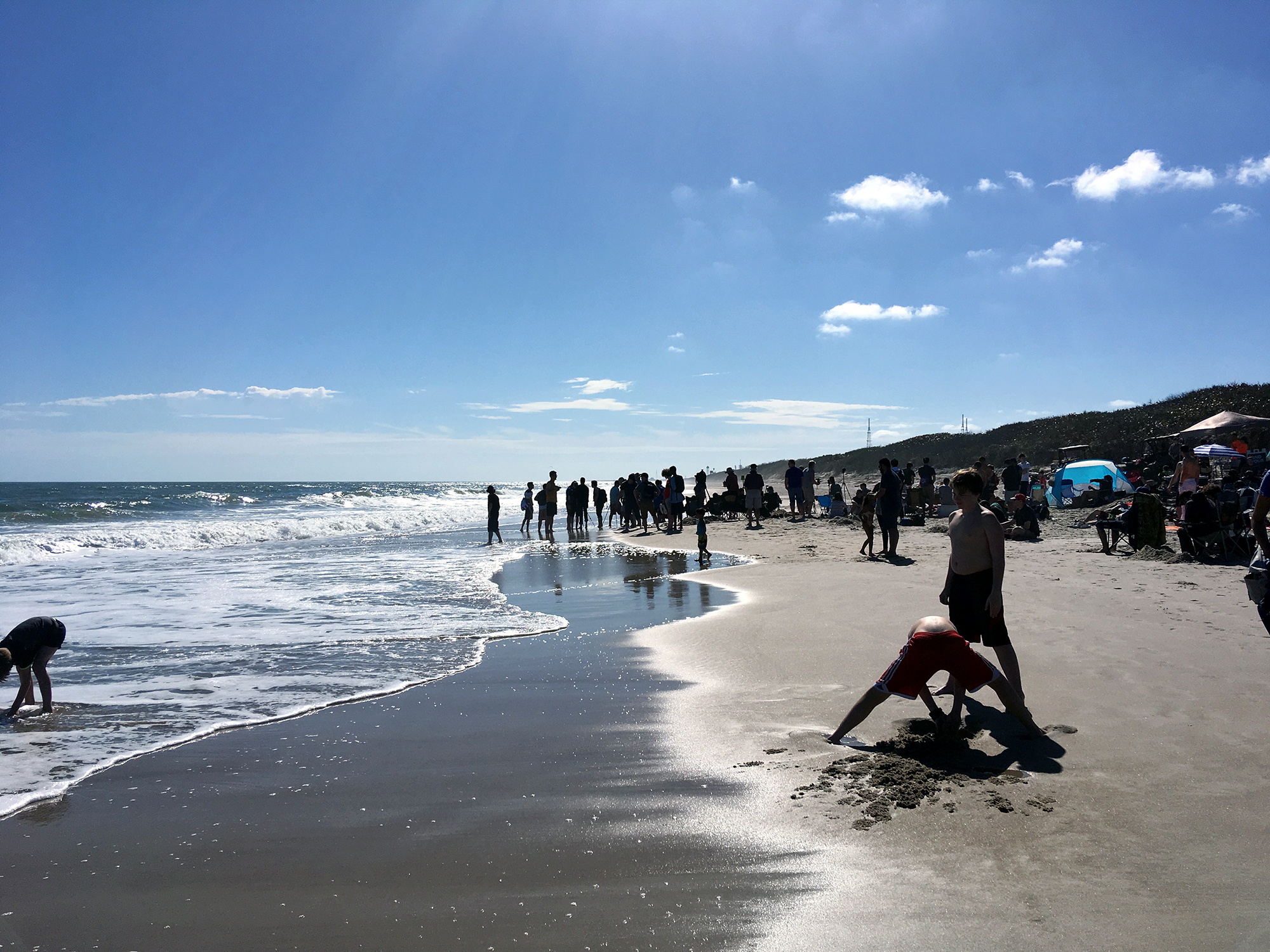 The edge of Playalinda Beach is as close as you can get to the launch pad without being at the Space Centre (~3.5 miles). Stop looking at that kid’s butt, you weirdo! 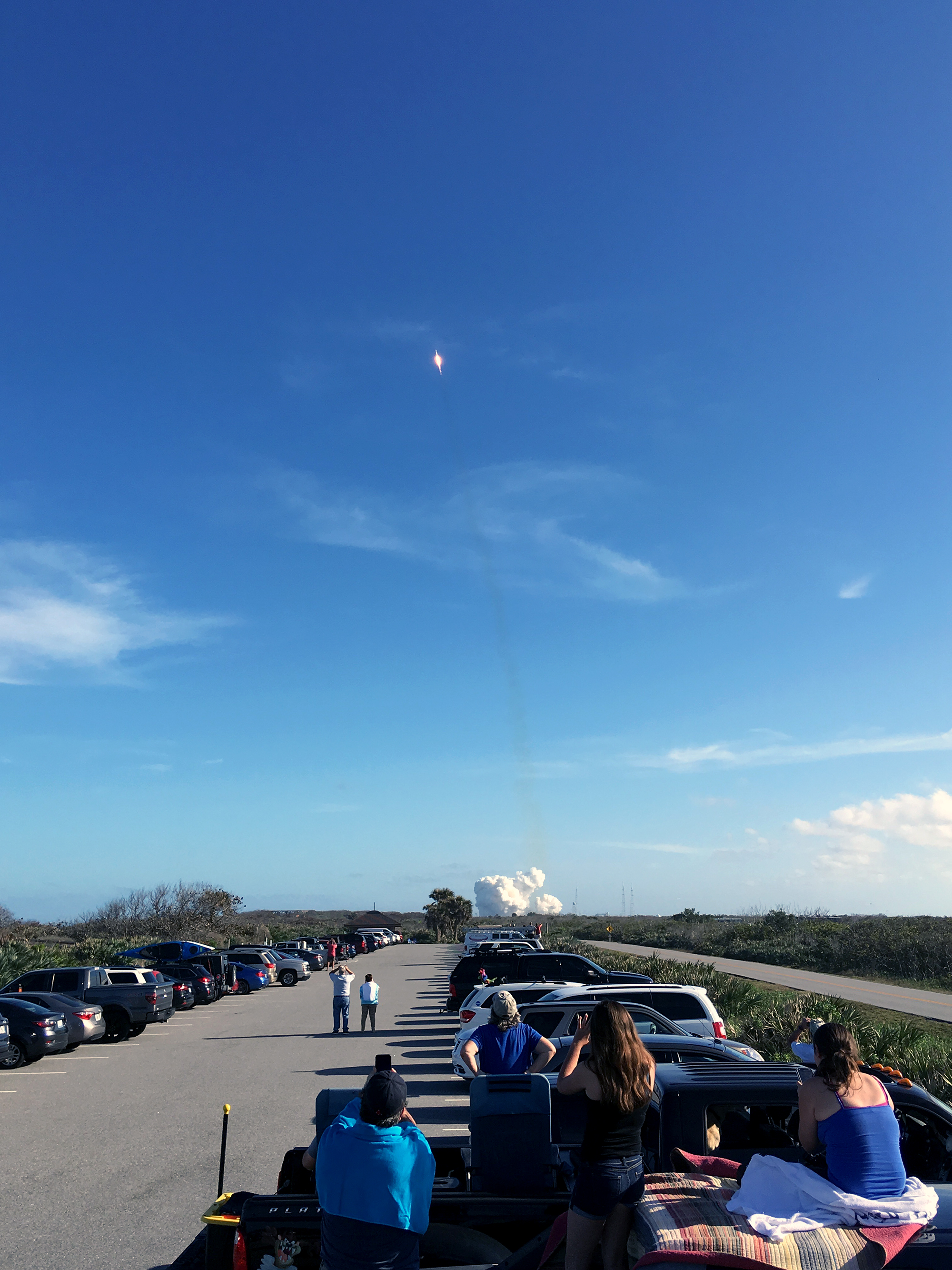 Alternating between sitting on the beach, the roof and inside, the launch got delayed multiple times and anxiety was rising. The latest update was for a 3:45 PM launch, with 4PM being the cut-off time. A lot of people thought it was going to be a scrub and left to livestream in air conditioning at home. Low and behold, 3:45 rolled around and crowds of silent people watched in awe as the Falcon Heavy blasted into the sky. It was insanely cool and something we never thought we’d get a chance to see in real life. One of the craziest aspects was the delay in sound – we watched it quietly blast off only to hear the giant boom a good 30 seconds later as the van shook uncontrollably. We couldn’t help but take note of how many different types of folks were there with license plates from all over and think of how positive of a thing this was to bring people together. Undeniably history-making in the most wonderful way possible. But, with all these folks came immense traffic. To be expected, of course, which made it extra entertaining to watch people decide to turn around and angrily mouth off about how outrageous it is to not move an inch in 15 minutes. What was a 20 minute drive over the bridge to get in became a 3 hour drive to get out. Again, that stocked fridge thing comes in handy.

With the rocket launch over, it‘s time to start heading down the coast toward the Keys. It’s February and we just put all of our winter gear away and don’t mind it one bit.