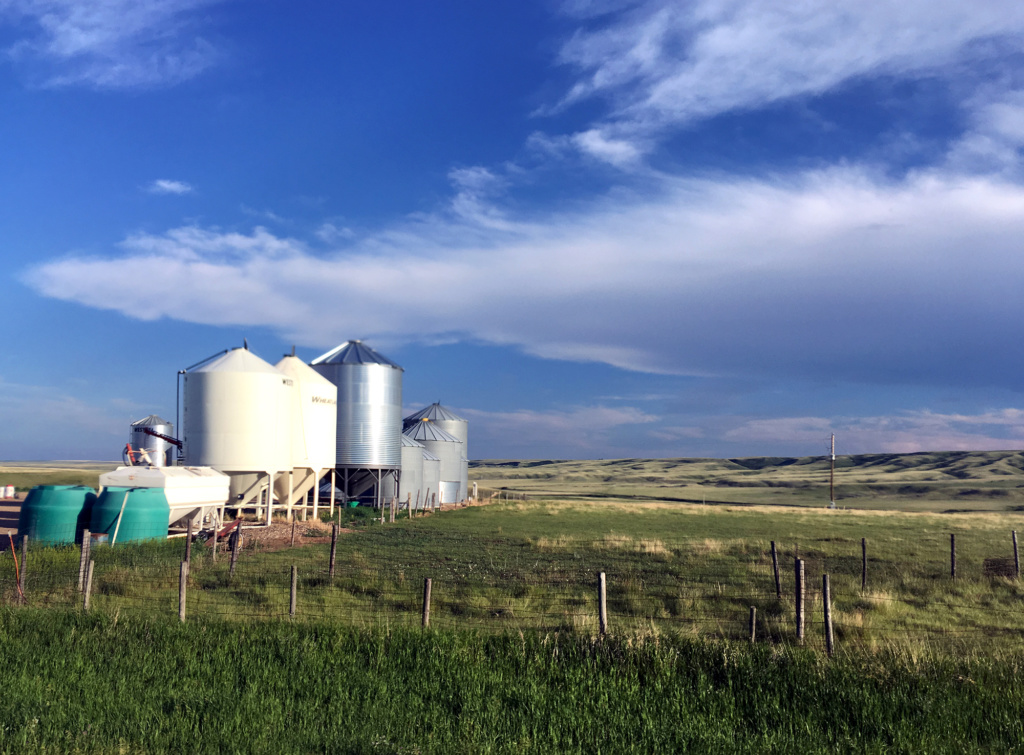 Took the north route through Kindersley and Saskatoon before spending the day in Canada’s Dead Sea in Manitou Beach, Saskatchewan.

We’ve finally gotten to the part of the map where every Canadian has flashbacks to elementary school learning about Saskatchewan, its endless wheat fields and…that’s about it. The prairies get a bad wrap in the scheme of cross-country road trips and are often the zones people devote to full day drives in a hurry to get to Alberta or Ontario because they’re summarized in one word: boring. Well, we were on a mission to give Saskatchewan and Manitoba a fighting chance at stealing our hearts by giving ourselves two weeks to drive across them. To put that into perspective, it only takes about 11 hours to get from the edge of Alberta to the edge of Ontario so we were really going to be taking our time. 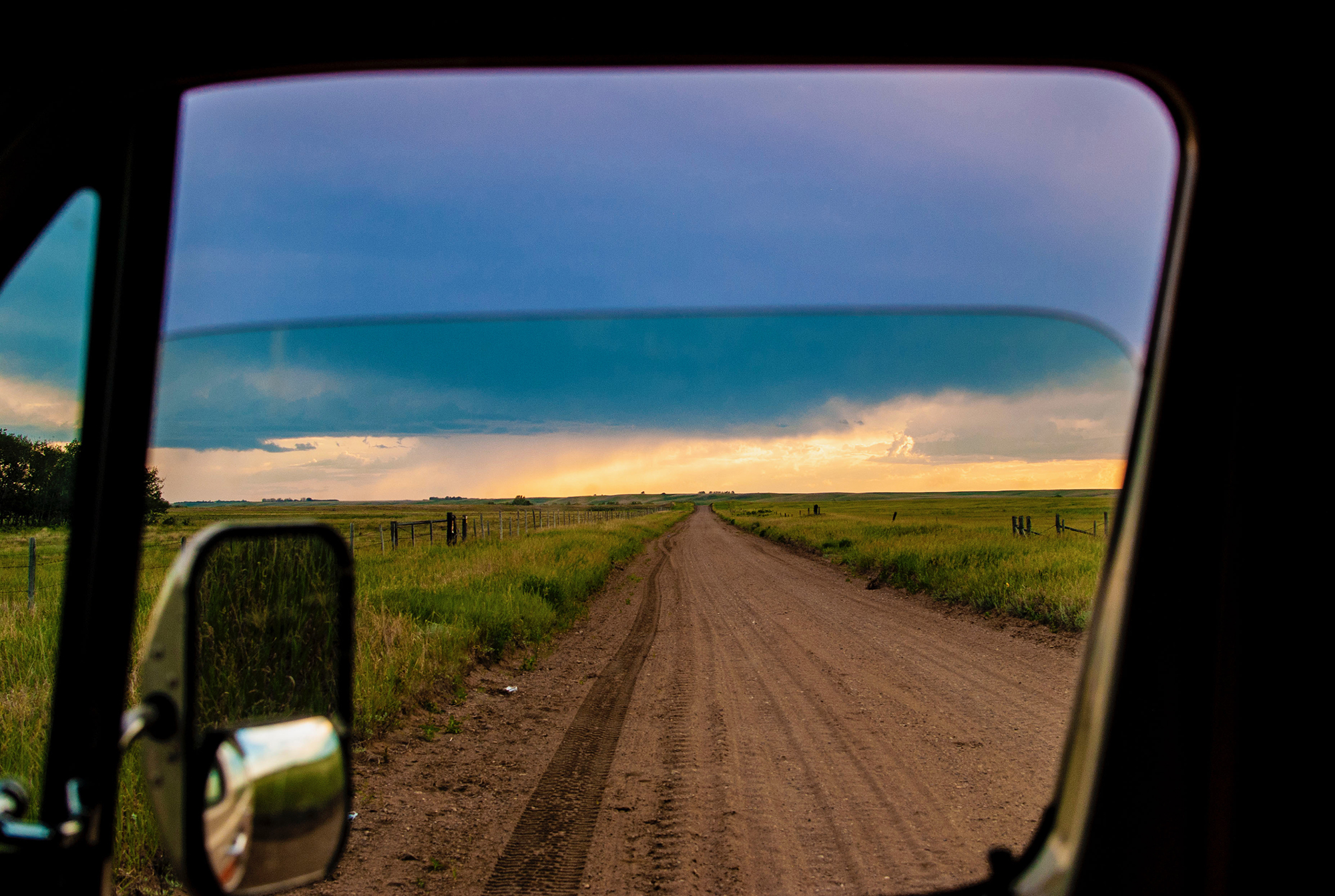 Coming from our last campsite in Sunnynook, Alberta (necessary side note: this is very close to Hanna, AB – proud home of everyone’s favourite band, Nickelback), we immediately felt the difference after crossing the provincial line when the road turned into a pothole-ridden nightmare. In any case, we were ready to do some trail blazing in hopes of uncovering a sweet camping spot on some of Saskatchewan’s plentiful Crown Land. As we’ve mentioned before, when it comes to free camping spots, Canada as a whole is way under discovered in comparison to the plethora that is BLM land and National Forests listed in the States. With our government land maps in tow, we set out to find somewhere to camp for the night where we could watch the big sky light up with stars in the evening. After making a pit stop in Kindersley, we headed north to a small lake surrounded by federally owned land that seemed promising. Unfortunately, the only way to access it would be to drive through a farm field filled with waist-high canola crops. Bummer. Our next possibility brought us to a muddy lot that had been inhabited by a sea of pump jacks, which was certainly not what we had in mind. As much as we were still hopeful that there was a hidden gem of a spot somewhere in the area, there was an angry storm brewing in the distance so we swallowed our pride, headed back to the main road and made our way to a rest stop near a town called Harris. 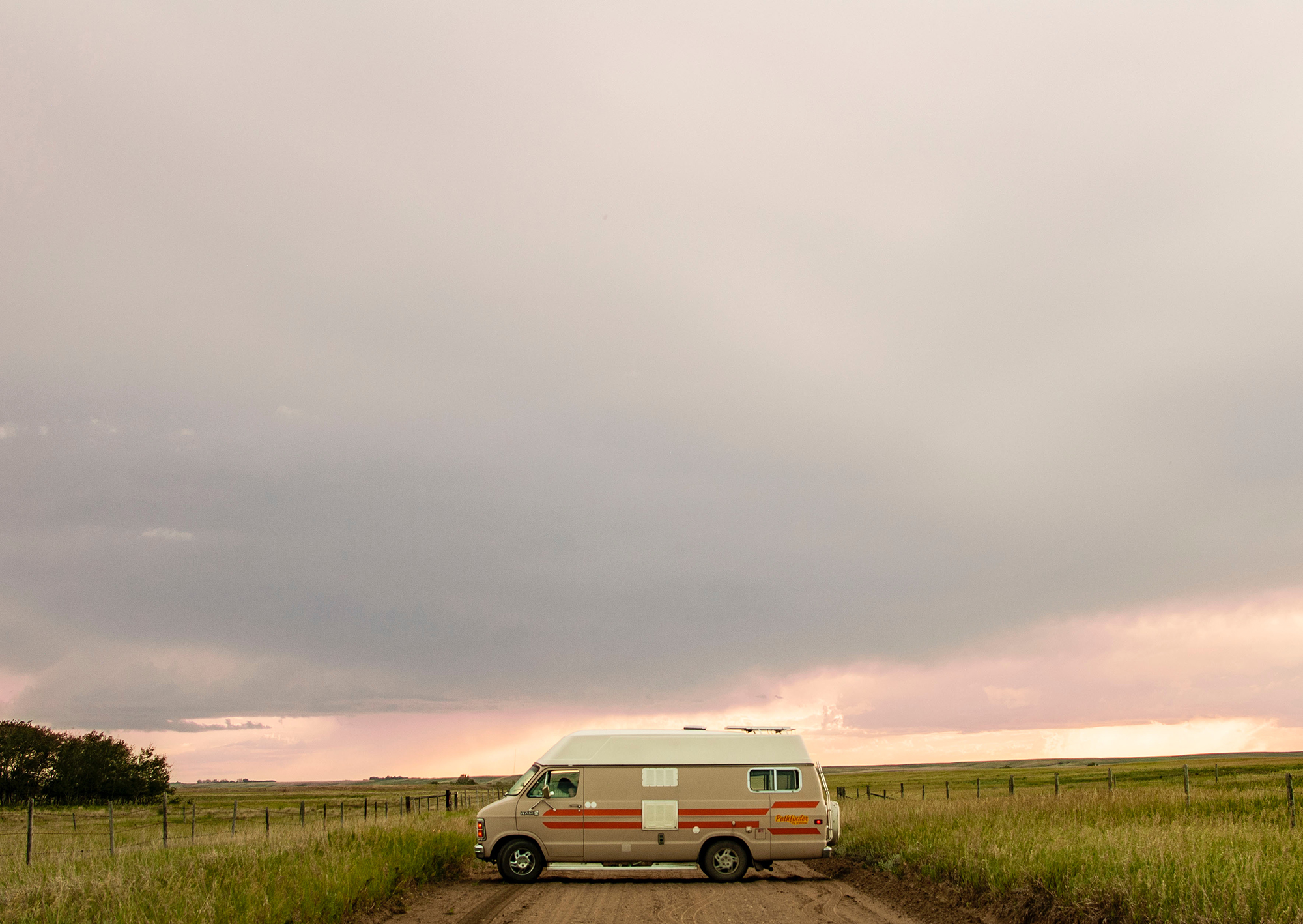 Now, a rest area is not really what we had foreseen for our cool campsite discovery but when we arrived, we realized that rest areas in Saskatchewan are not like rest areas anywhere else. In the US, they’re generally paved parking lots with vending machines and air conditioned bathroom buildings while in Canada, they’re often small roadside turnouts with an outhouse or two. In Sask, they’re pretty much campgrounds. Huge grassy areas with outhouses, fire pits and picnic tables and even clearings within the trees for little private campsites. At this point, we were asking ourselves why we didn’t just come here sooner. We even found a few small prickly pear cactuses in the bush that made us question if we were really in the prairies or had somehow been transported to a secret realm in Arizona. We had a super peaceful night’s sleep and even got to admire that big, colourful sky that we knew was waiting for us. 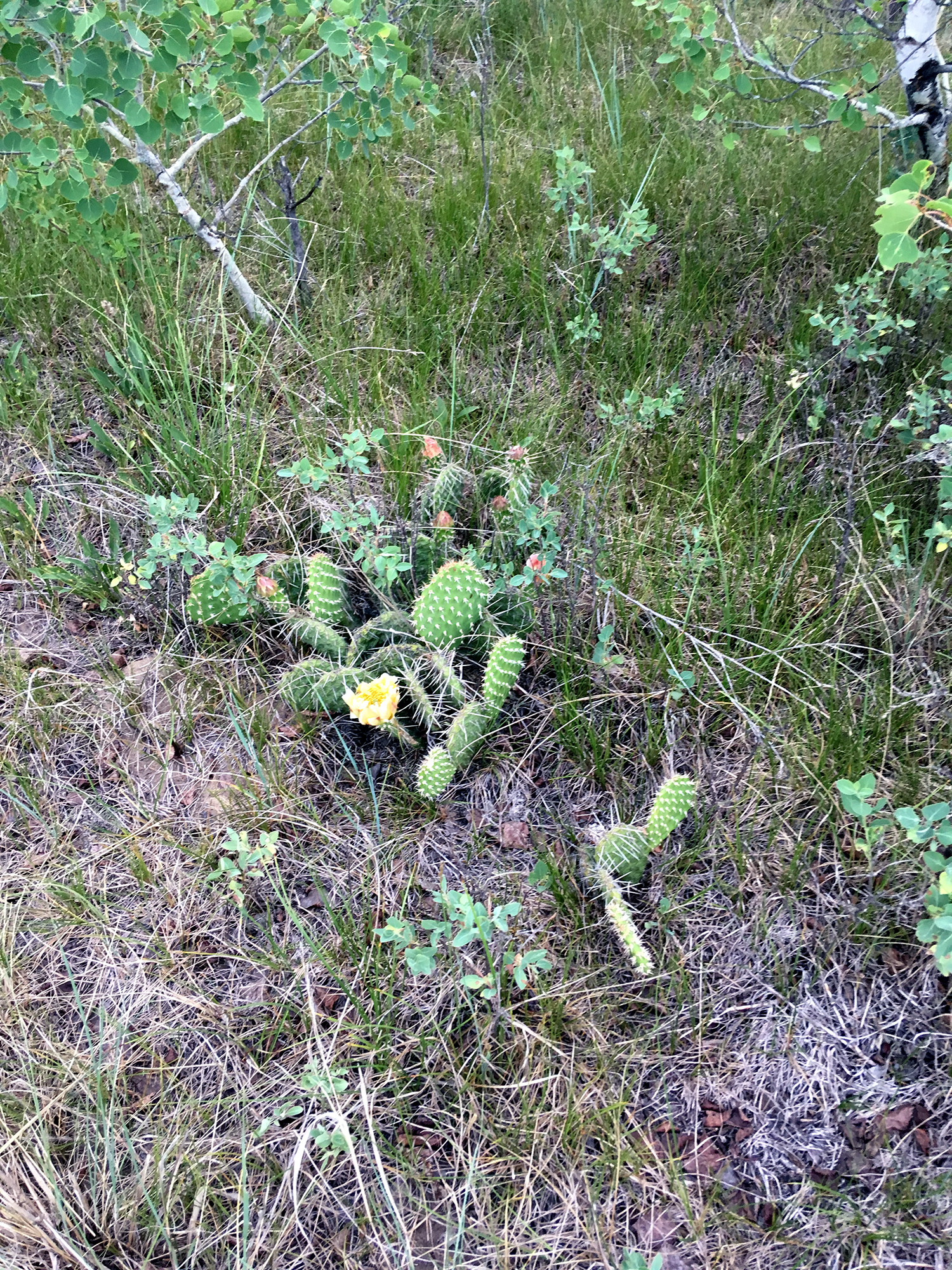 Say what? Who woulda thunk there’d be cactuses in the prairies

The next morning, we hopped on the highway and hit the big city, Saskatoon (using the term “big city” rather lightly). Justin had driven around Saskatchewan many times but being my first time, we opted to go through Saskatoon instead of the capital city of Regina because quite simply, it’s nicer. We settled into a café in the Riversdale neighbourhood to get some work done before taking a stroll around and seeing what the city is all about. This neighbourhood is definitely in the eye of its gentrification and has opened up to a bunch of cool shops and restaurants on its short stretch of street. Scattered amongst older, grittier buildings and storefronts, it’s close to the Central Business District and the Saskatchewan River. We grabbed a bite at Picaro, because everyone knows Saskatoon is known for its tacos… Jokes aside, they were actually really tasty and the space felt like it could belong in a much bigger city. 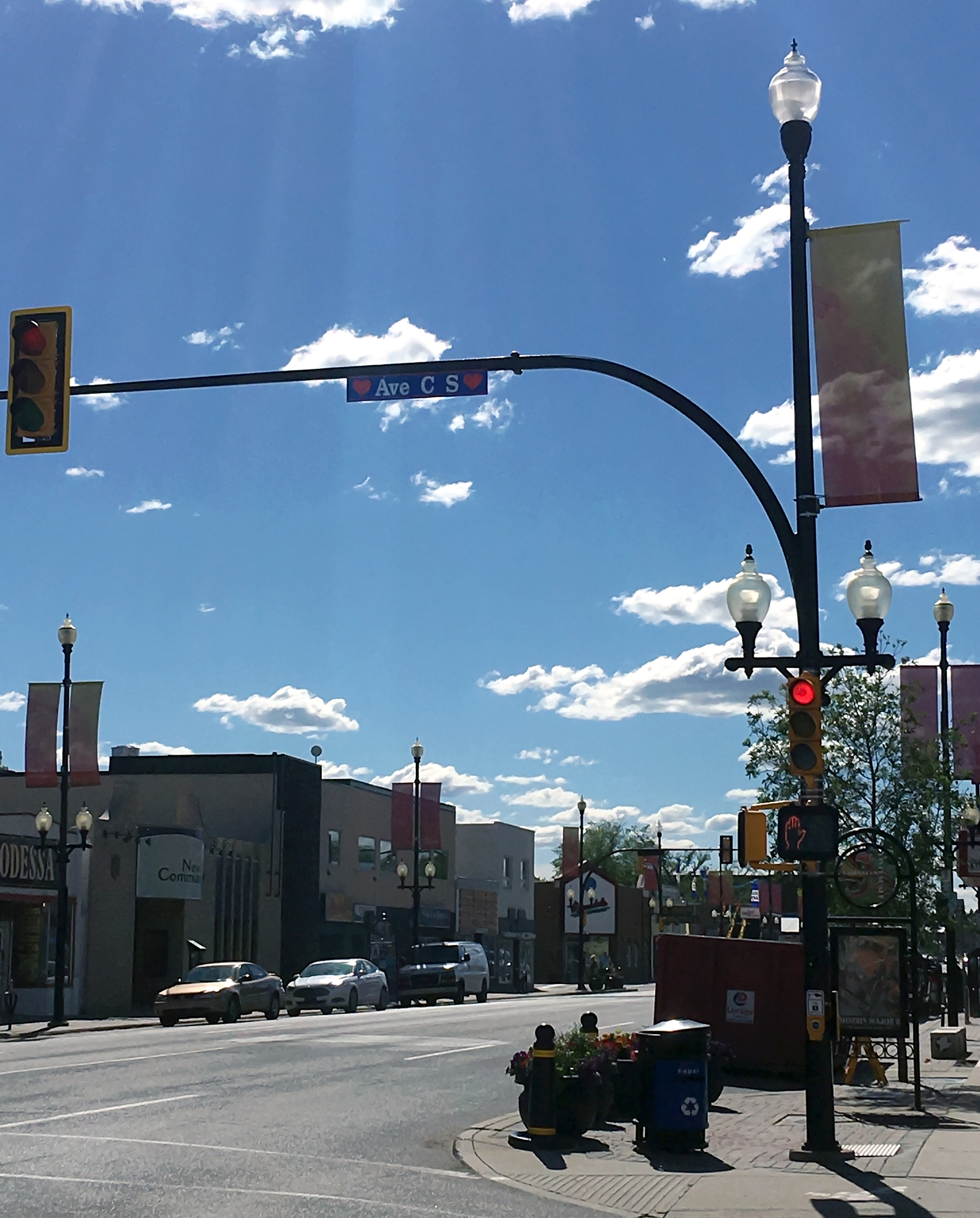 With our bellies full, we ventured over to the Broadway area across the river, which to our dismay, seems to close down around 5PM. Definitely a drag but it seemed like another cool spot to check out if we pass through again. Overall, Saskatoon is far from a bustling city but surely has some interesting pockets to explore amid their adorable street signs decorated with bright red hearts. Based on our experience at the rest area the previous night, we opted to check out the next rest area along the Trans-Canada Yellowhead Highway instead of finding a stealthy spot in the city. About half an hour east of town near Elstow, we arrived at another grassy field that was again, more of a campground than a rest area. Score! 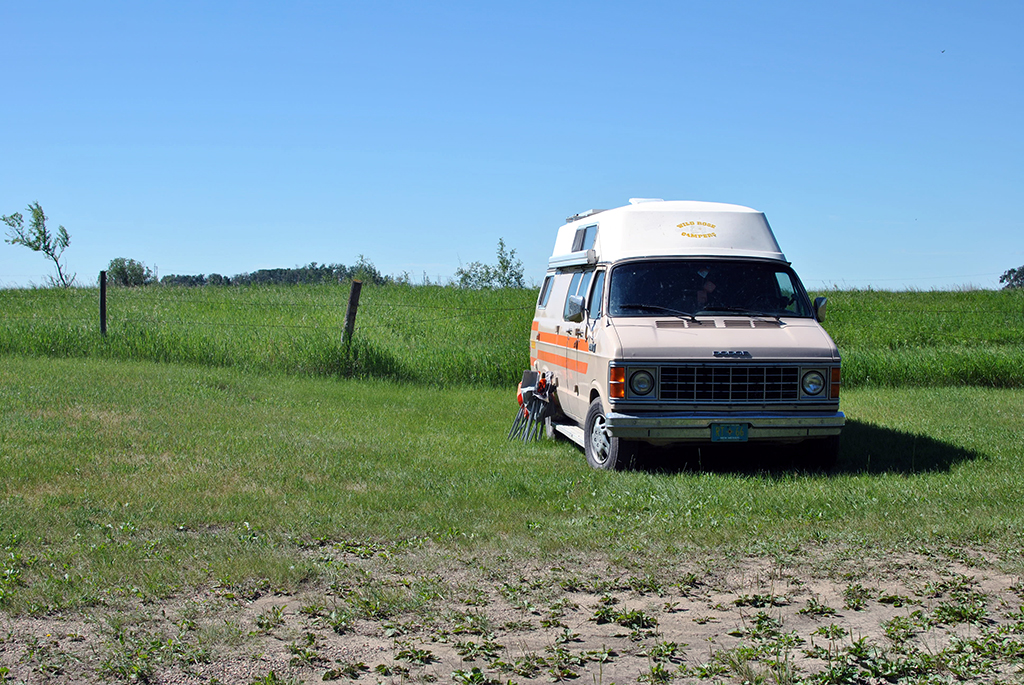 Can’t complain about calling this home for the night!

With all that city life the previous day, we switched gears and set out for the beach. The beach is certainly not the first thing I think of when it comes to a day in Saskatchewan but with Little Manitou Lake in the distance, it turned out to be a really cool surprise. The lake is considered to be Canada’s Dead Sea, as it’s 3 times saltier than the ocean and half the salinity of the actual Dead Sea. Basically what that means is that it’s extra gross when you get water in your mouth BUT it’s super easy to float. Turns out that there’s a whole little beach town around this lake that’s got a burger joint, beach bar and a bunch of lakeside cabins. It’s far from soft white sand but it was a great place to spend a 25°C/77°F day and the best part about it was that the bathroom building had hot showers so we left cleaner than we came. Any vanlifer knows that you take full advantage of these opportunities because they’re often few and far between. 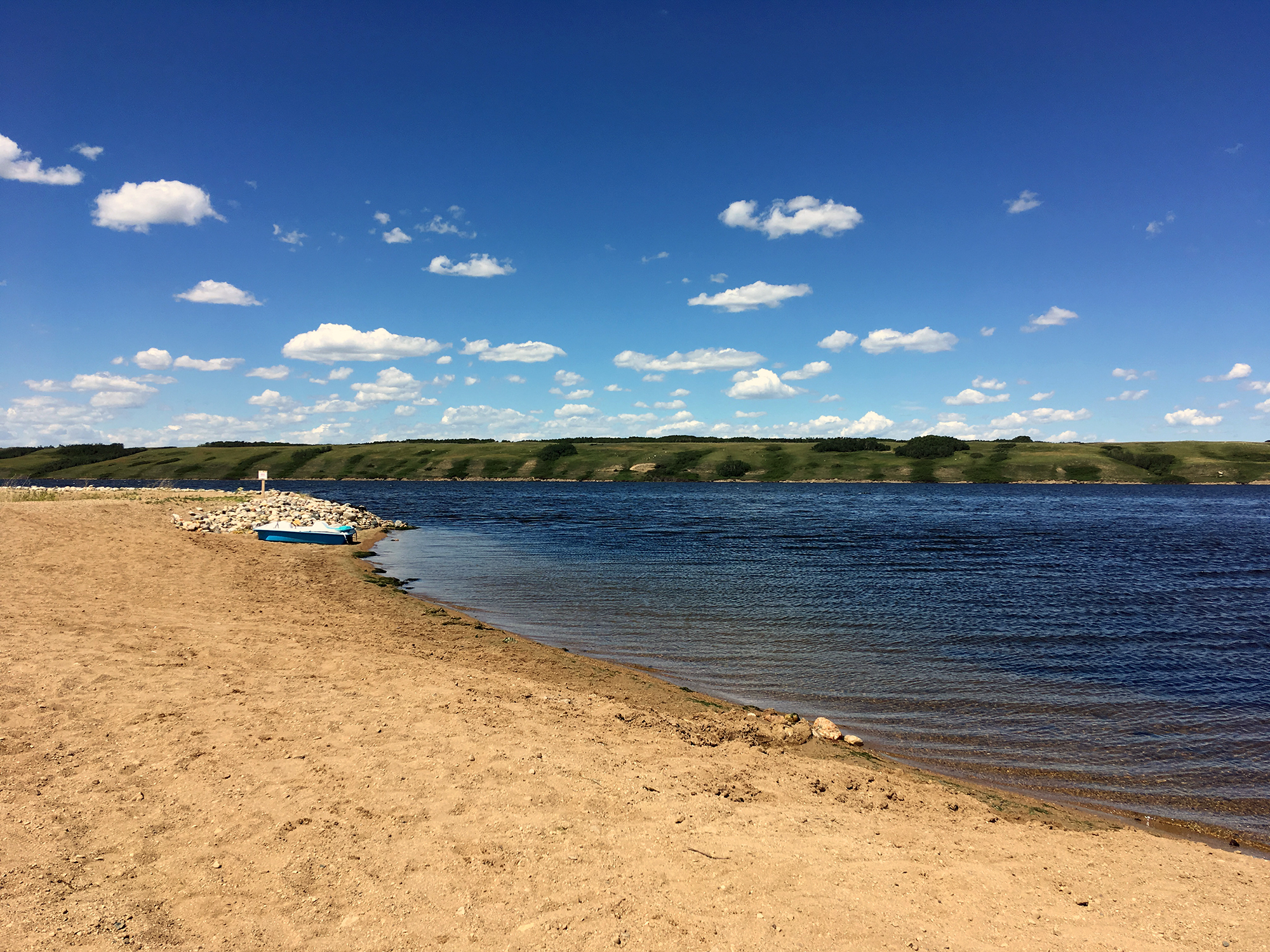 Continuing on our rest area tour of Saskatchewan, we found another spot near Lanigan that continued to perpetuate our finding that rest areas are where it’s at when travelling through the province. Unfortunately, I seemed to develop a not so nice case of hay fever and the amount of grass we’d been around was not agreeing with my newfound allergies. We decided to stay at this spot for a couple days and following WebMd’s orders, I stayed inside and got up close and personal with allergy pills and eye drops – fun! 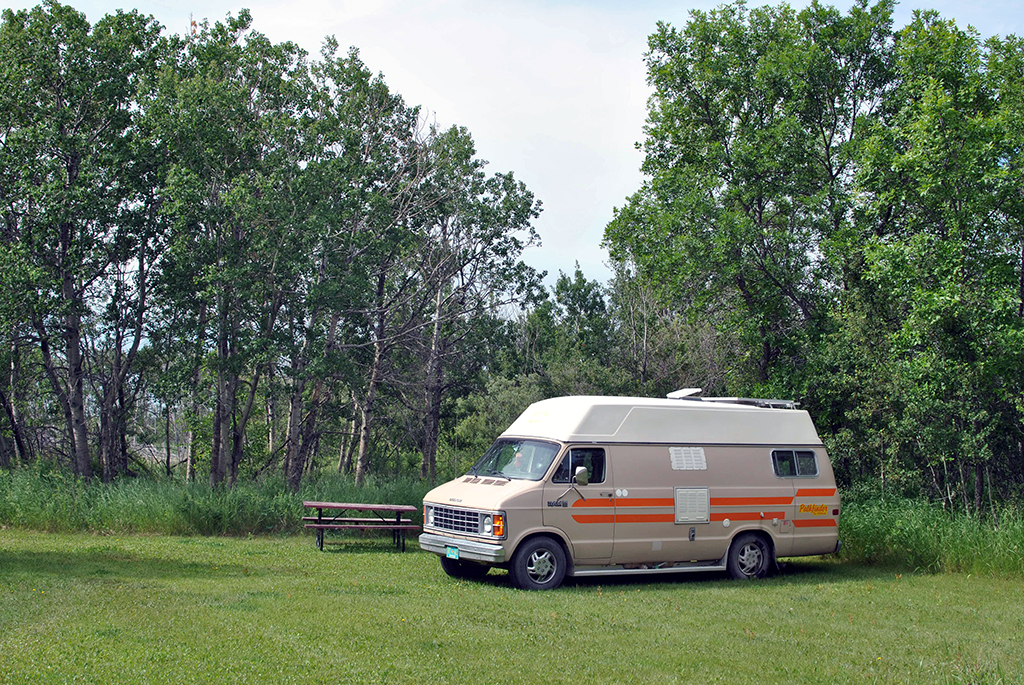 Again, how is this a rest area?!

For our last day in S-K, we were really looking forward to spending the day at Good Spirit Lake Provincial Park on what Maclean’s Magazine calls one of Canada’s best beaches (feel like I need a citation there but the article is no longer up on their website) but mother nature changed our plans by pissing rain so we headed into Yorkton and had a boring work day courtesy of A&W wifi instead. All in all, we had a nice time in Saskatchewan even though it didn’t end up being the Magellan-like experience we had ambitiously anticipated. On our venture back west, we’ll take the Highway 1 across and spend some time exploring the underground tunnels in Moose Jaw as we cruise along with endless trains filled with potash.