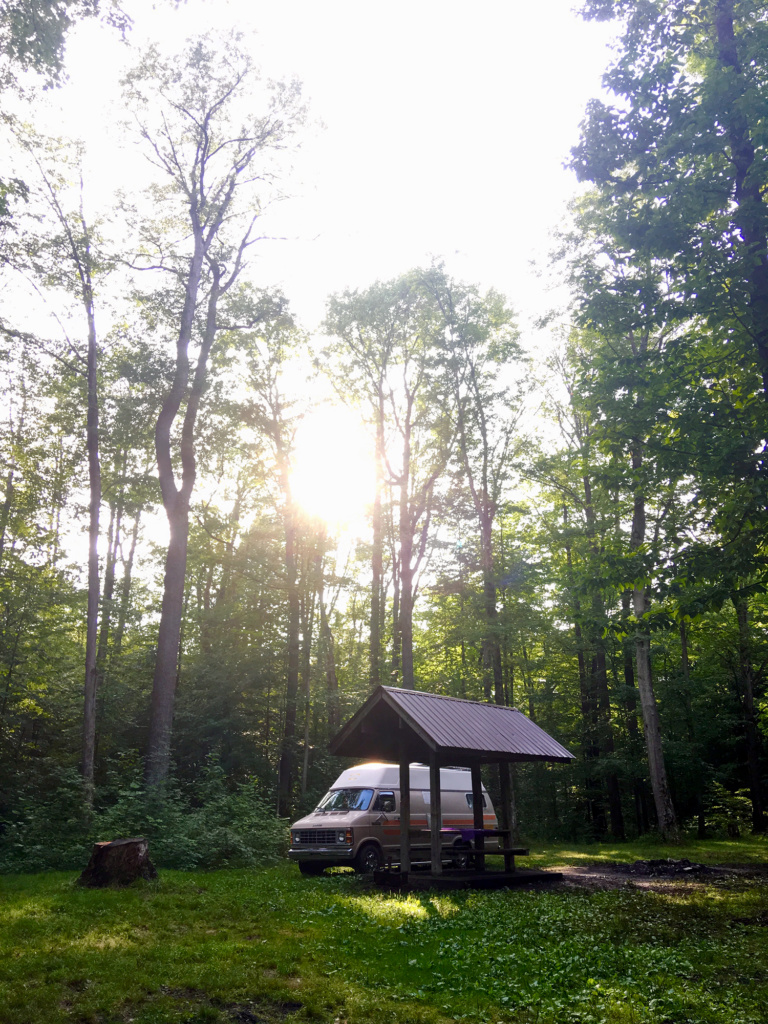 Hugging the Great Lakes while battling traffic in Chicago, dodging semis in Indiana and lusting over “pond-pools” in Ohio before hitting the border in Buffalo, New York.

With the van pointed toward Toronto, it was time to boogey around the Great Lakes and knock a whole bunch of states off our list. Some might be wondering why we didn’t cross into Canada through Detroit and there are a few reasons; for starters, we had friends to visit in Niagara Falls, ON anyway so crossing through Buffalo practically had us at their doorstep. Second, we wanted to keep as much of the route to Toronto on American soil as possible because gas is a fraction of the cost ($2.95 a gallon in Buffalo versus $1.30 a litre in London) and of course, we wanted to boost up the tally of states we’ve driven through – duh!

From Milwaukee in the early afternoon, we thought we’d be in the clear for getting through Chicago while avoiding rush hour traffic. Ah, how naïve of us. Because there’s no bypass highway around Chicago, everyone and their brother is crossing through the city. Now, we usually don’t complain much about not having A/C since driving with the windows down makes a pretty decent breeze, but being late July when the temperatures are soaring, the breeze is largely dependent on one thing: you need to actually be moving. Let’s just say that bumper-to-bumper traffic in 30°C/90°F made for a pretty sticky ride. We had no intentions of stopping in Chicago to explore at all, but we got a nice, slow-moving tour without even having to leave our van! I’ve heard a lot of people liken Toronto to Chicago and we could definitely see why – heck, their bridges must have been designed by the same buffoon who was responsible for Toronto’s crumbling Gardiner Expressway (and another reference from 2012 to illustrate how long this has been going on, just ‘cuz). One thing we noticed was that gas stations in Illinois offer a healthy discount on your fill-up if you get a car wash and man, are these Illinoisans (apparently the proper demonym) taking advantage of that because everyone was rocking a super shiny car. If only we could fit in a touchless car wash… 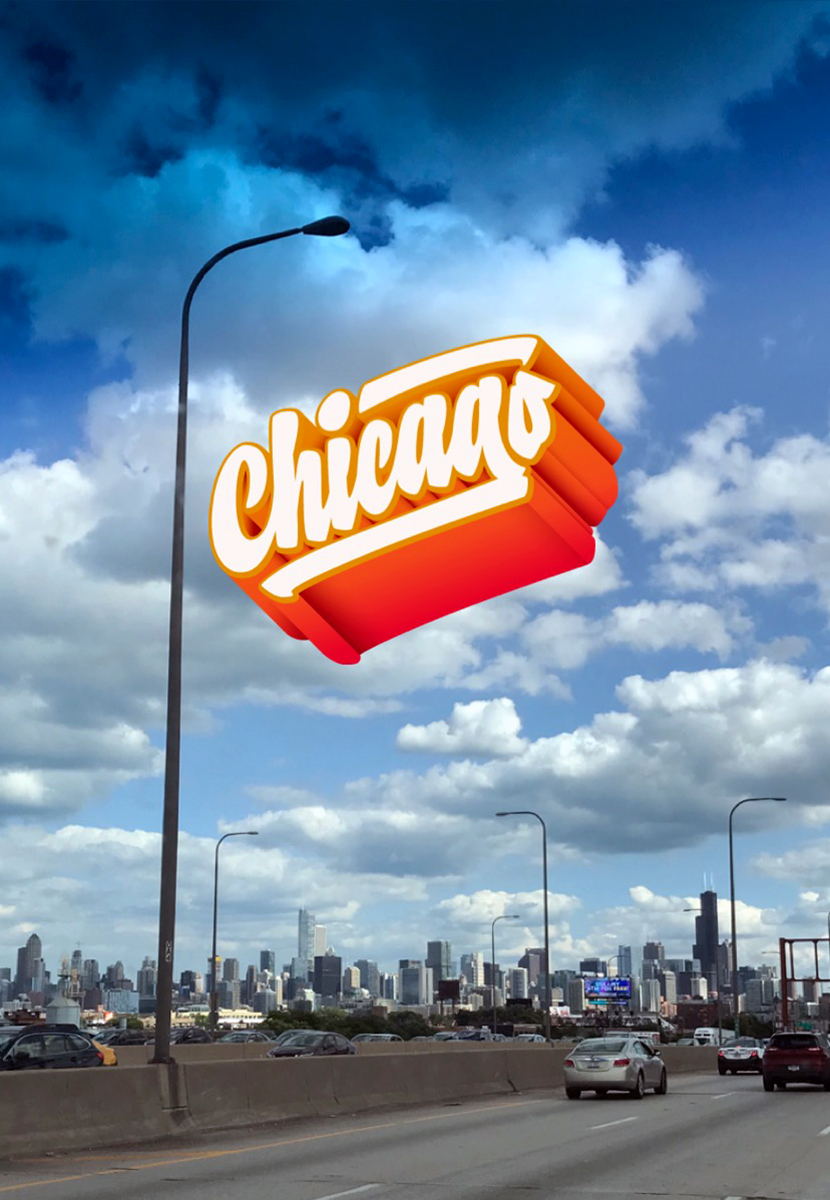 Taken during a brief moment when traffic was actually moving

Once we finally inched our way through the city, we had another moment of naïveté thinking that traffic would now ease up. Little did we know that Indiana is the so-called “Crossroads of America” and it was no joke. Thousands of semis coming from all directions on top of the regular 5PM hustle and bustle we were now right in the thick of. Thankfully things thinned out after the turn-off to Indianapolis and we could breathe again. We cruised into Michigan and touched base at the only Great Lake that neither of us had been to. We squeezed in some shut-eye at a Walmart after a very long day of driving and headed for Ohio the next morning. After clocking in a work day in Toledo – which I might add sounds way too Wild West-y to be in Ohio – we stayed the night at the Harry Hughes Equestrian Centre and relished in the quiet sounds of birds and crickets that made us thankful to not be at another Walmart. 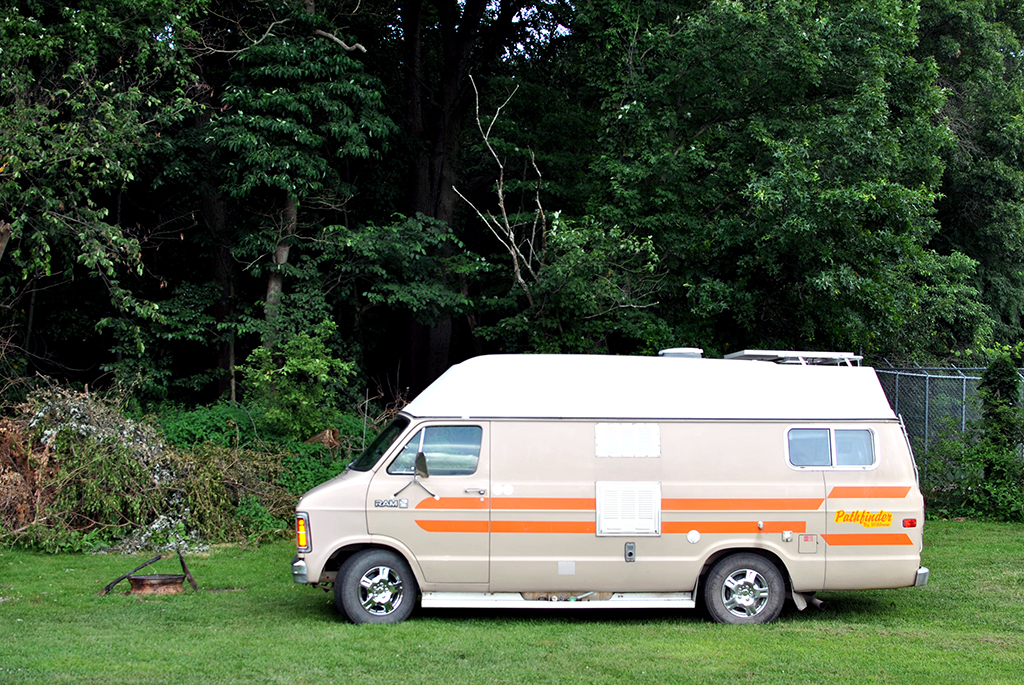 The traffic around Cleveland was practically non-existent, which was refreshing after our drive the day before. As we went through smaller towns and residential areas, we noticed that lots of people in Ohio have these little pond-meets-swimming-pool things that are totally genius. They look like ponds with rocks and gradual depth but they’re filled with vibrant teal waters and some even have diving boards or floating docks, making me question if they’re chlorinated? Plus they’d seemingly easily freeze over in the winter and double as skating rinks. Please shed some light if you know more about these things and if our hypotheses are correct, then tell us why no one else in North America has these?!

Not my photo but these are what the “pond-pools” look like. Seemingly fantastic but we need to know more!

We made the very brief voyage through Pennsylvania before heading into the last state on our route, New York. New York marked the 28th state that we’ve visited on this road trip with Clementine and that was pretty cool. We can easily knock off a bunch of east coast states next summer and hopefully eventually hit all 50 (maybe a little ambitious about Hawaii but one can dream). We stayed in the North Harmony State Forest, which unbeknownst to us, was in the heart of Amish-ville. We often feel old school driving a 30+ year old vehicle among shiny white Sprinters but instantly felt pretty damn modern when a family went by in a horse and buggy. 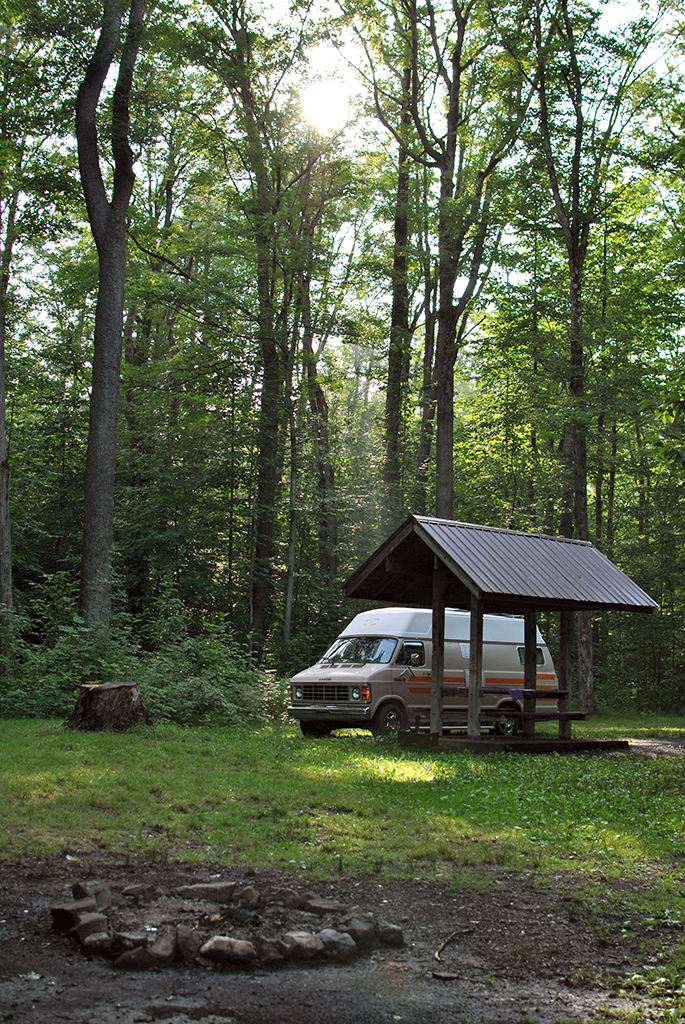 Who owns that cutting edge ultra modern camper van over there?!

After packing up and heading to Buffalo, we were on our way back to Canada once again and ready to pay a visit to Toronto, where we lived before starting our van journey, and my (Olivia) hometown. As we mentioned before, returning to Calgary felt like we were coming full circle after driving almost 50 000 kms in three countries but coming back to Toronto was completing an even bigger circle. America was very, very good to us and we’re bummed that we only get six months a year to explore it but as always, we were super stoked to be home.