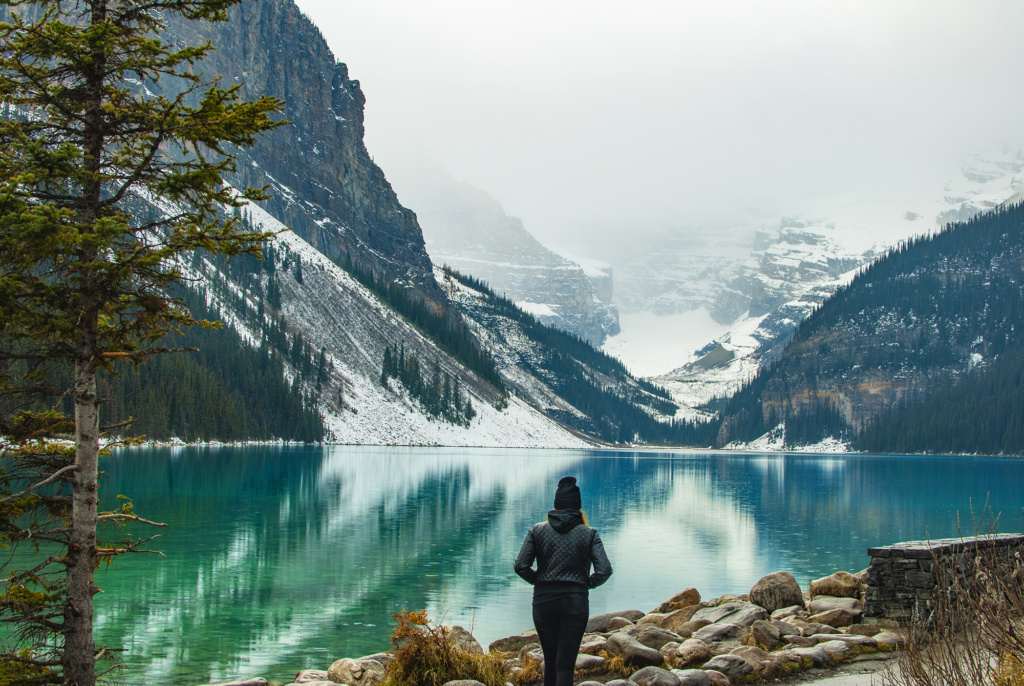 11 NovFrom a Breakdown in Brandon to the Mountains in Banff

Nothing like breaking down on the side of the highway at night when it’s freezing out. We had a minor setback in Brandon before zooming through the prairies to reach Calgary and lust over the mountains in Banff and Canmore, Alberta.

Where did we leave off? Oh right, we were on a mission to drive through the prairies as quickly as possible. Leaving Thunder Bay that morning and making a few stops along the way, we were making great progress by reaching Brandon by nightfall…that is, until we started smelling burning rubber and saw smoke coming from under the hood. Fun! Truthfully, we haven’t had a breakdown in quite some time so we weren’t all that surprised. Naturally it was below 0 temperatures and the wind was violent when we had to pull over along the Trans Canada and check out the situation. It seemed that one of our belts had snapped, which was shitty news since we had just replaced them not long ago. Thanks to my dad’s suggestion, we kept our old belts just in case and thought we’d be in the clear by swapping the broken one out with our old one. Nope. After several attempts to get the tension right, we realized that the unit it was wrapping around was ceased and was just continuing to smoulder and smell gross. The question now wasn’t as much about how we were going to replace this part as it was about identifying what the part even was. With no help from CAA (we’re mad at you, CAA), a kind stranger pulled over on the side of the highway asking if we were alright and offered to tow us to a nearby gas station. That’s one great thing about being in the prairies – people are super nice and everyone has a truck. Long story short, it was an air pump (or smog pump), which is a part added in these older vehicles to help reduce emissions but virtually does nothing by today’s standards. In knowing that leaving the belt off would do nothing but increase our horsepower, we threw the broken belt in the trash can and got back on the road. 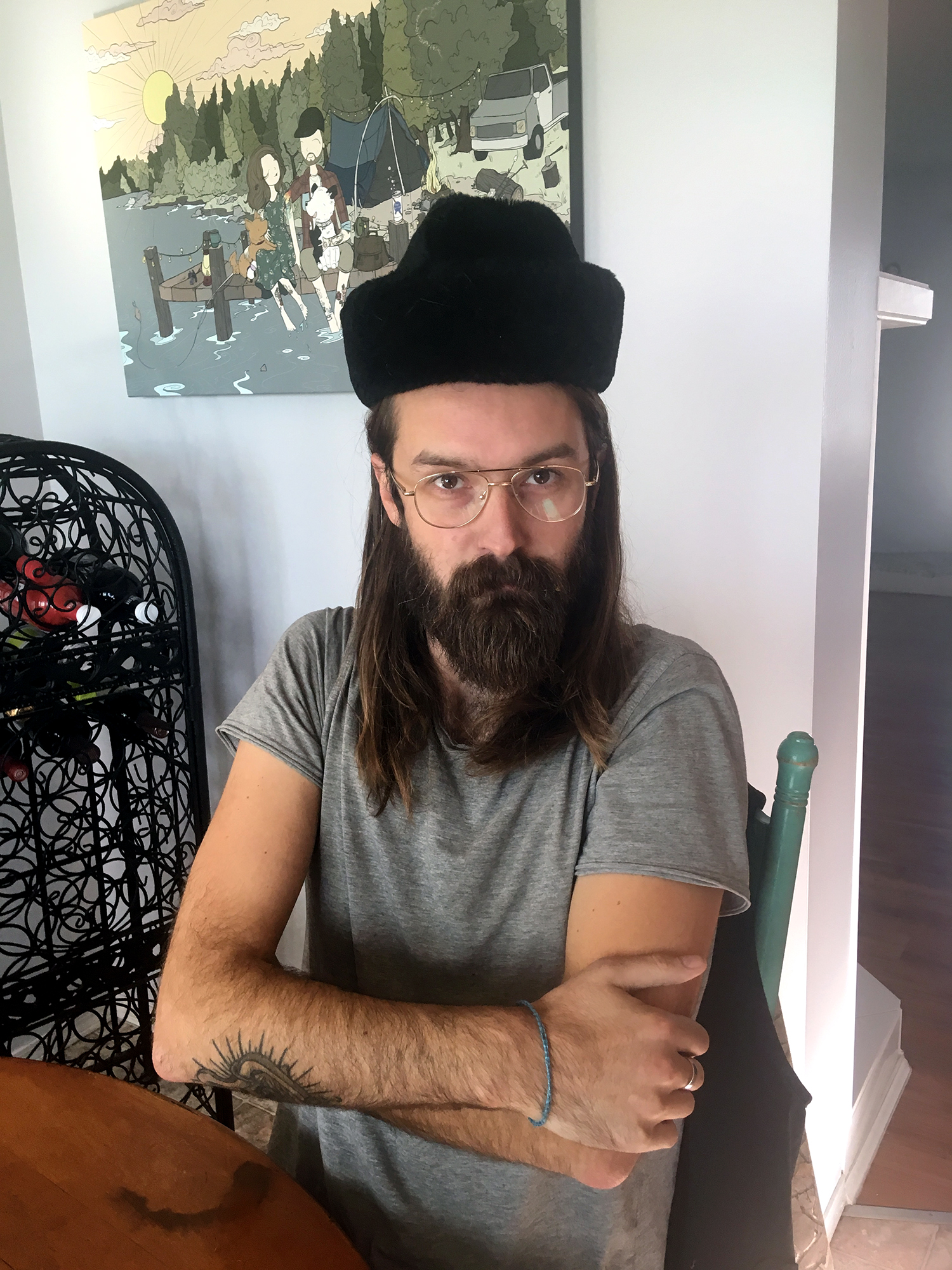 We had a nice rest area scoped out in Broadview, Saskatchewan but once we arrived well after midnight, the gate was locked and we felt a second hit of dejection. Our bodies were also very confused after driving through two time zones in one day (Sask doesn’t observe Daylight Savings Time) so we pulled into a nearby truck stop and hunkered down for the night to prepare for another long day of driving to follow. After a surprisingly quiet sleep, we got back on the highway and jetted through Regina, Swift Current and Medicine Hat before finally making it to Calgary and getting a chance to slow down for a few days and hangout with friends and family. Making the two long days of driving worth it was getting to meet Justin’s mom’s two new kittens that could put a smile even on Ebenezer Scrooge’s face. 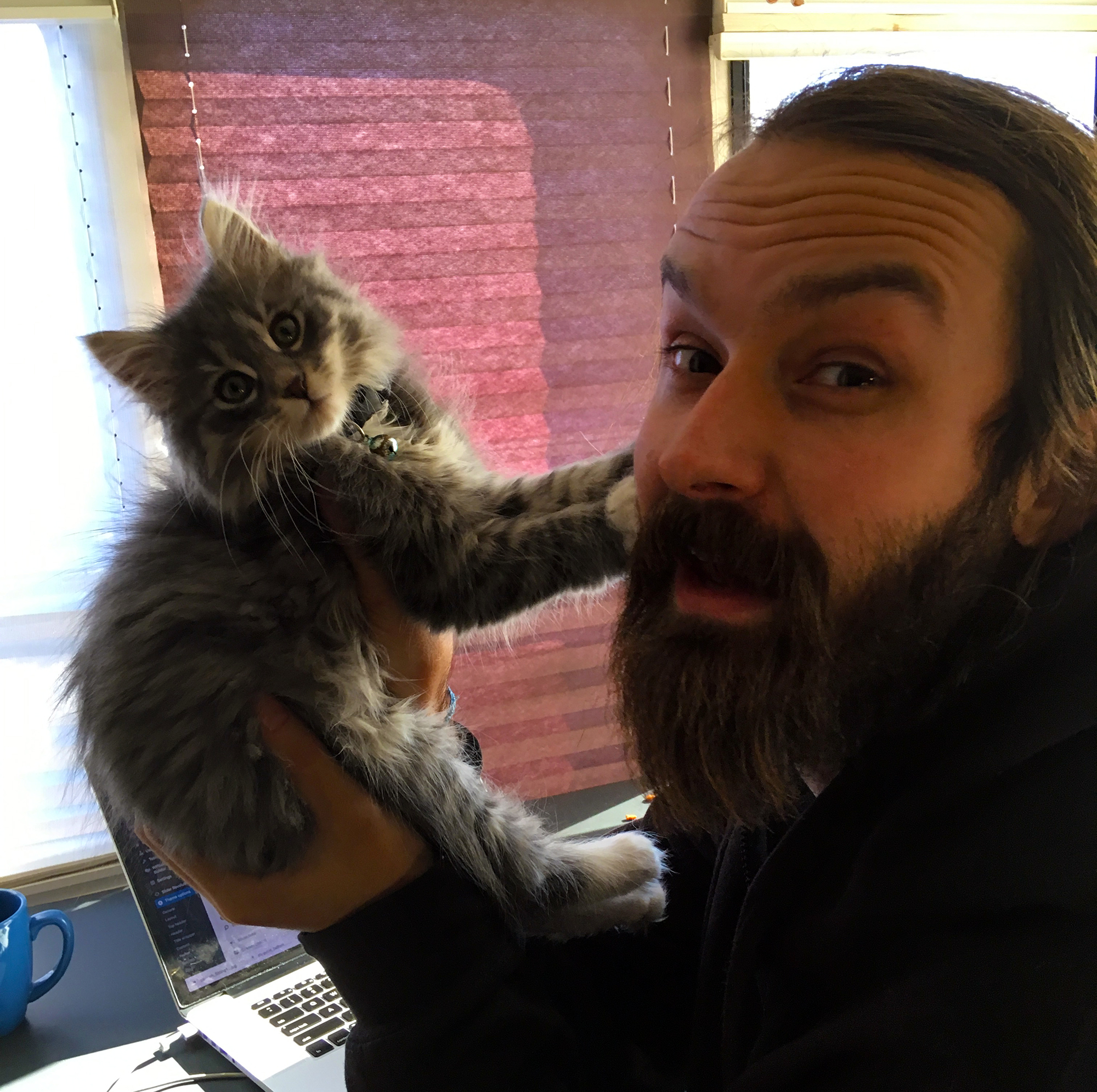 With some major stroke of luck, we had clear skies and warm, sunny days the whole time we were in Calgary, sitting comfortable in double digit temperatures for over a week. As anyone who lives in their vehicle knows, that makes life much more pleasant for sleeping and pretty much just being alive in general. Even with the warm days, we were so bogged down with a huge workload that we spent most of our time behind our computer screens. We did, however, get to spend plenty of time with Justin’s brother’s puppy who doesn’t look like much of a puppy anymore but is still just as wild. Is it showing that I have major pet fever? 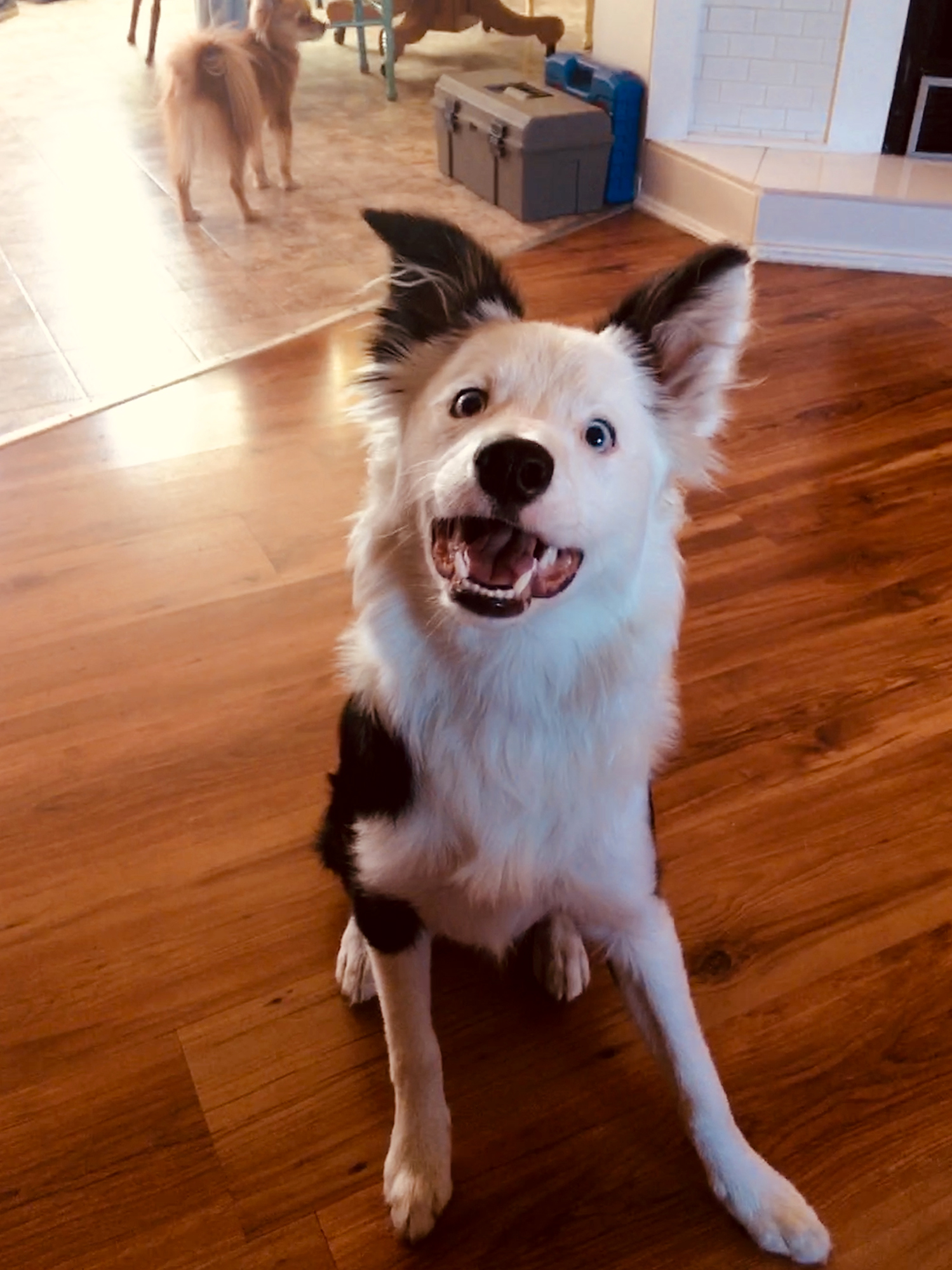 Grown up Banjo, one of our favourite buds

With so much time spent working, we took an overnight trip to Banff National Park to give ourselves a mini vacation and recharge a bit. If you’ve ever seen a postcard of Canada, it was probably taken in Banff. It’s Canada’s first National Park and is absolutely gorgeous from every direction. No doubt the Rockies are pretty epic the whole way down, but there’s something special about Banff. We started by driving through the foothills to Kananaskis Country and making Lake Louise our first stop. We’ve both been to Banff before but never at this time of year; October is shoulder season and is known to be the quietest month of the year. This was great news for us because the volume of tourists can often get a little out of hand when you have to time every photo just right in order to not get someone else’s family in the background. 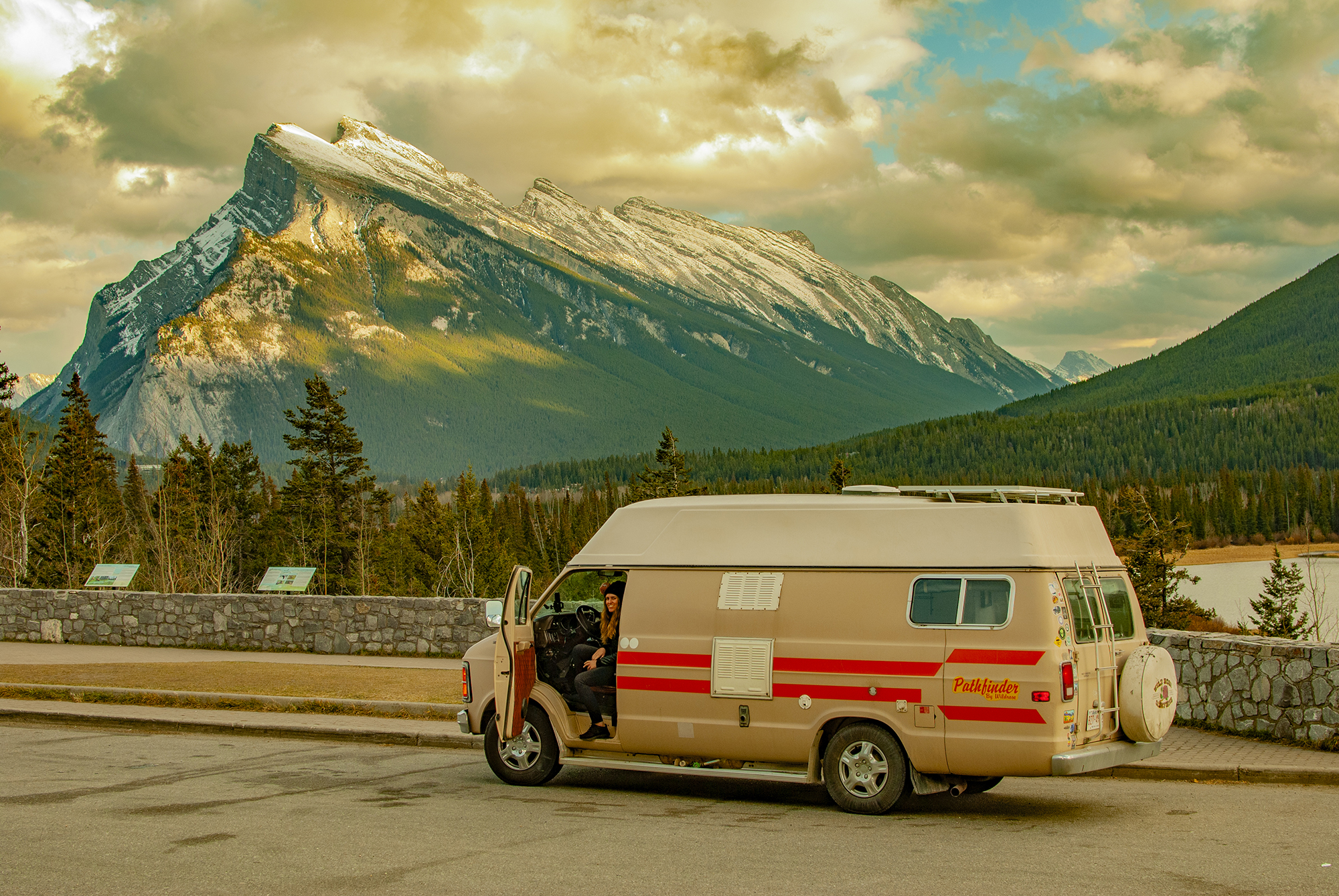 Unfortunately the weather was a little overcast and grey but Lake Louise still glimmered with its vibrant blue-green waters. The canoes and kayaks had been put away for the season and were replaced by a bit more than a dusting of snow on the mountains and surrounding grounds. Despite the cooler temperatures and not-so-sunny skies, there were still bare shouldered brides and busloads of foreigners all checking out the Albertan staple. Moraine Lake, another photoshop-looking mountain lake, is usually the next stop but access was sadly already closed for the season. 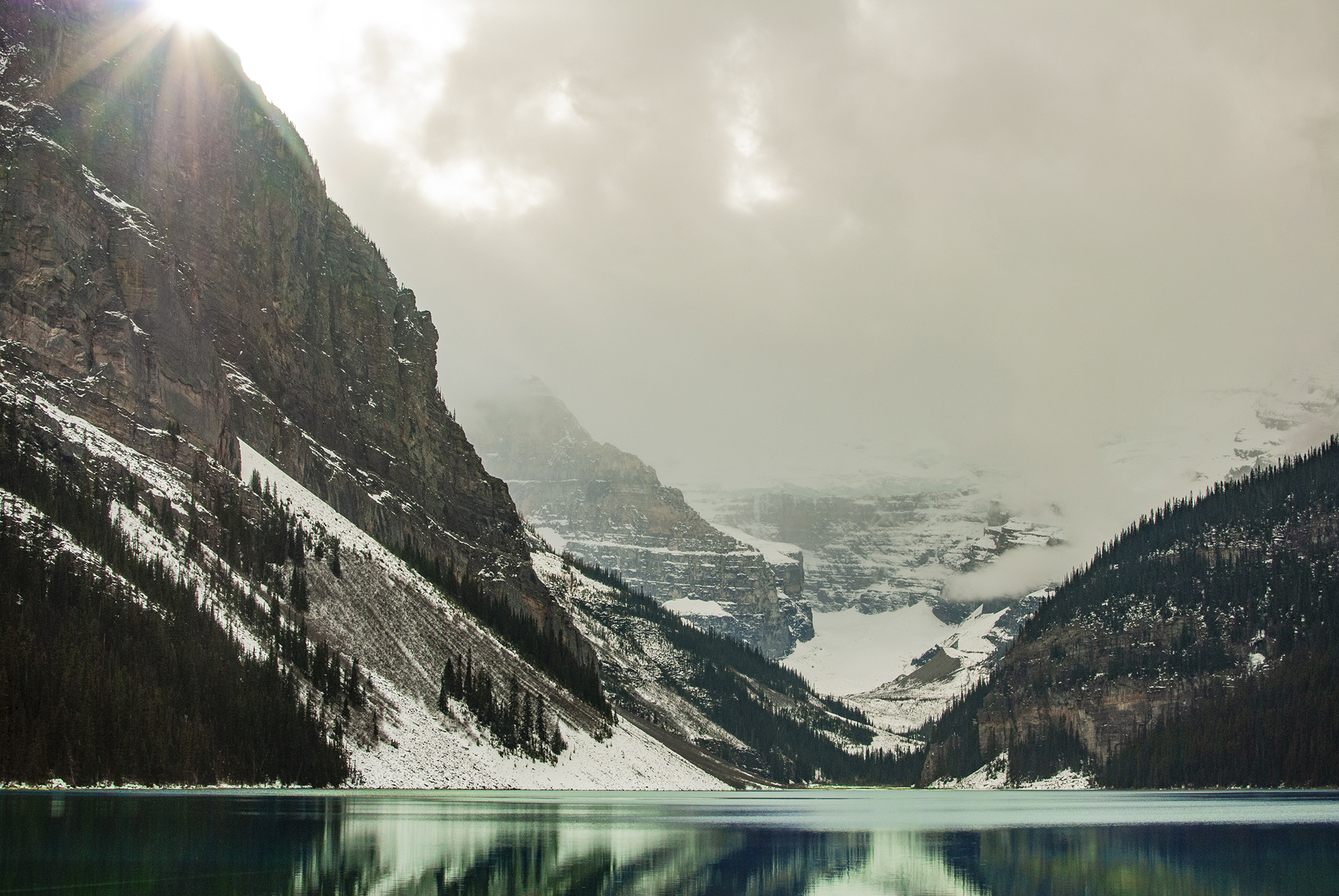 Lake Louise looks too beautiful to be real

On a whim, we decided to go on the Banff Gondola since there’s a special rate for Alberta residents (who can turn down a deal?) and we figured it’d be one of the only times where we’d actually get our own cable car and not have to wait in line. As cheap as I am (I prefer economical), this was worth paying full price for. The ride up Sulphur Mountain gave us an awesome view of the mountains but the view from the top was kind of mind blowing. There’s a fairly big building where you get off the gondola with a gift shop and restaurant and all that jazz, and the start of a 2 km (1.24 mi) walking trail – which is pretty much ALL stairs – that takes you to the Sanson’s Peak. At the summit of the mountain, you have an incredible panoramic view of the entire park and the town of Banff nestled amongst the towering peaks. 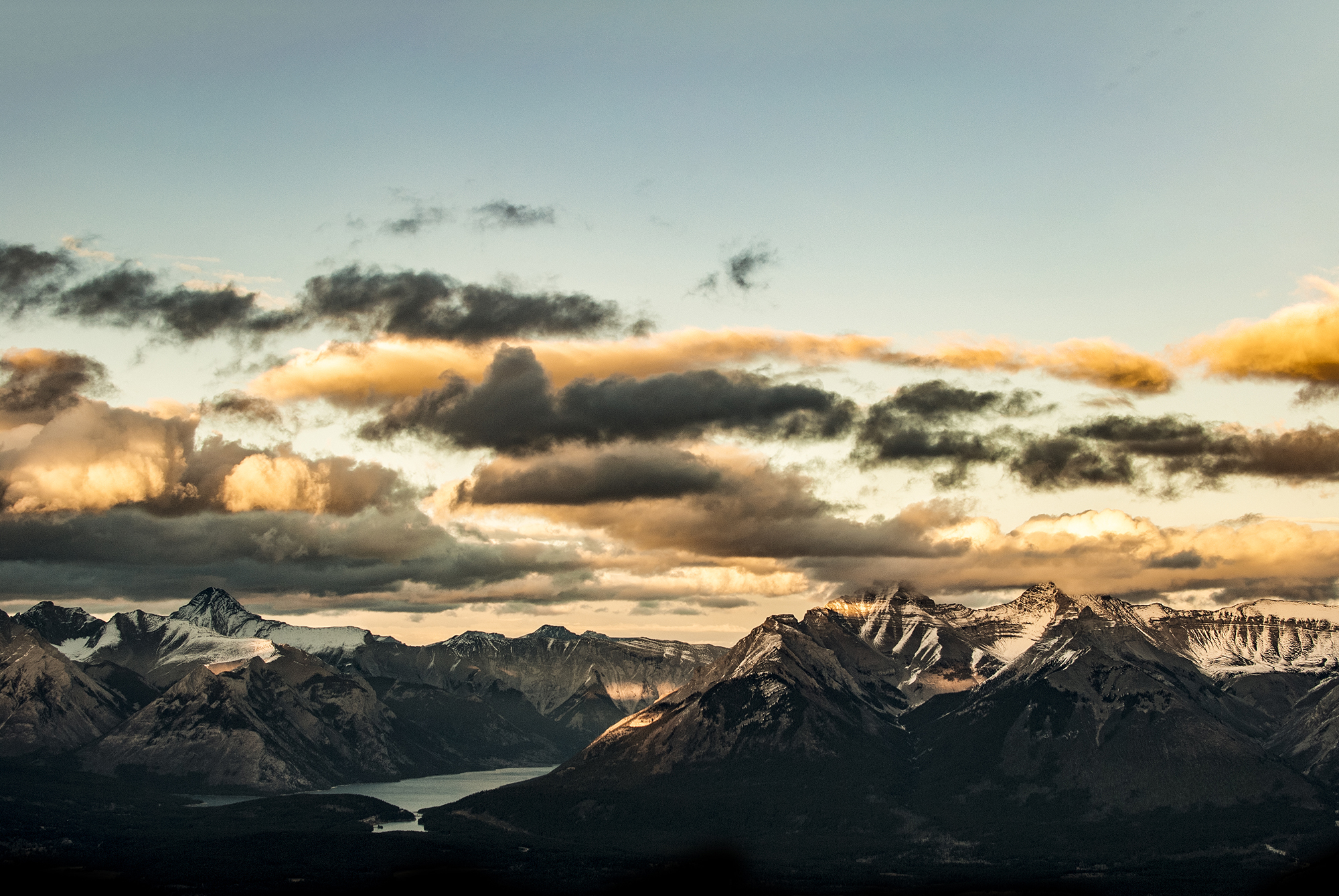 Amazing view of the mountains from Sanson’s Peak 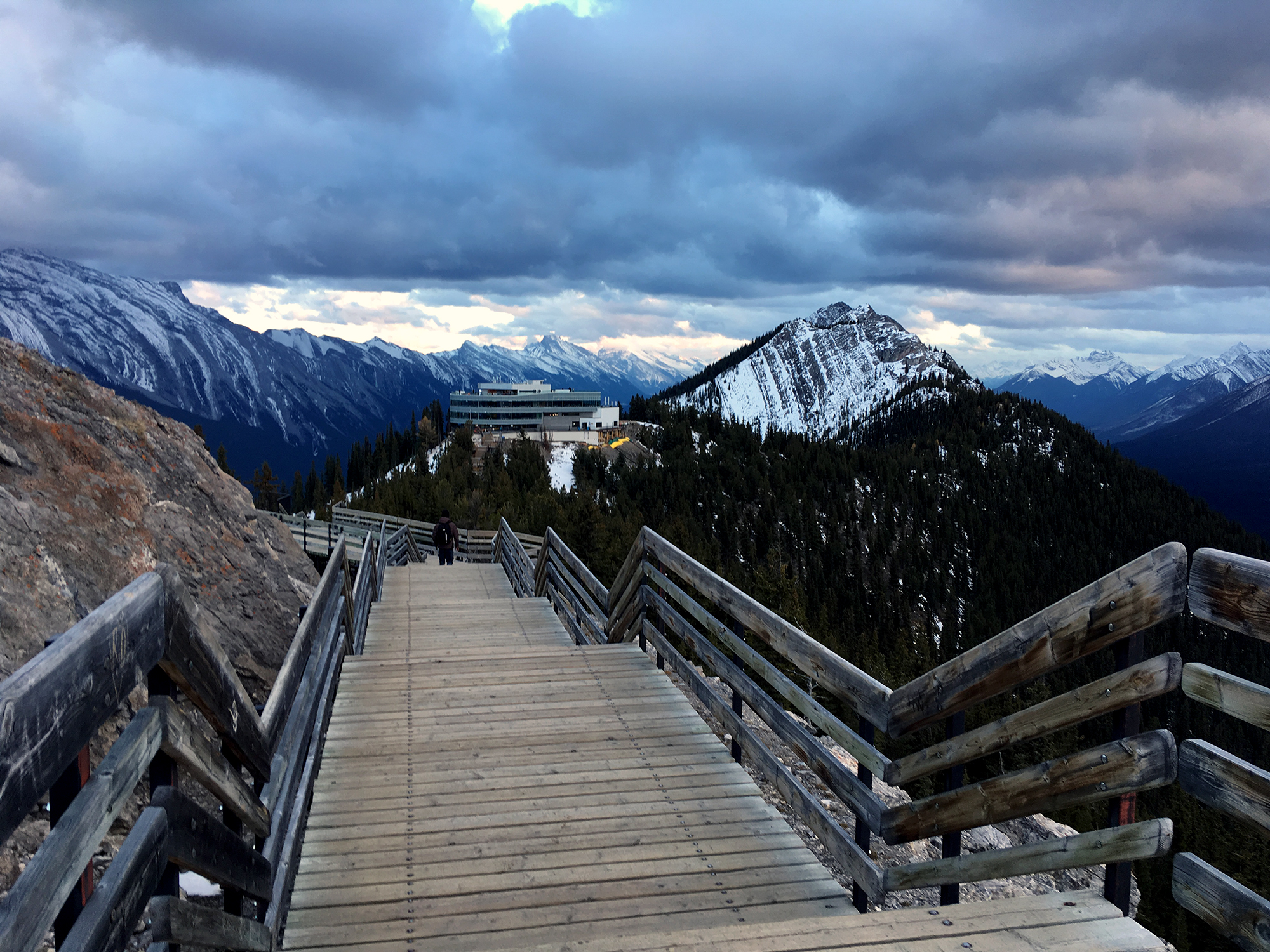 With the quick change in elevation, things got majorly cold so we were happy to return to ground level and find some good food after working up quite an appetite. Another praise to shoulder season, we were able to find free parking downtown where we could stroll around Banff Ave and the other animal-named streets without having to shimmy through hoards of tourists. We had some pretty tasty BBQ and cocktails at Park Distillery and left downtown with full bellies and lighter wallets. We headed into Canmore for the night, which is the neighbouring town outside of the National Park boundaries where a lot of people who work in Banff live (which, I might add, is like 95% Australians). We parked in a designated RV parking zone in downtown Canmore that was clearly a very popular spot for travellers and vehicle dwellers alike. We had the best time in Banff and lucked out being able to end the night within walking distance of a bar for a nightcap (or two…). 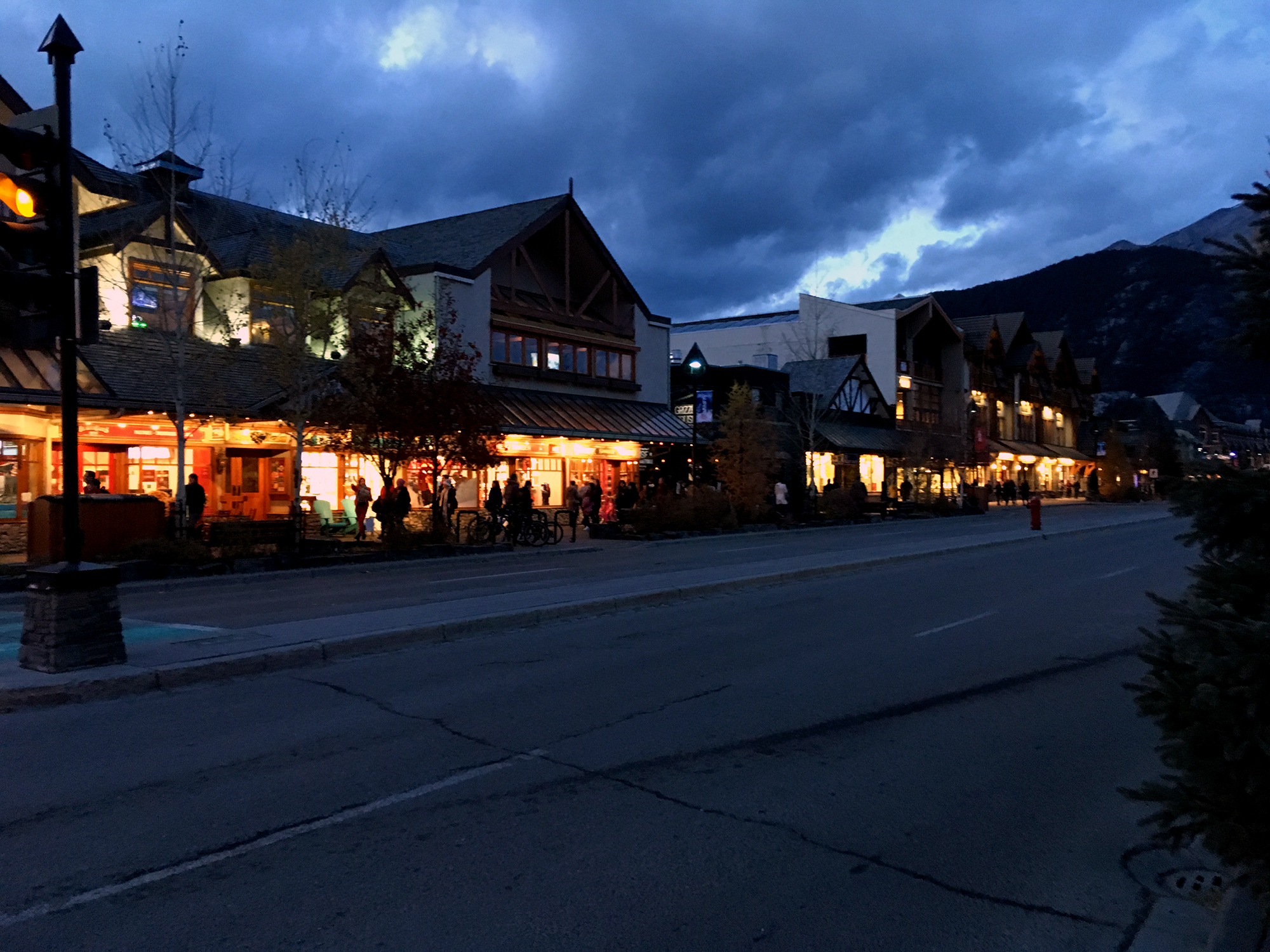 A rare sight…downtown Banff not swarmed with tourists! 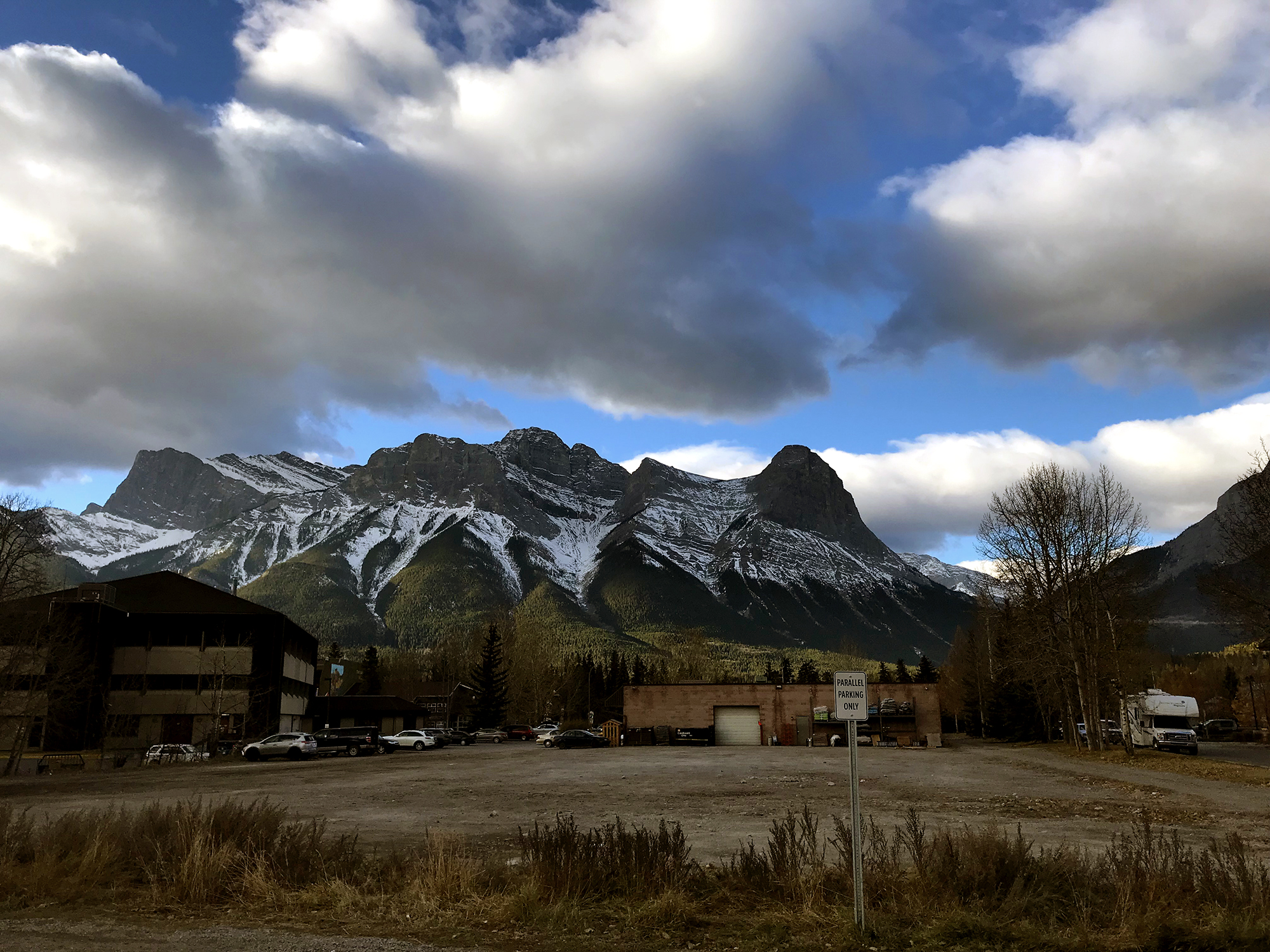 Not a bad view to wake up to in downtown Canmore

On our way back to Calgary, we stopped at Elbow Falls in Kananaskis and marvelled at how low the water levels were. Normally a pretty majestic waterfall, there was still a solid stream going but it was surrounded by dried up riverbeds that you could walk right on to. Sadly, they say the area really hasn’t been the same after the 2013 flood but in any case, it still is pretty. 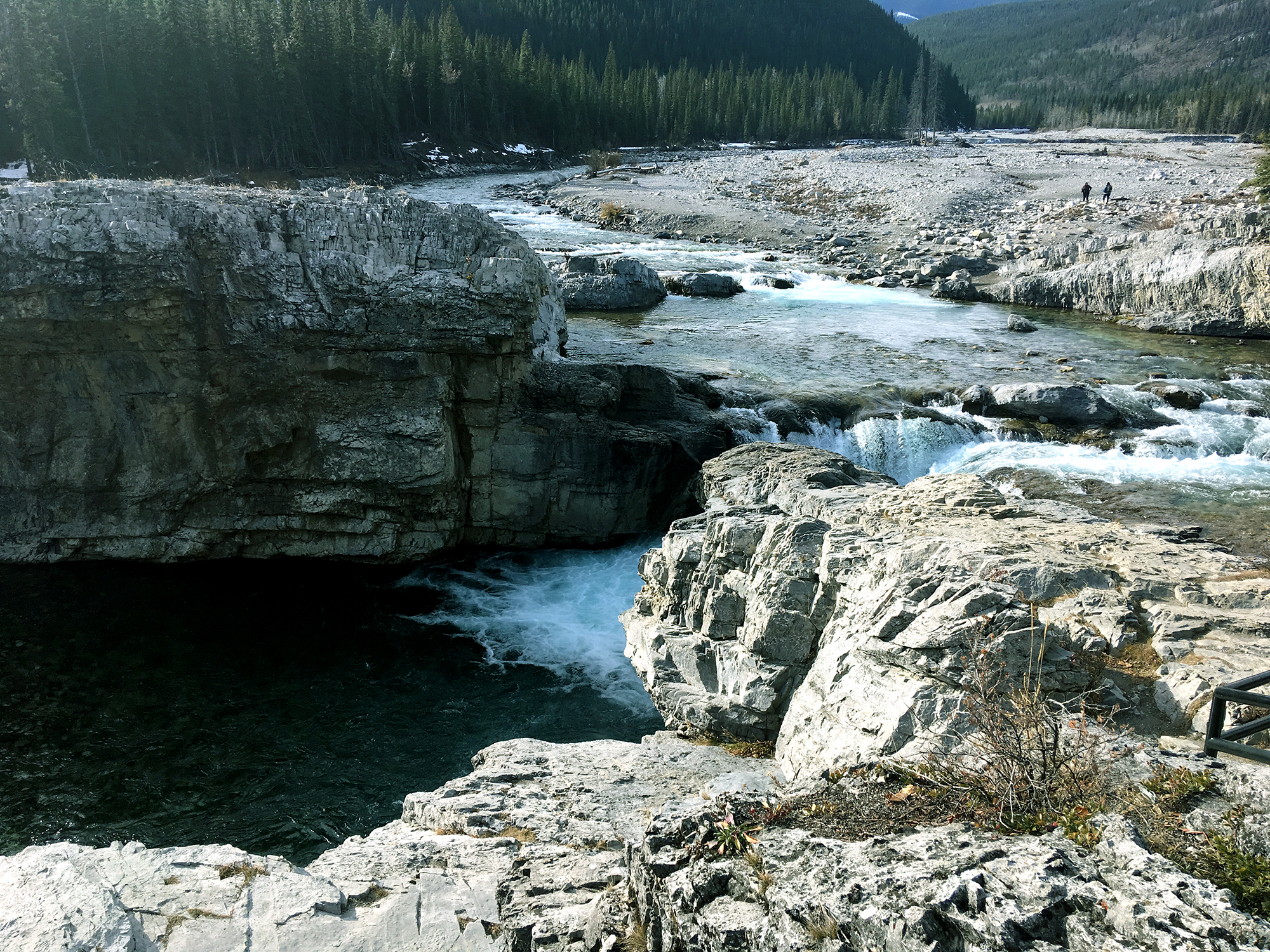 Keeping our eyes on the forecast, we spent our last couple days in Alberta starting our winter prep for the van. We bought a roll of Reflectix and made insulating panels for all the windows and sealed off any gaps. We tied up some more loose ends repair-wise and very reluctantly, traded in our cassette player (it was hardly working) for a newfangled stereo. Clementine is slowly making her way into the 21st century but still boasts plenty of 80s charm. Snow was on the ground when we left Calgary so we knew it was time to move and hopefully get as much of our mountain driving done before the weather starts to turn in BC. We had our fair share of cold weather last year in Alberta but escaped it by going south; this year, we’re staying in Canada and hoping to do everything we can to comfortably winterize. Stay tuned for a blog about winterizing tips for vanlifers – you’ll never cherish wool socks so much. 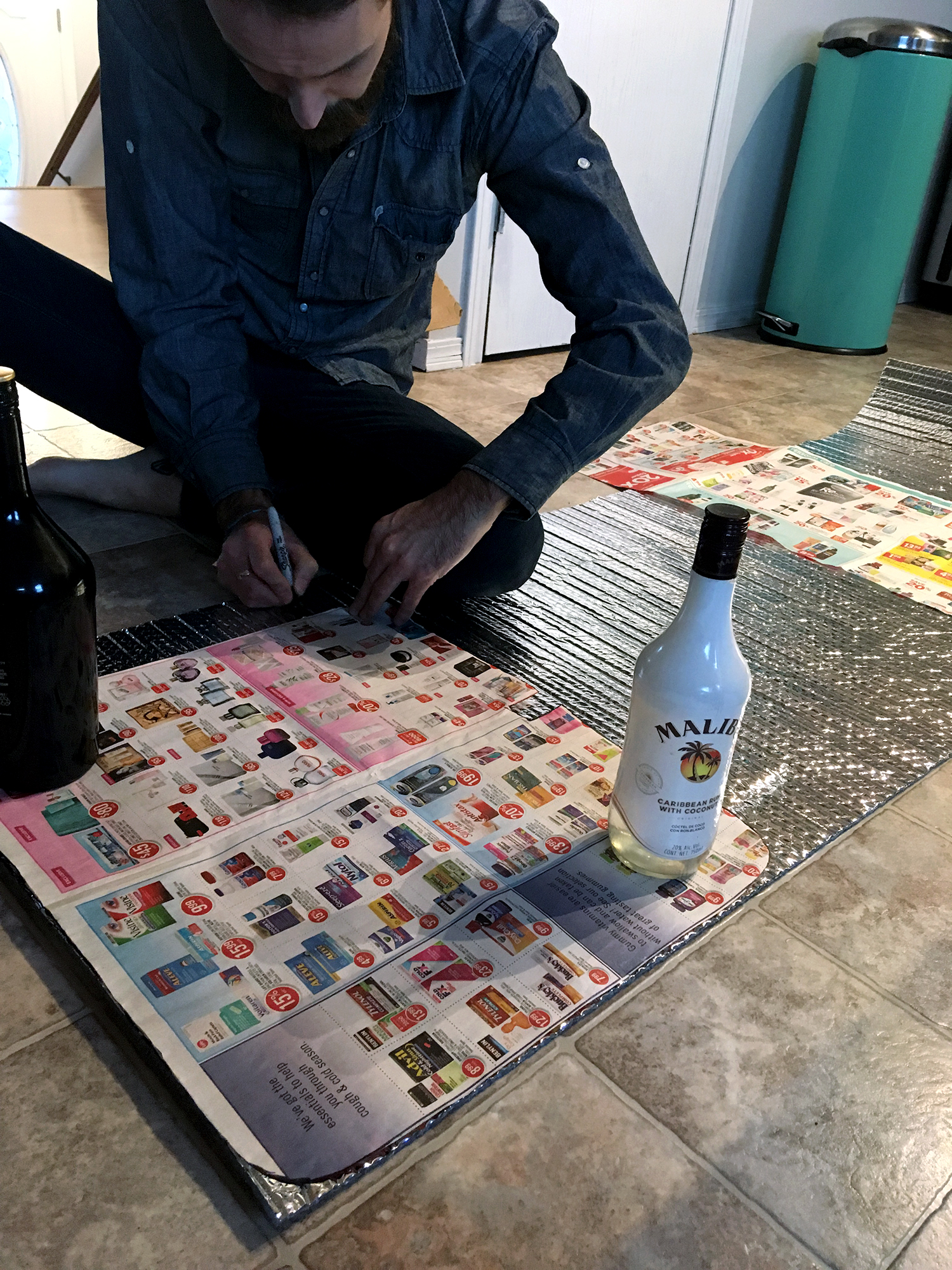