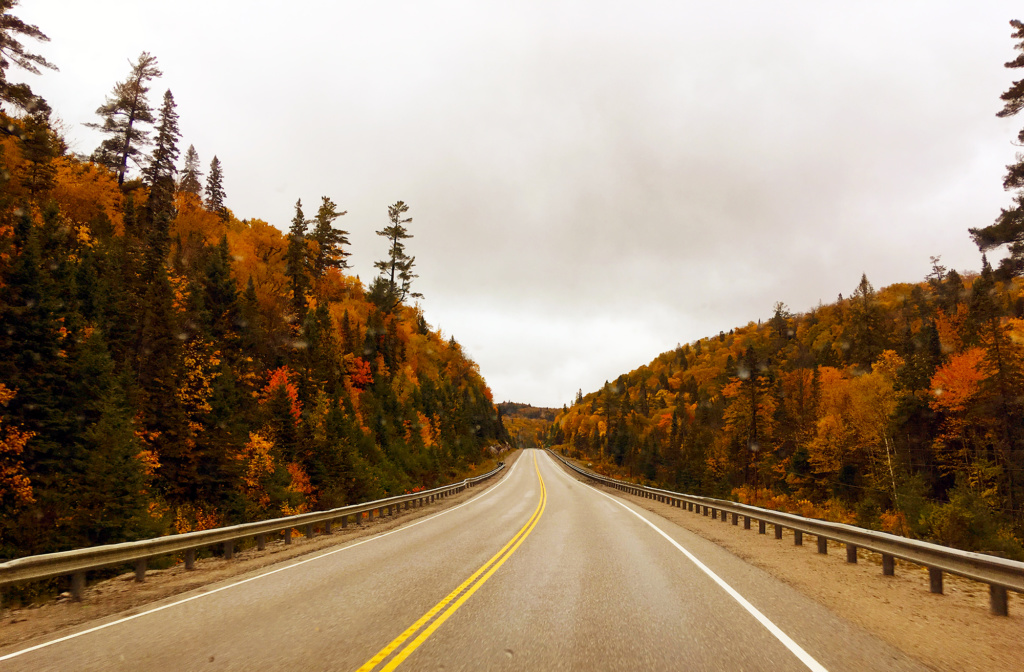 Going through all 4 seasons in a matter of days in Toronto, Sudbury, Manitoulin Island and Kakabeka Falls, Ontario.

After leaving the East Coast, we blasted through Québec making only one overnight stop in beautiful Yamachiche in order to spend Thanksgiving with family in Toronto. Lucky for us, the soundtrack of the Kavanaugh hearings made our drive go by pretty fast since it sounded like we were listening to a (very long) scene in a movie. By the time we got into eastern Ontario, we were noticing that the leaves were slowly starting to change colour and that as soon as the temperatures started to dip, autumn would be in full swing. In other news, coming as music to the ears of Canadian vanlifers everywhere, Planet Fitness has started to expand its presence in the country and is making a nice dent into Southern Ontario. We grabbed our routine shower (and a work out too, I guess) at the new PF in Kingston and headed to the Lennox & Addington Dark Sky Viewing Area for the night. As our luck would have it, the clouds began to get really dark and heavy on our way there and it ended up rainy and overcast for the rest of the night so we definitely got a good view of how dark the sky was, but sadly it was not lit up with stars. 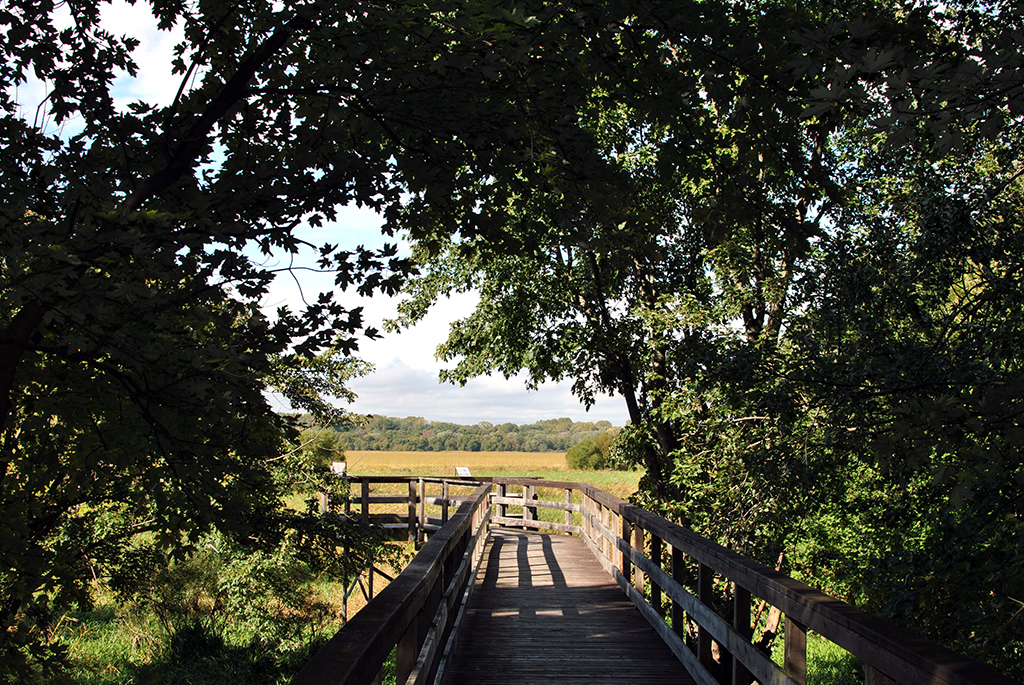 Pointe Yamachiche is a nice little nature reserve on the St. Lawrence River and is a prime bird watching spot

With another return visit to Toronto, we spent a week hanging out with friends and family and sleeping in inconspicuous alleyways around the city, as everyone does when they visit home. We were lucky enough to have multiple family Thanksgivings and an ever-popular Friendsgiving filled with tons of food, booze and good times. Not to brag, but we also got a beautiful new countertop that Justin’s uncle made for us with some extra plywood we had from the new table – upgrade! 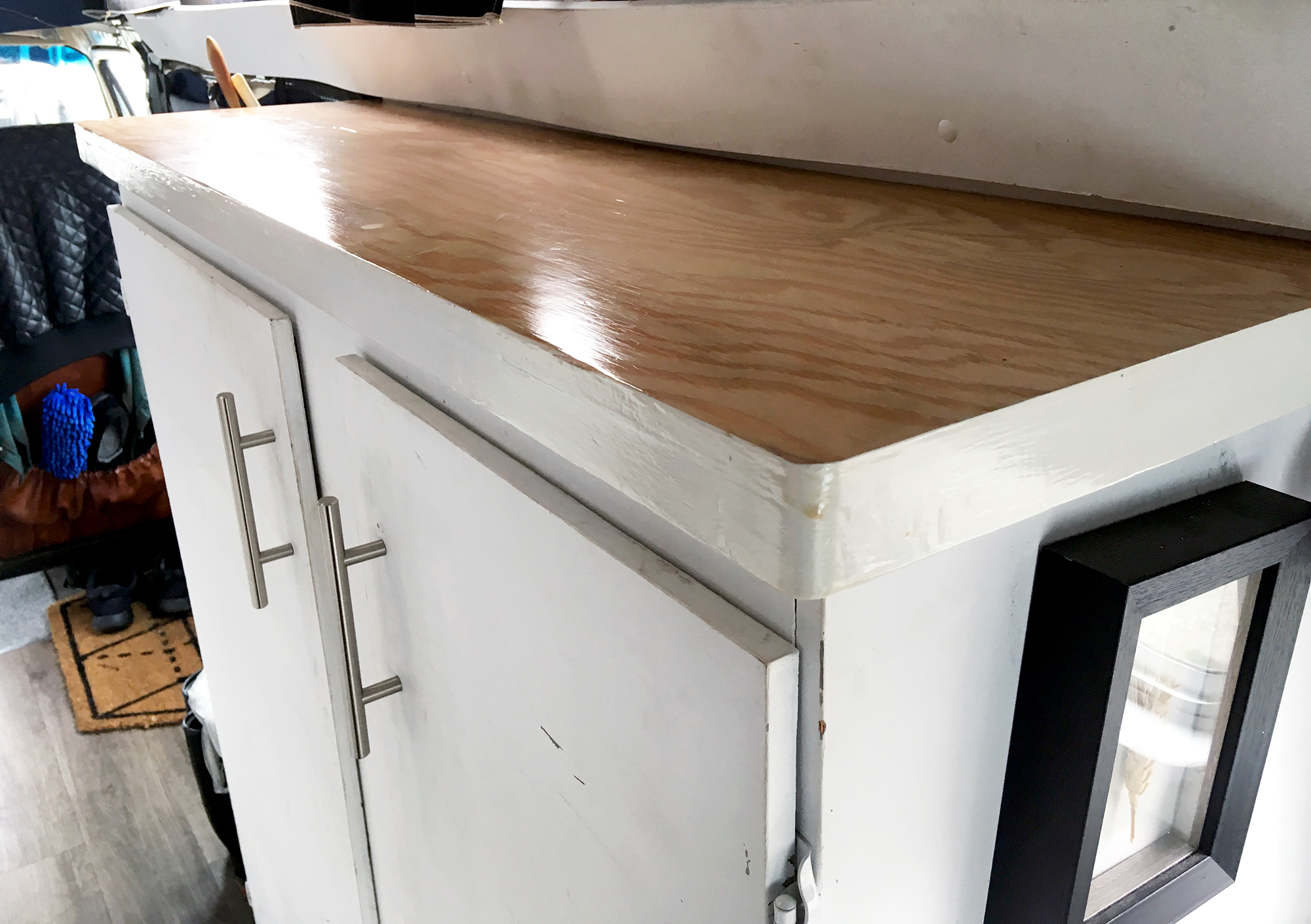 Our snazzy new countertop made from extra plywood

We had already experienced a taste of the cold to come while in Newfoundland and even in the evenings in Toronto but were not at all expecting the heat wave that was to come as we left. Picture this: it’s early October, Alberta has already had over a foot of snow, people are putting their winter tires on and Toronto reaches 27°C (81°F) for two days. What the?! As abnormal as it was, we tried to enjoy it while we could knowing that the north would be much colder. We hopped on the dreaded highway 400 and the temperatures started to dip as our km’s climbed. We boogied through toward Sudbury and stayed at a boat ramp near Killarney that was painted with reds, oranges and yellows. The craziest thing about fall is that it doesn’t last very long – the leaves change colour and if you don’t enjoy them right away then you’ll be stuck looking at them on the ground as soon as it gets cold. If you live in a place that doesn’t really experience autumn (say, the desert or in recent years, Calgary), then you should make it a point to travel somewhere that does to see the leaves at least once in your life. Northern Ontario is an awesome place to do it along with the eastern US. 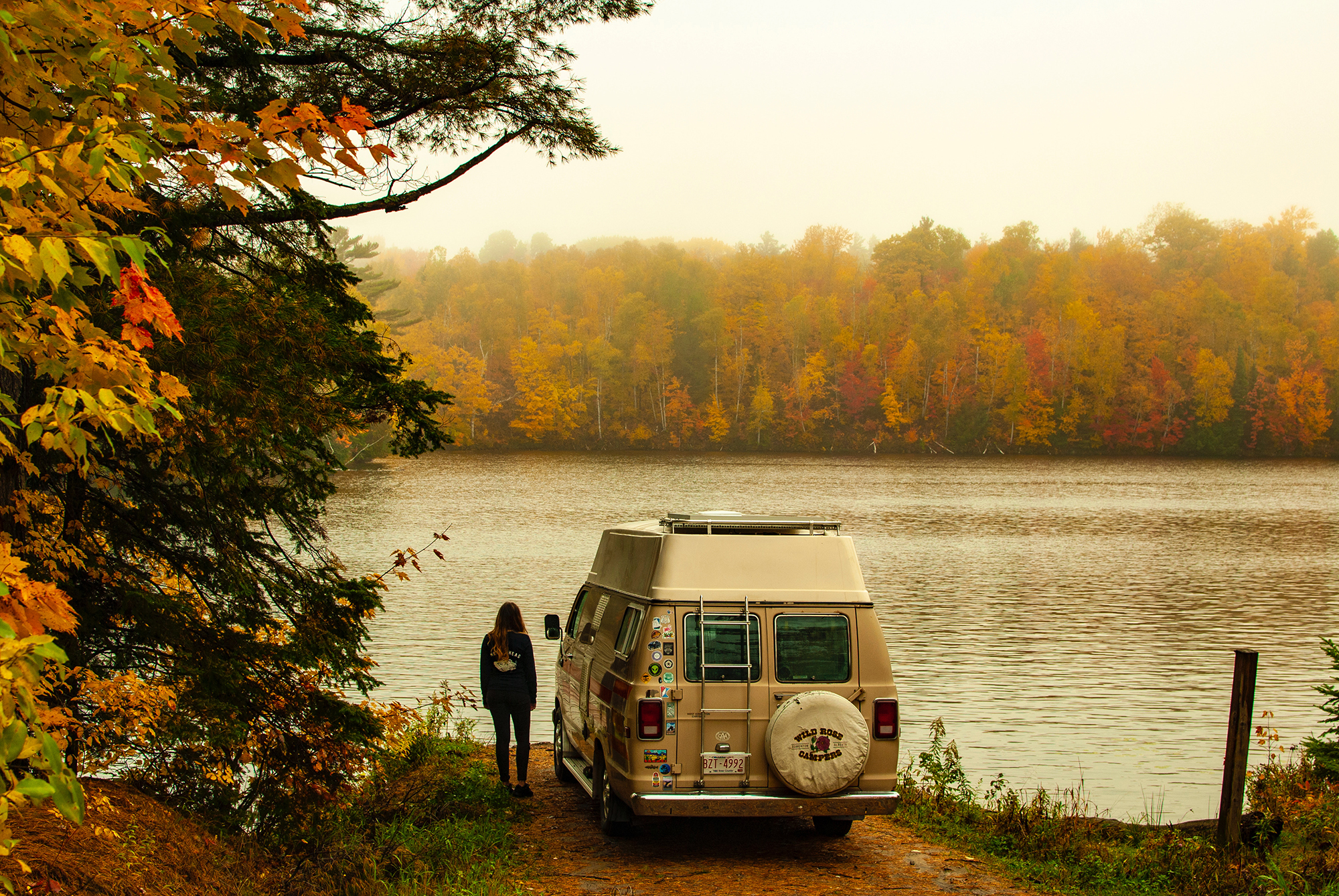 We arrived in the dark and woke up to beautiful fall leaves everywhere!

We made our necessary stops in Sudbury for an oil change and to see the Big Nickel and headed to somewhere I (Olivia) have always wanted to go: Manitoulin Island. Generally people from Southern Ontario take the ferry, The Chi-Cheemaun, from Tobermory to visit the island, but if you’re coming from the north, then you can drive right on from Espanola. I’m sure the boat would be amazing but driving required a lot less planning. Speaking of planning, although we rarely plan much, we definitely did not plan for our Sudbury errands to take as long as they did so we ended up on the island much later than we would have liked. Sadly the change in seasons always goes hand in hand with a much earlier night sky. Our main destination was to check out Bridal Veil Falls. We got there around 5PM and it was pissing rain and starting to get dark. Somewhat reluctantly, we parked the van and made our way down the steps when it seemed that the rain had started to let up and there was all but the calming sound of a roaring waterfall below us. When we made it to the bottom, we realized that something special was going on; the river was chock full of salmon swimming upstream to spawn. There was no one else there, the rain had stopped and a mob of big ol’ salmon were so close to us that we could touch them. We were even able to walk behind the falls and watch the salmon attempt to jump up them. Magical! 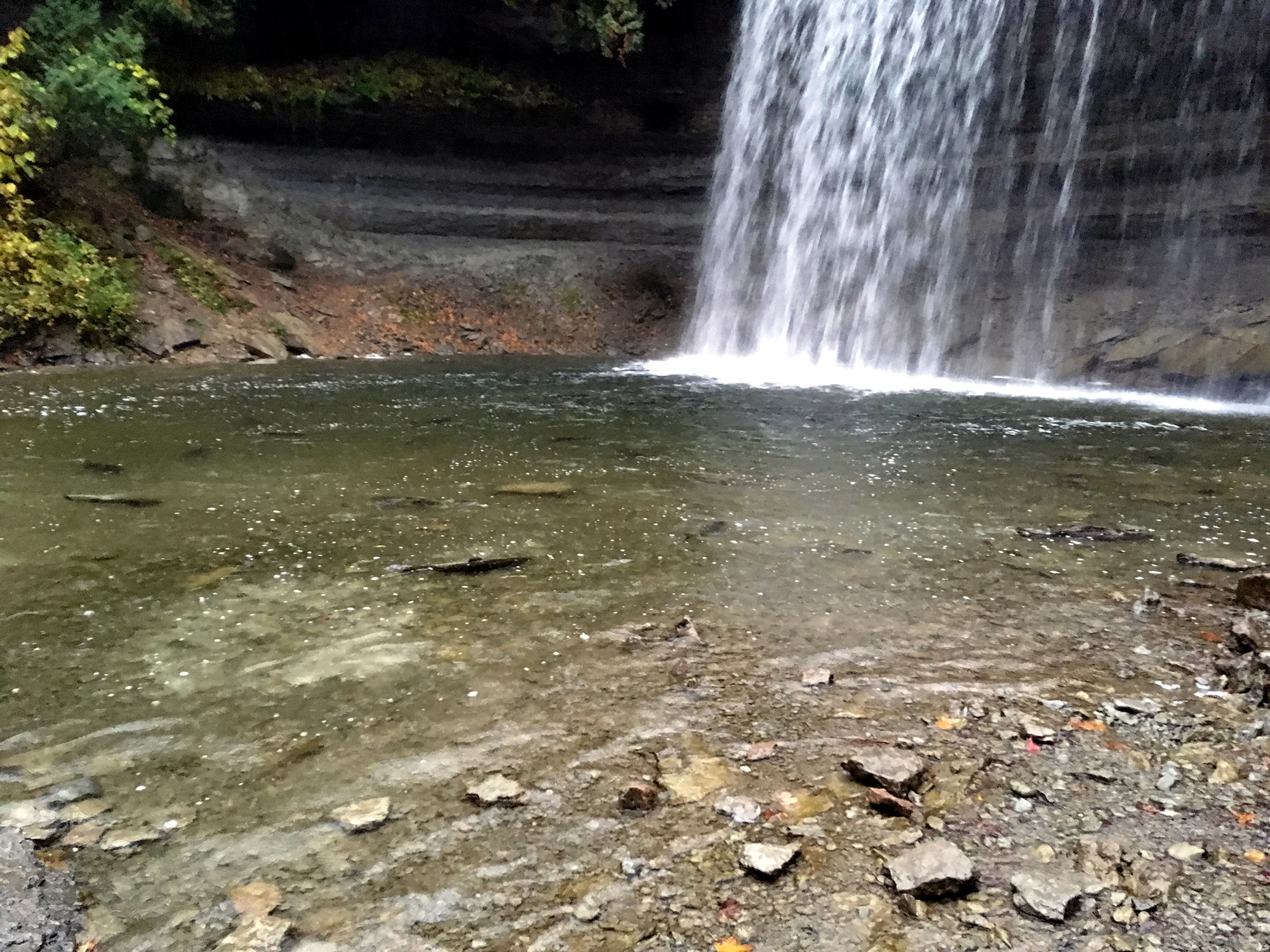 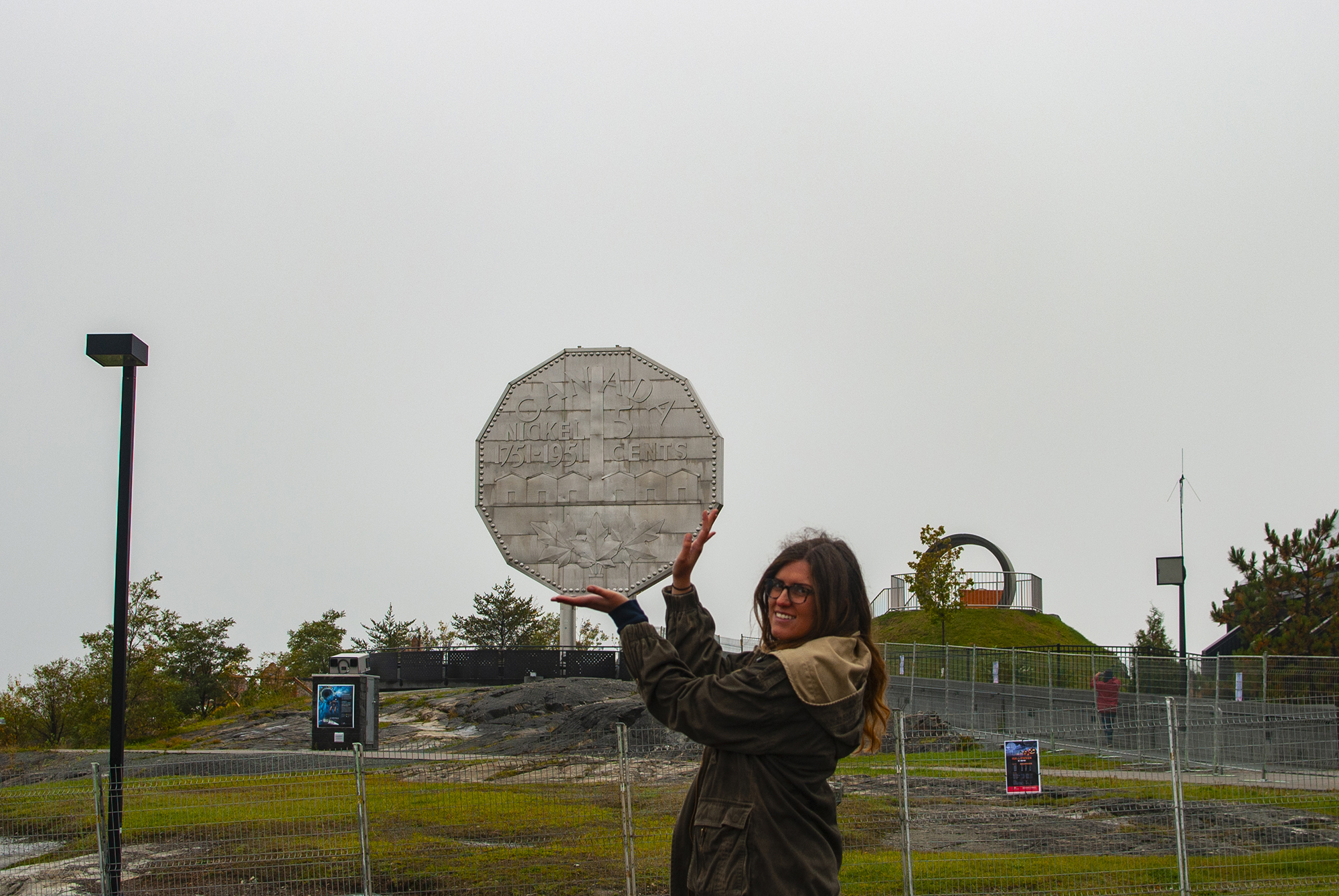 Sadly we didn’t have much more daylight left to enjoy the rest of the island so we headed back up to the van when the rain began to teem again as soon as we got inside. Even though we only scratched the surface on all the beauty that Manitoulin has to offer, we felt a pretty warm welcome. We spent that night on Goat Island, a neighbouring stepping stone for getting to Manitoulin, before continuing our journey north. The drive through Sault Ste. Marie and Batchawana Bay was littered with full, colourful trees that decorated the shores of Lake Superior. I always have to remind myself that Superior is, in fact, a lake and not the ocean since its “coast” feels so much like the seaside and its waves can really rip. Driving around the American side in Minnesota was breath-taking but much more commercialized with tons of rental cabins and inns spread around the north shore while the Ontario side is much more rugged and undisturbed. Both absolutely gorgeous, but each with its own vibe. 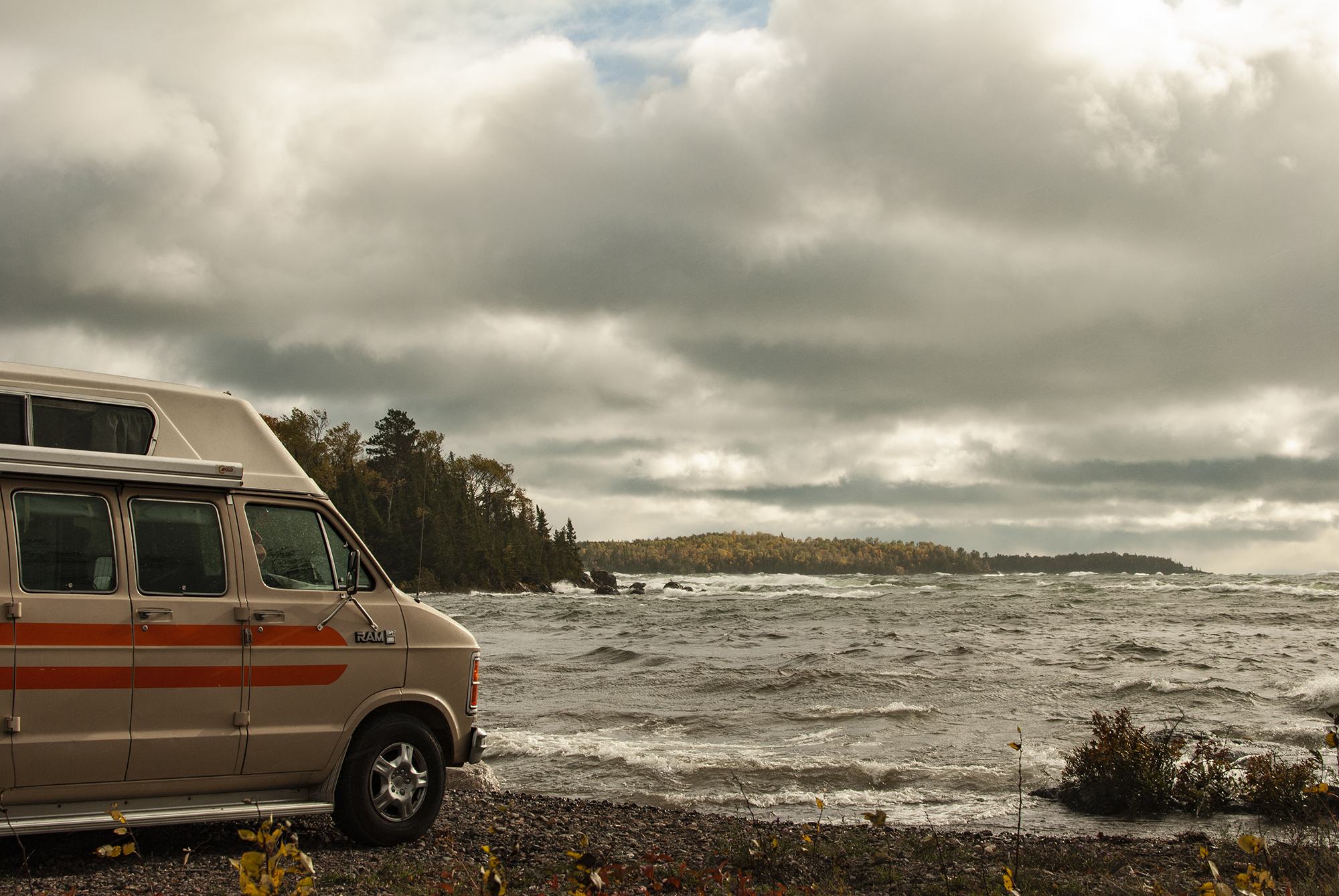 The shores of Lake Superior always feel so ocean-like

Continuing on our way, we had to make a stop at Chippewa Falls to take in just how aggressive and raging they were with the river levels so high. We’re talking sweep-you-away-to-neverland rapids that showed no signs of calming down. It had been raining pretty much non-stop since we got north of Barrie and that was made clear with how many road washouts there were in the northern part of the province and by these insane waterfalls that looked like they’d take no prisoners. Justin has done this Northern Ontario drive many times before and had never seen them even remotely like this. 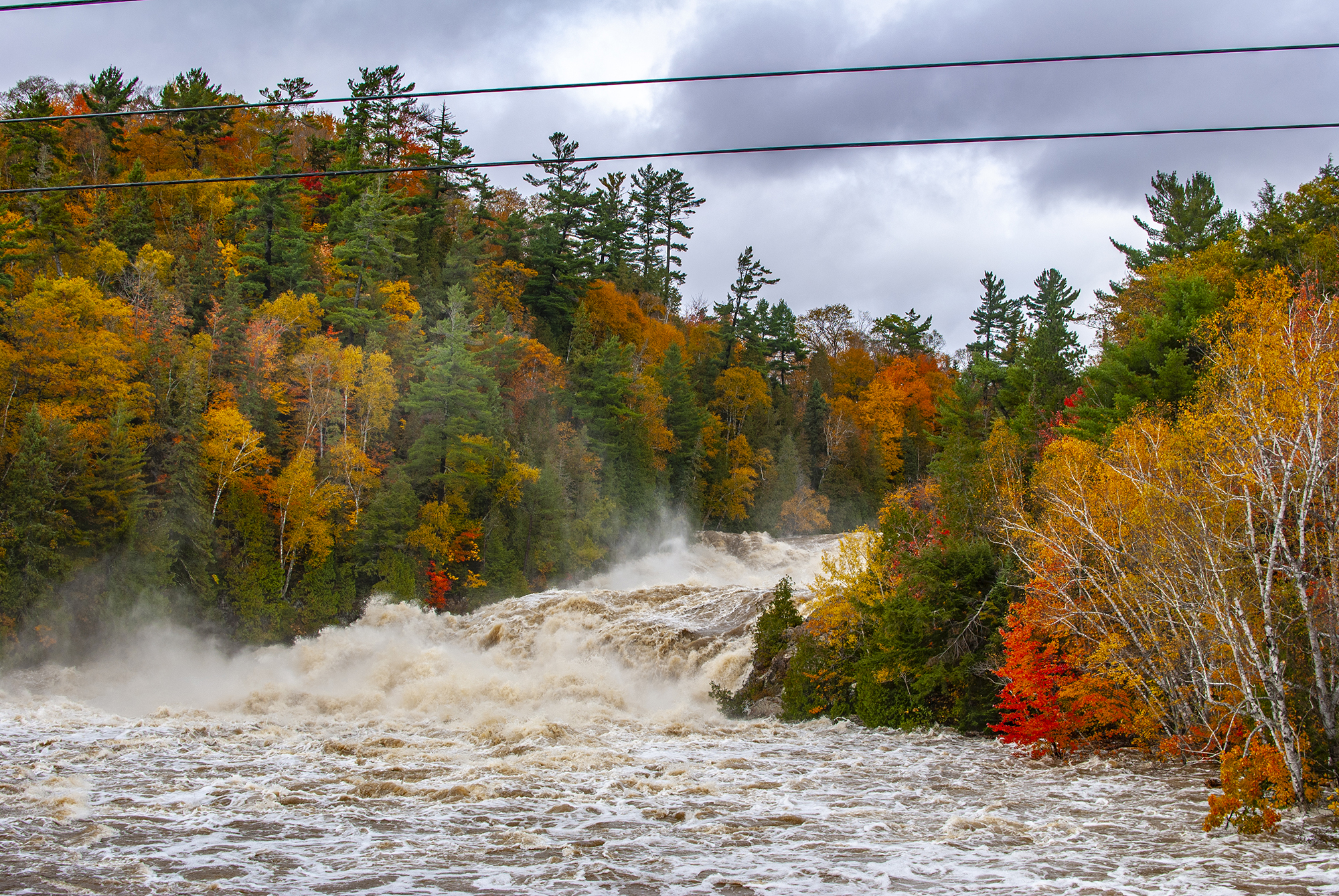 Chippewa Falls were ON FIRE!

Doing a bit of waterfall hopping, we tried to spend the night at High Falls in Wawa but unfortunately the road had been washed out. Although it wasn’t that late, it was starting to get dark so we had to act fast on where we wanted to sleep and decided to keep heading north toward White River. Within half an hour of being back on the road, it started to snow. The first squall we hit only lasted a few minutes but the second one was much more relentless and was accompanied by a pitch-black sky. The snow was coming directly at us and looked like white laser beams in the glow of the headlights. We managed to get to the boat ramp we were headed for fine but the snow kept on going. It wasn’t sticking much since it was still about 2-3°C (36°F) but we woke up to the surprise of not being able to see out the windows. It was time to dig out the snow brush and hope our tears wouldn’t freeze while we cleaned off the van. 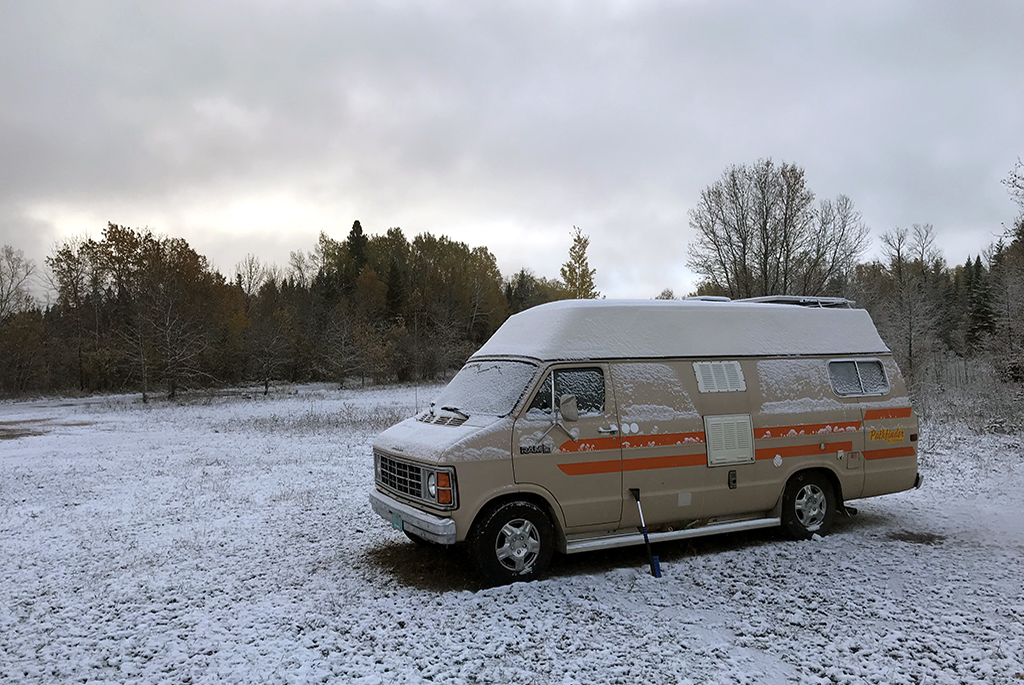 Not the craziest snow fall ever, but enough to make us want to get the f out of Ontario

The rest of the drive around Lake Superior just got more and more beautiful but had fully replaced the colourful leaves with more of a winter wonderland look. The small mountains and cliffs looked nothing short of majestic with a layer of bright white snow and tons of icy pine trees. We made our way past Thunder Bay to Kakabeka Falls to spend some time relaxing and drinking homemade wine with Justin’s relatives while it continued to snow outside. On the morning that we left, we had the intention of getting to Winnipeg before driving through the completely snow-covered Kenora area and finding ourselves in a full-blown snowstorm while entering Manitoba. This wasn’t looking good but like the rain clearing in Manitoulin, the snow seemed to completely stop once we reached the Winnipeg city limits and the prairies showed themselves in all their true, non-snow-covered glory. We were in a race against the weather now and wanted to get to the West Coast before things got any worse. Unlike last time when we spent two weeks driving through Manitoba and Saskatchewan, we were ready to do what most cross country travellers do and bomb through the prairies. It feels like it’s us versus winter now and we’re hoping to come out on top! 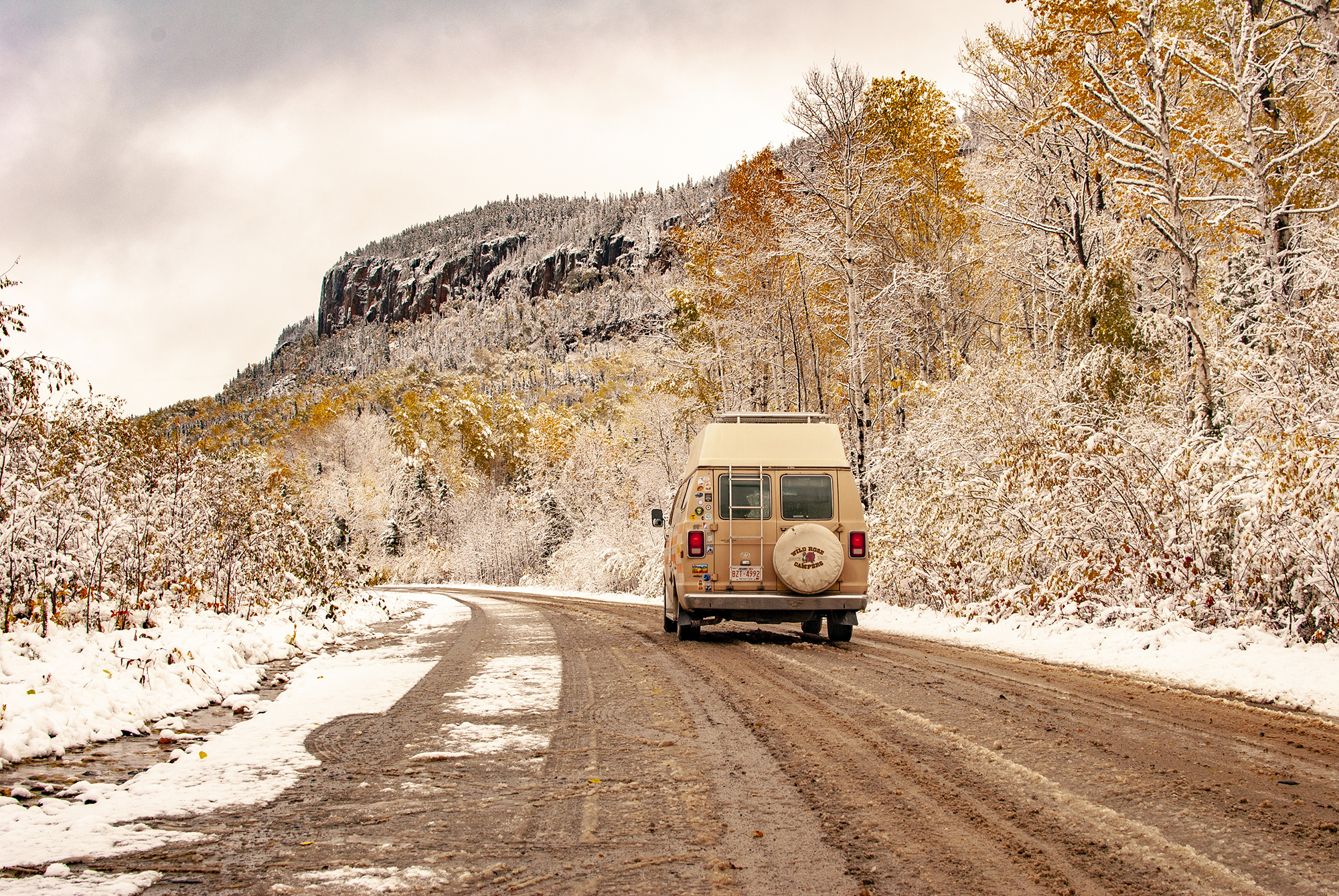 Things were pretty snowy around Neepawa, ON