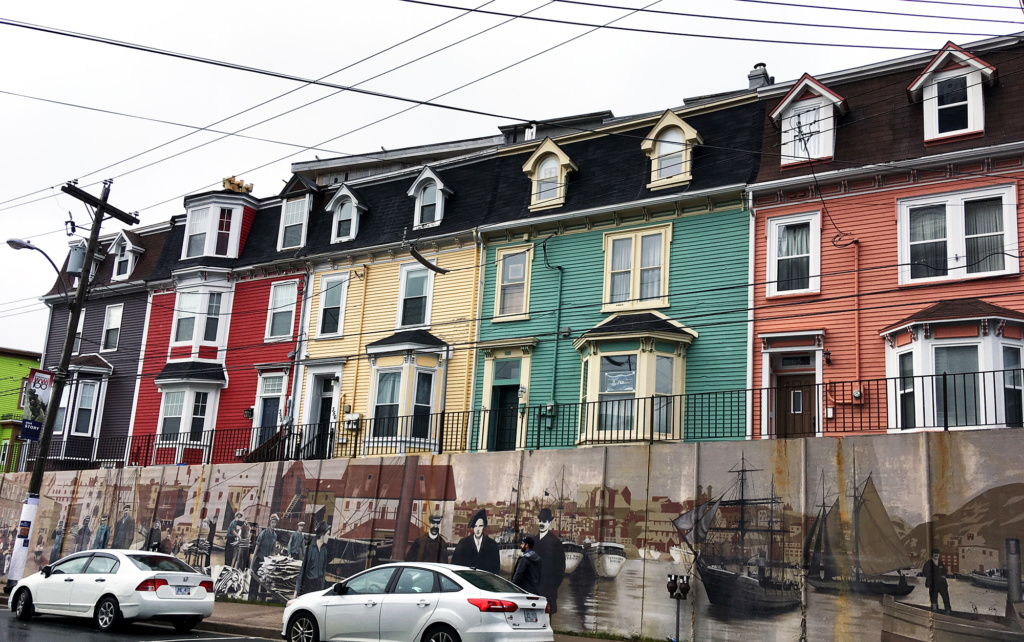 23 OctReaching the End of the Continent in Newfoundland

Boating into Clementine’s final province via Port aux Basques before spending some time in Rocky Harbour and Gros Morne National Park. We took our time driving across the island and checked out Terra Nova National Park before visiting Justin’s family in St. John’s, Newfoundland Labrador. The island must have really not wanted us to leave by treating us to a 23 hour ferry ride back to the mainland.

After a relatively smooth 7-hour ferry ride, we had finally touched down in our final province, Newfoundland. Despite the moose warnings, we drove through the evening to find a good gravel pit to hunker down in for the night. If the weather wasn’t so undesirable, Newfoundland would be a vanlifer’s paradise. Hundreds of gravel pits and tons of crown land make the boondocking possibilities endless. Despite knowing that there were a lot of spots around, trying to find them in the dark isn’t always easy. One technique we use is to study the satellite view on google maps and try to find what looks like a clearing; the other half of the battle is figuring out if it’s vehicle accessible once you get to it. After some dead-end leads, we finally settled into an old mining quarry just outside of Deer Lake and caught some shuteye before continuing on our way across the island. 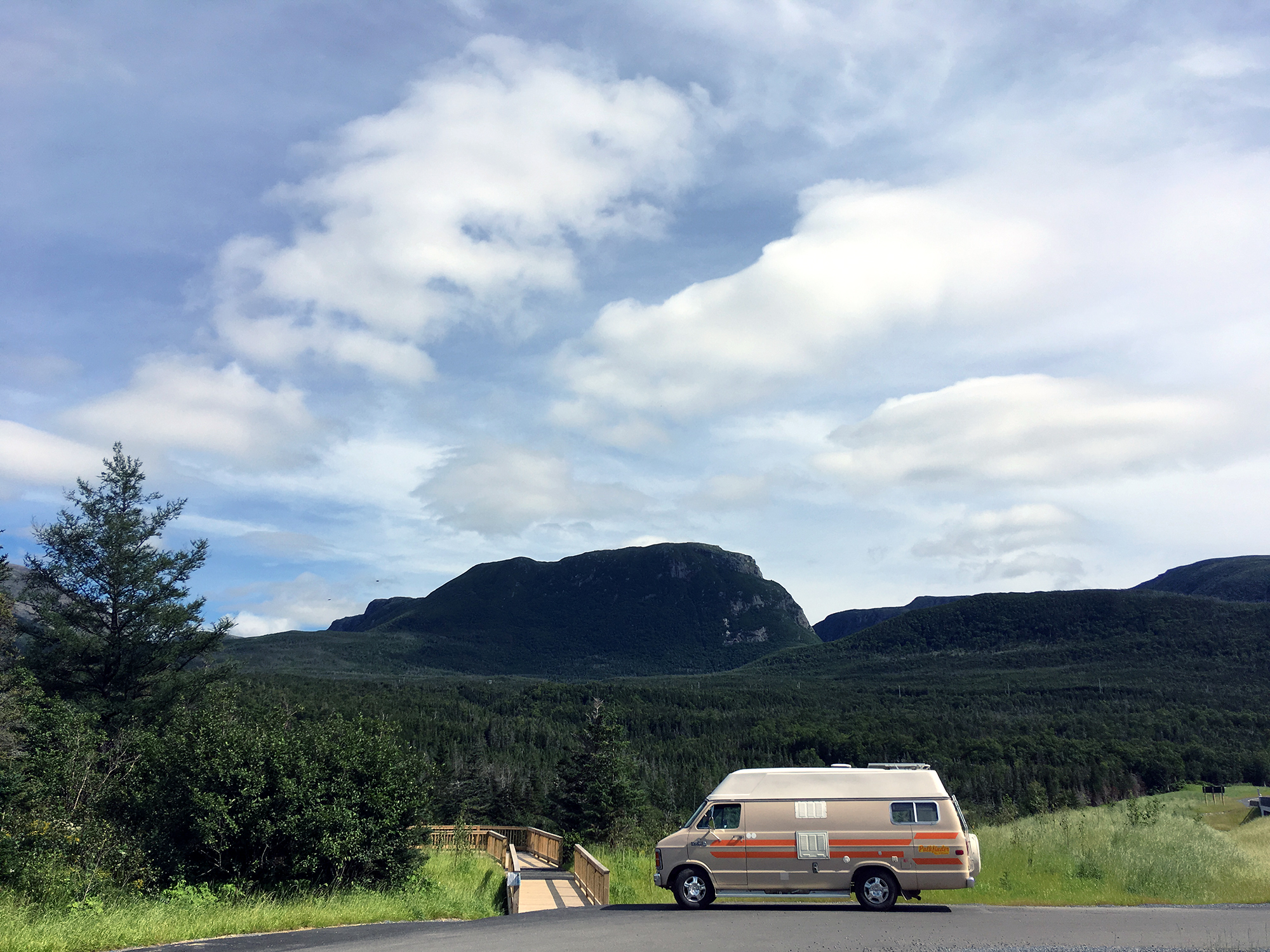 Clemie beside the Gros Morne itself – AKA one really old mountain

Our first stop was to take Clementine to Gros Morne National Park. We went to Gros Morne for the first time last year while we were still living in Toronto and searching endlessly for a van. We had a rental car and fantasized about how nice it would be if we could be doing this in our hypothetical van. Fast forward a year and here we were. It was awesome to visit again and have our home with us this time. We spent a few hours walking around Rocky Harbour and Lobster Cove before taking in the gorgeous views of The Tablelands from Norris Point. We did the Western Brook Pond Tour last year so didn’t feel the need to do it again but if you’re visiting for the first time, it’s a must. Maybe the next time we go we’ll do the hike (ambitious). 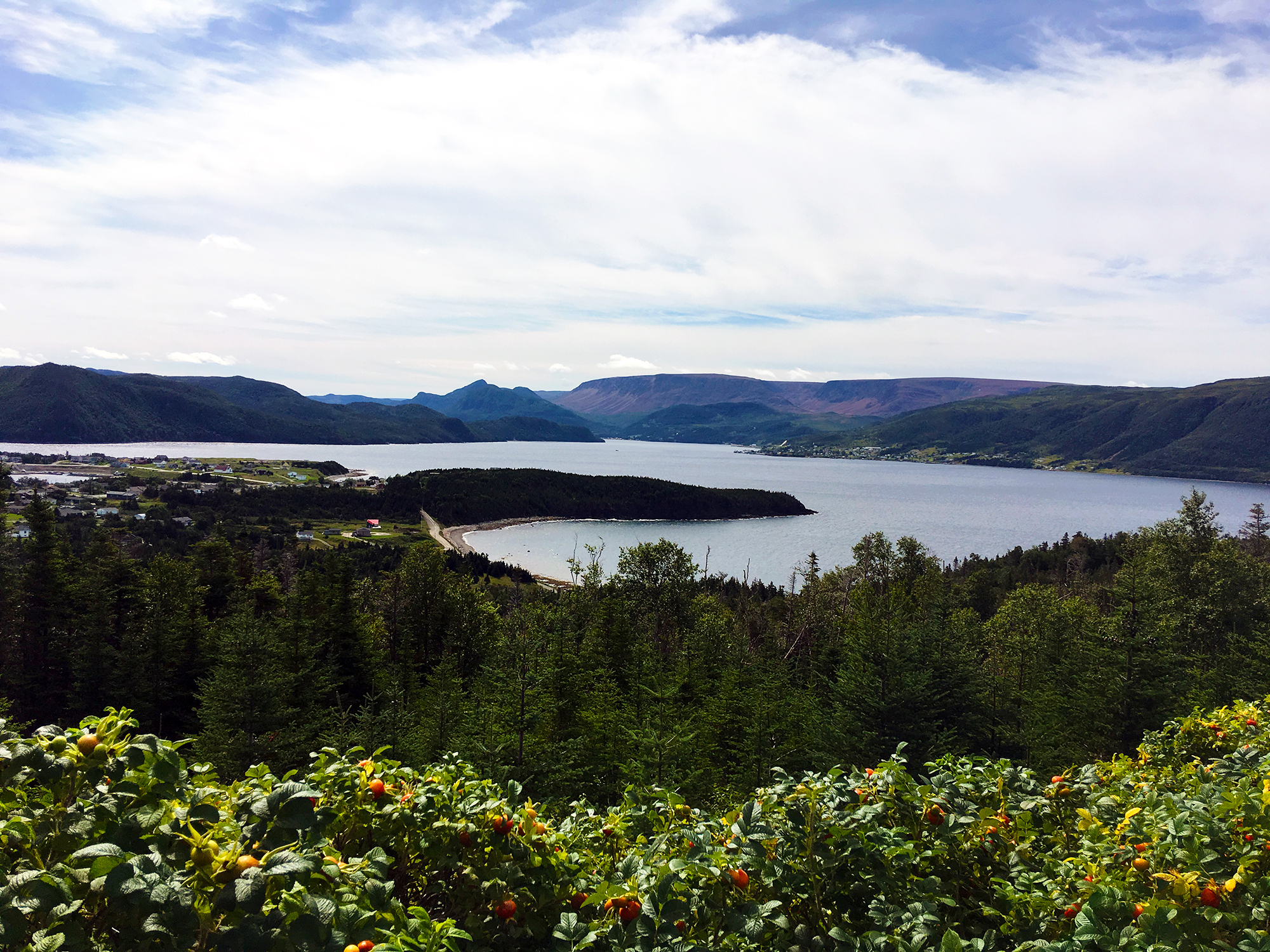 View of the Tablelands from Norris Point

We spent our second night just outside of Terra Nova National Park at an amazing spot we found called Alexander Bay. Sometimes you take a couple blind turns on a dirt road and end up at the best places. Other times you just end up on someone’s property and you’re being chased with a shotgun (just kidding). After a peaceful night’s sleep, we made our way to Blue Hill in Terra Nova and trekked up to a pretty cool lookout point from the highest peak in the park. Had it been the spring, this would be the perfect place to check out the icebergs. 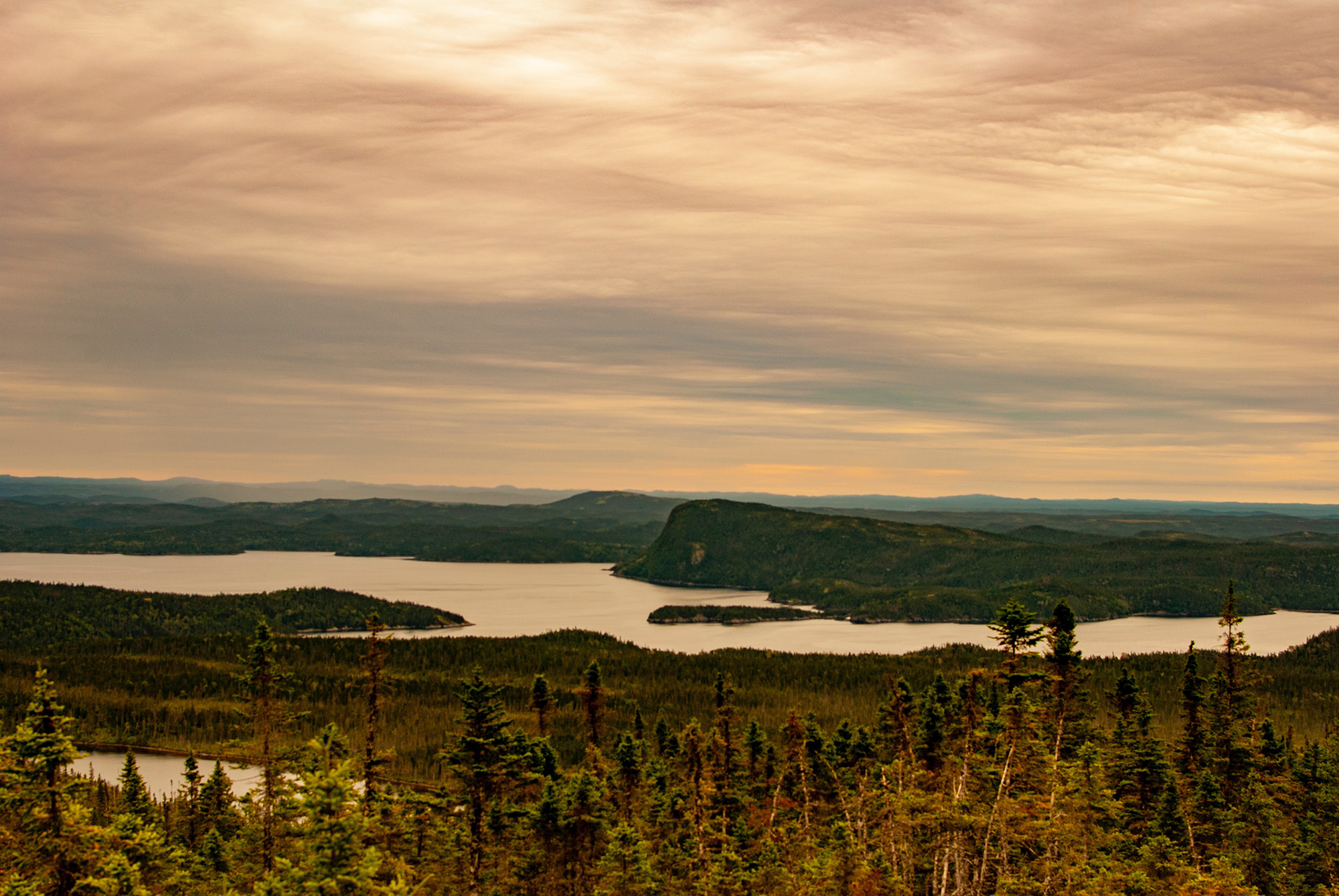 Once we got to town, we got a chance to catch up on a bunch of work and spend some quality time with family around Conception Bay South and St. John’s. We even got a personalized lesson on how to replace our brakes so we not longer have to pay quadruple the price at the shop – thanks Uncle Don! 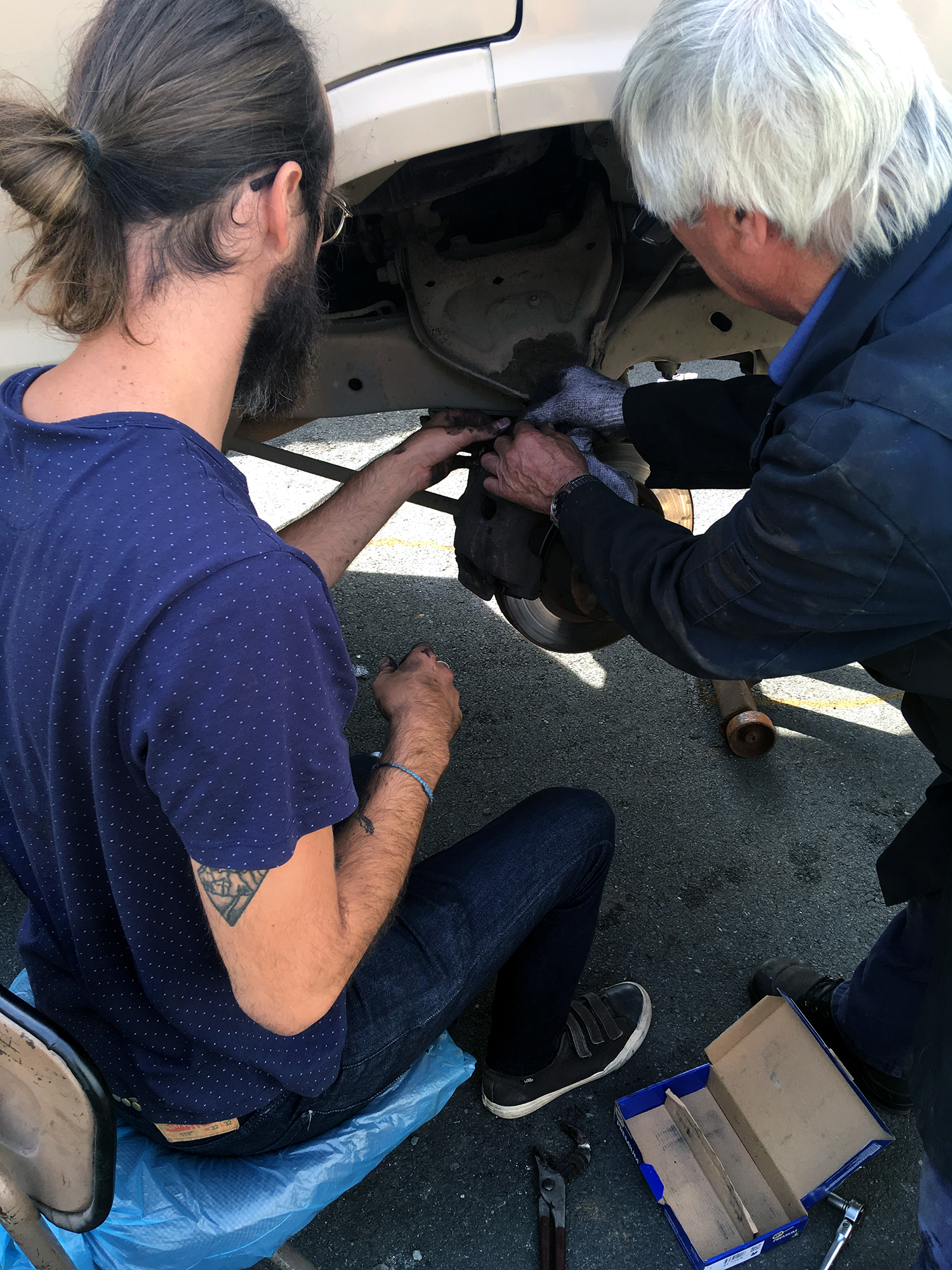 We also got a chance to check out The Rooms, a massive museum in St. John’s that happened to be having a pretty cool Mary Pratt exhibition. We learned about Newfoundland’s role in the war, lusted over one day exploring the Torngat Mountains in Labrador and contemplated if highly detailed paintings of salmon filets were actually just grocery flyers. 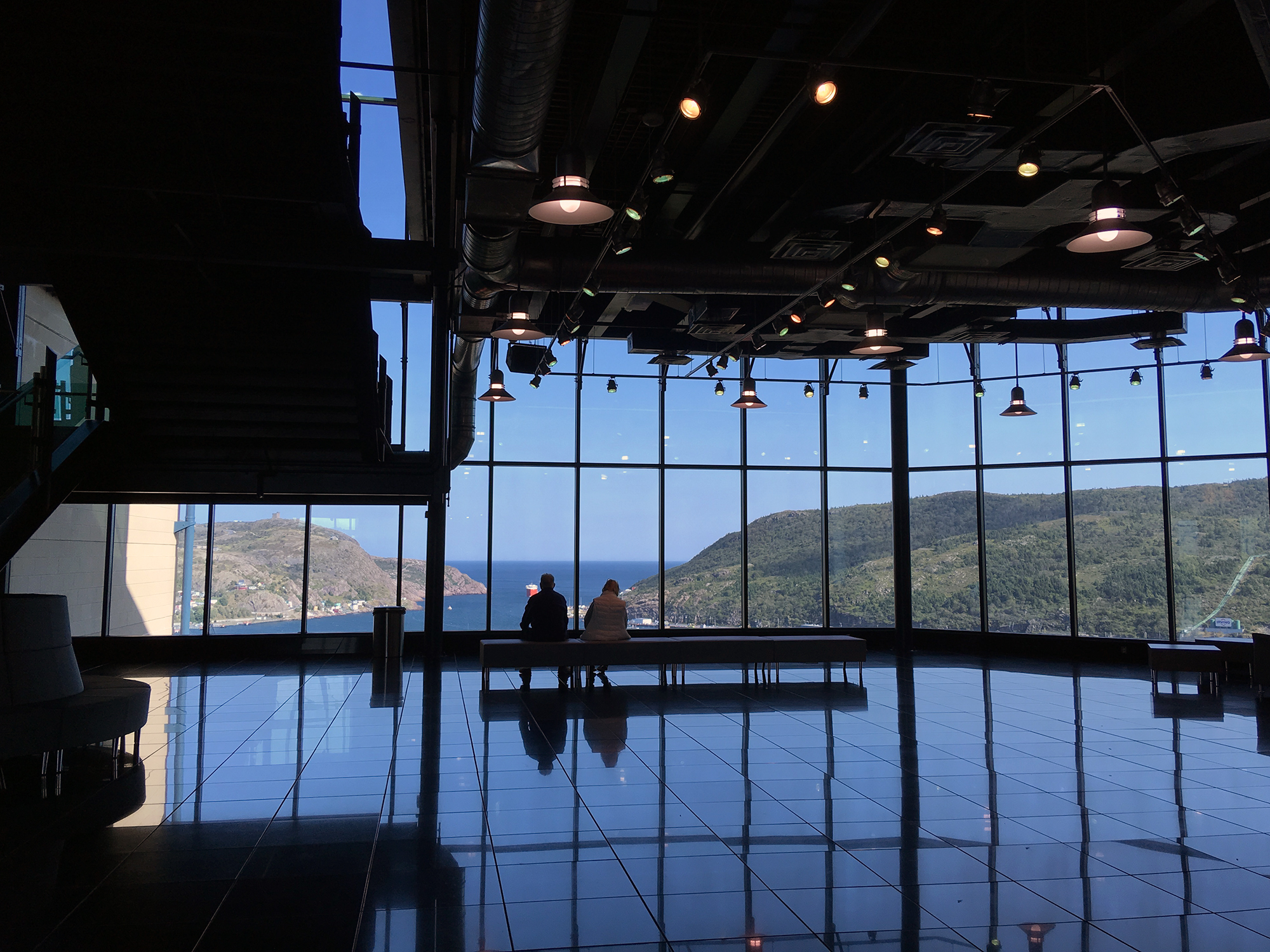 Pretty sweet view over St. John’s from The Rooms

One of our most important plans for our time in Newfoundland was to take Justin’s two grandmothers that still live on the island out for a trip in the van. One of them is named Clementine and played a big role in dissipating the fear in the family associated with hearing your (grand)son is leaving his apartment to drive to Mexico in a van older than he is – hence the name of our van. Anyway, we decided to take them to Cape Spear, which is the easternmost point in all of North America. As a surprise to no one, it was crazy windy and didn’t exactly make for perfect picnic weather so we drove along to Petty Harbour where we had some lunch and warmed up a bit. I’d say give it a year and the Nans will have their own van ;). 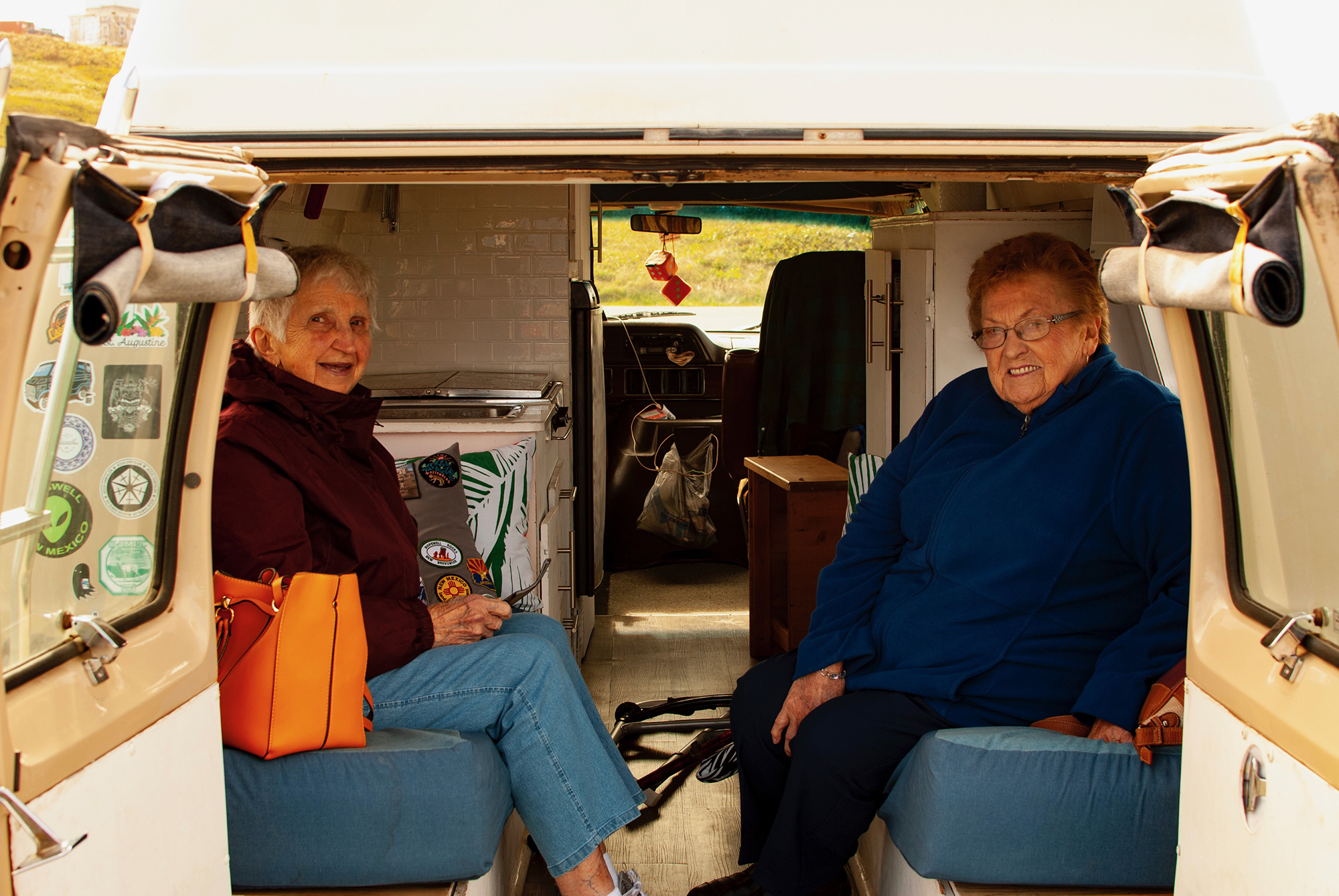 On our last weekend in the province, we spent the day with Justin’s dad and stepmom going on a little Avalon Peninsula roadtrip. We made our way to the lovely seaside town of Brigus and admired the quintessential colourful houses perched upon rocky hills despite the rain and heavy fog that the locals are oh so familiar with. We checked out the first English settlement in Canada in Cupids before having lunch in a super rad old building in Carbonear. 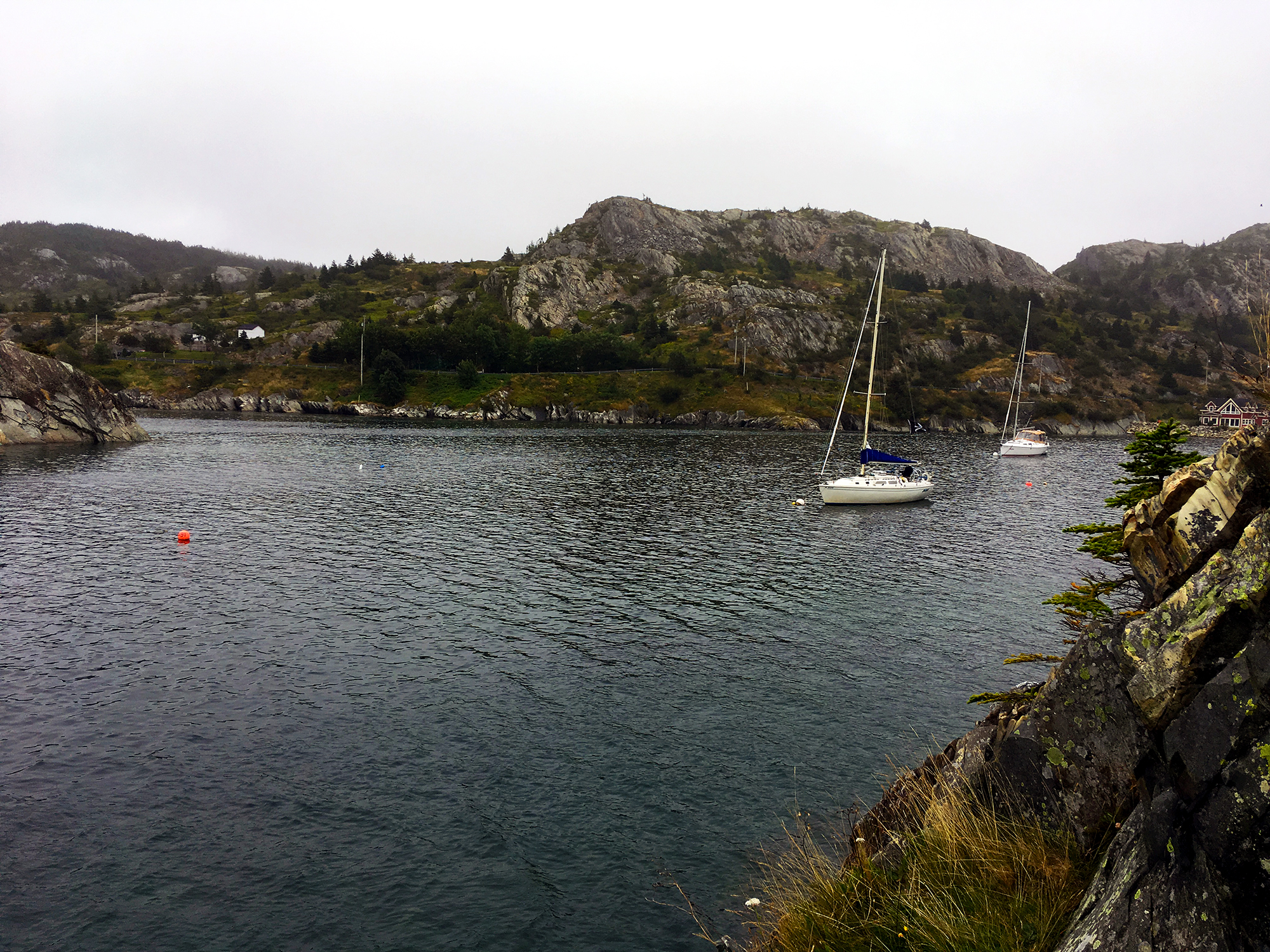 Some anchored sailboats in Brigus

The standout, however, was a tasting at The Newfoundland Distillery in Clarke’s Beach. They put themselves on the map with their seaweed gin but blew us out of the water with all six of their craft sprits. Using all local ingredients, from juniper to bake apples (cloud berries), all of their spirits were delicious and along with their charcuterie options and beautiful branding, it made for a pretty great afternoon. No, we don’t own shares in the business, we just really, really enjoyed it. 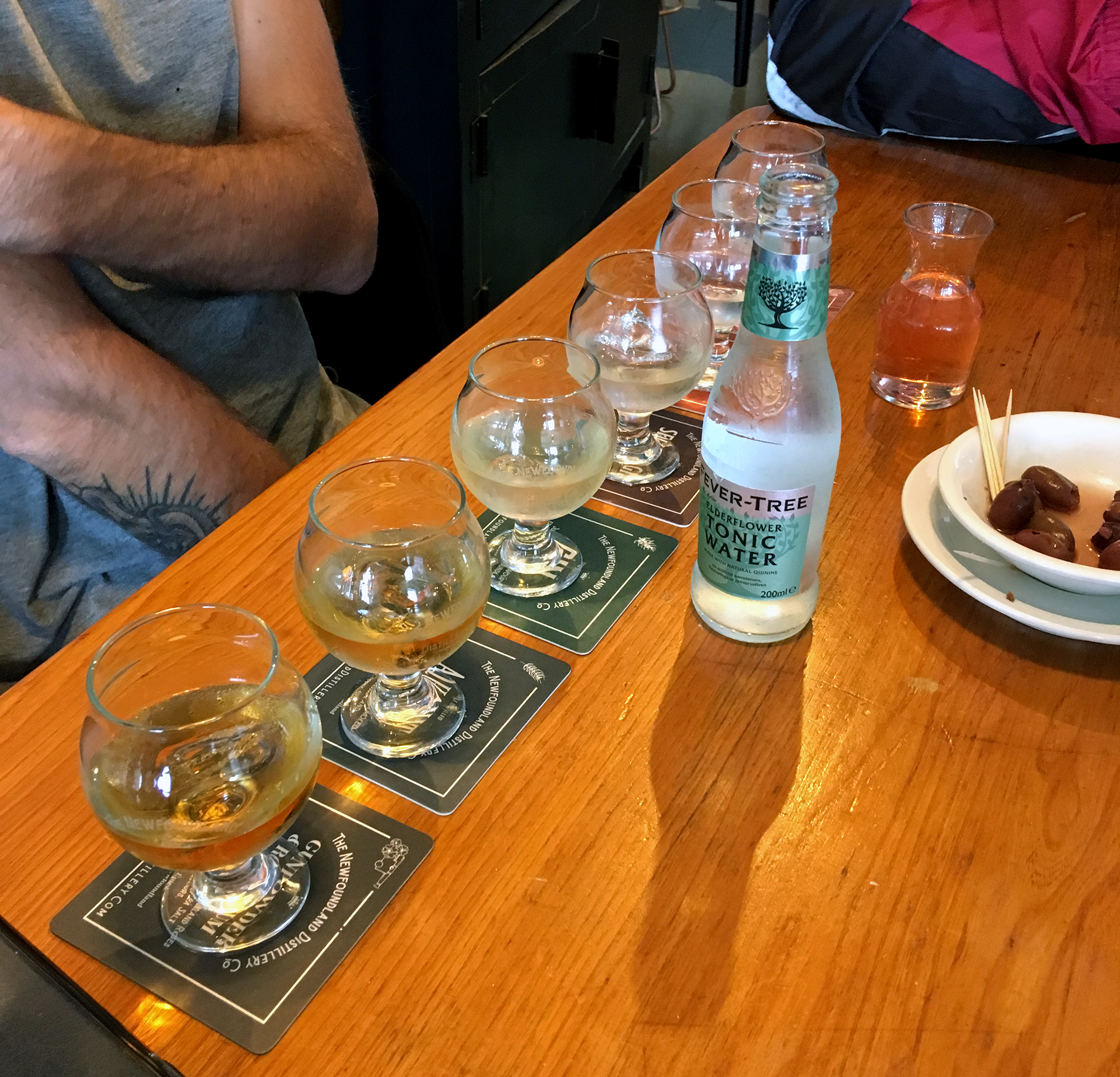 Bring on the tasty spirits at the Newfoundland Distillery

After spending our last days eating fresh cod and pulled moose (yes, moose), we squeezed in lots of family time before saying our goodbyes and making our way off of the remote island that Justin calls home. Newfoundland is a pretty special place to visit and is full of unexpected surprises and some hilarious town names. We didn’t get a chance to go this time around, but we’ll certainly add getting a beer at the Dildo Brewery to our list for next time. After doing some calculations on the extortionate amount of money we spent on gas getting across the island (gas ain’t cheap in NL – especially for guzzler like Clemie), we decided that it would save us time and money to take the Argentia Ferry back to Nova Scotia. If you’re unfamiliar with the NL ferries, you can either take the Port aux Basques ferry for 7 hours and drive about 9 to get to St. John’s, or you can take the Argentia ferry, which is only over an hour’s drive from town but boasts a 16 hour boat ride – on a good day. The catch is that the long Argentia ferry only operates in the summer so we were lucky enough to book the last ferry of the season (September 22 in this case). We decided that we’d drive down the night before and spend the night at Cape St. Mary’s Ecological Seabird Reserve before catching the ferry the next day. Unfortunately, this was a bit of a bust. First, most of the birds had already started their journeys out of the cold so the stars of the show were majorly lacking. Second, it was terribly cold and windy and there was a storm brewing on the horizon – perfect for a sail! Not. 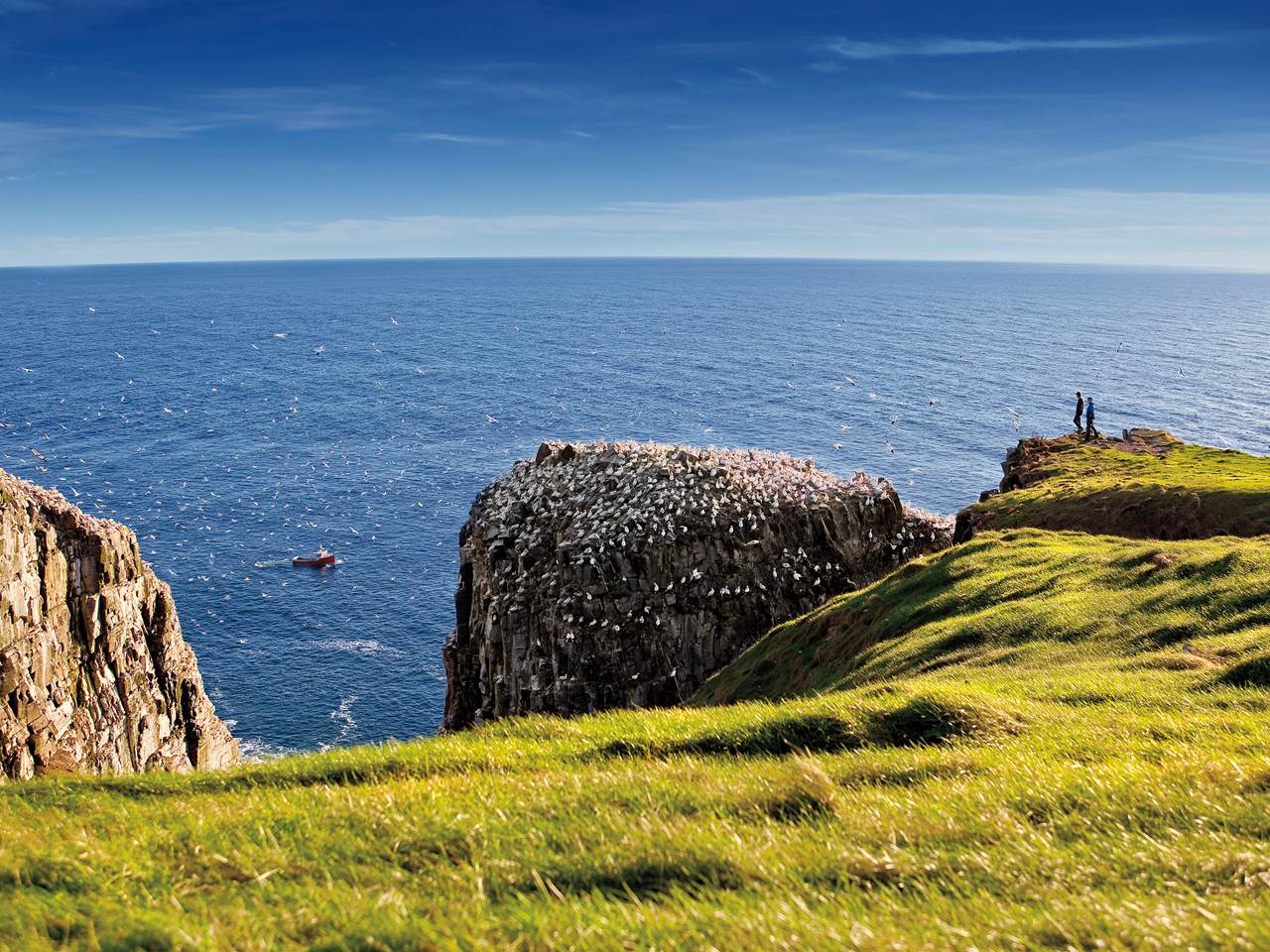 And so the Argentia ferry saga begins. We received multiple storm warnings and weather alerts and were notified by Marine Atlantic that our ferry departure would be delayed a few hours until the waters calm down but we were still to be there at the original check-in time. No big deal, it was an overnight ferry anyway, right? Long story short, a 16 hour ferry ride turned into a 23 hour journey with 5 metre (16.5’) waves and hoards of water splashing over the front of the boat. These weren’t rock-you-to-sleep waves, these were startle-you-in-the-middle-of-your-sleep-cause-you-might-die waves. Ok, I never thought we were going to die but it sure was disconcerting to be woken up to the sound of a rogue wave crashing into the side of the boat. Aside from that, the boat itself was pretty swanky and felt more like a Vegas hotel than a commuter ferry. Being cheap and booking last minute meant that we didn’t get a room so we made ourselves at home in some comfy recliners and “enjoyed” the ride. The boat was massive and had all the essentials on board: an arcade/casino, a buffet, multiple restaurants and lounges and even a designated rum bar. Got 16 hours to kill, might as well spend it drinking and gambling, right? 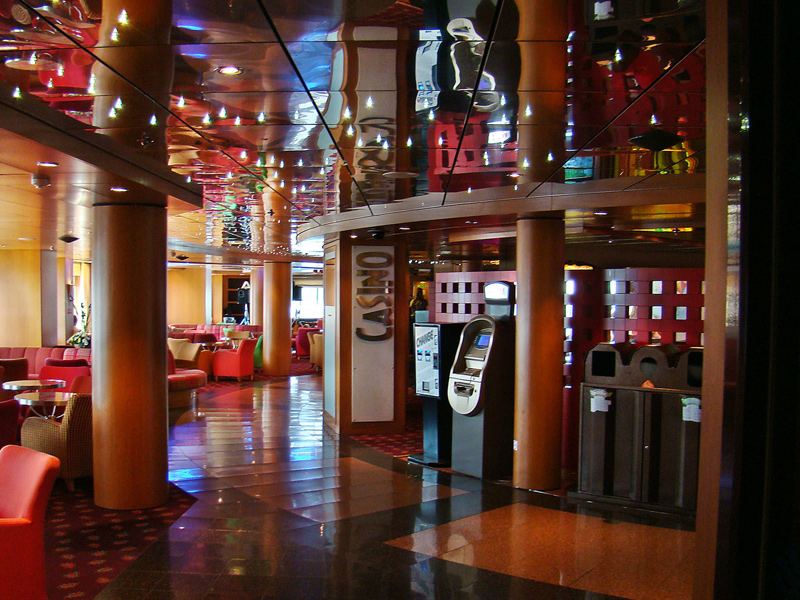 Once we got closer to Nova Scotia, the water calmed, the sun came out and all was well. We docked without a hitch and were super stoked to hop in the van and be on land again. Exploring Newfoundland was a huge milestone for us and marked a complete cross-country roadtrip across Canada. I think people are more surprised by the fact that Clemie has made it to more cities than most people since she’s no spring chicken. Sure, we’ve spent a lot of money on gas but for the places we’ve been able to go, it’s beyond worth it. As the weather is starting turn, it’s time to start heading west in hopes that we won’t get our fair share of snow like we got buried in at this time last year.