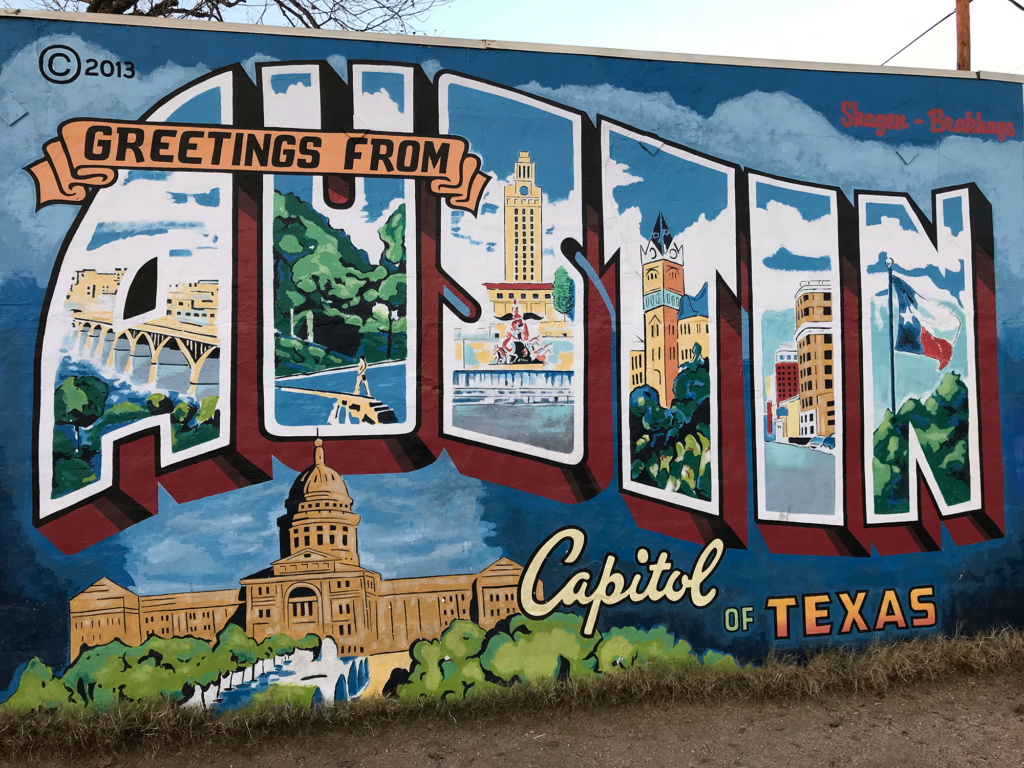 West Texas was all cotton and roadkill but we discovered a home away from home in Austin, TX.

There are few big cities that we are actually excited to pass through among our drives through weird small towns and Austin was definitely one of them. Coming from the Roswell, NM area, we broke up our drive a little bit by staying one night in a town called San Angelo. A major thing we noticed after crossing the state line was how much better kept these small towns looked compared to those of New Mexico. It’s quite unfortunate really that there can be such a visible wealth gap between two neighbouring states in towns just miles apart. That being said, we entered Texas through a small town called Plains, where the first thing we saw was a dead chocolate lab in the middle of the road. It was awful and had obviously happened quite recently judging by the folks on the side of the road. Little did we know, this would set the tone for the rest of our drive that day. Setting an all-time record for both of us (probably combined), we counted 38 dead deer on our 90 mile drive along highway 87 from Big Spring to San Angelo. That’s nuts! And that doesn’t include the multitude of smaller animals we lost count of. It’s clear that some of them were fresher than others, so the city/county/state/whoever must not collect them like they do back home and in (I assume) other states. When I googled briefly to see how that all works, all I could find were threads about if it’s ok to harvest the animal if you hit it…but that’s a different story. 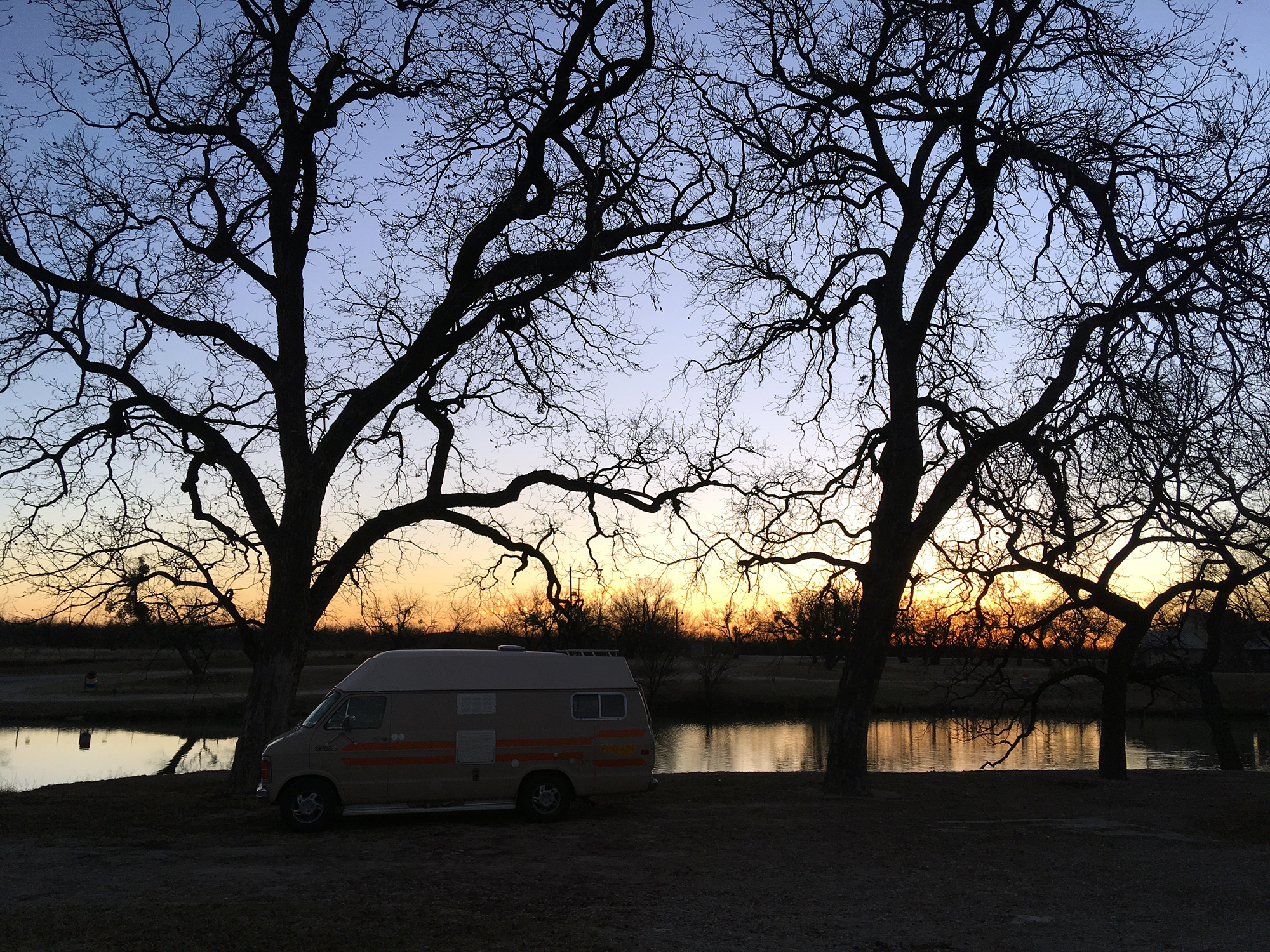 Aside from the plethora of dead animals strewn on either side of the road, the rest of the landscape was pretty much cotton field after cotton field. Most people don’t really consider how much cotton we consume but seeing the giant bales lined up by the dozen was pretty eye opening. Clothing is one thing but then there’s cotton balls, cotton swabs, tampons! It’s crazy to see the raw materials in such high volume when we’re so used to focusing on obtaining the end product. Anyway, if textiles are as interesting to you as they are to me, here’s some further reading about the current cotton industry and how insane in the membrane our consumption habits are. On that note, our camping spot for the night was in a nice little park in Tom Green County (lol) called Foster Park. It was picturesque with big pecan trees, a pond and lots of very talkative residents – ducks. Two of them were especially outgoing and walked right up to us and quacked away as if politely asking for food. They looked like a cross between a duck and a turkey, which we later learned were called Muscovy ducks. In the morning, we opened the curtains and they were camped outside our window waiting for us to wake up so they could politely ask us for food again. I say “politely” because they didn’t blatantly attack us but they definitely walked away with quite a bit of sass when we politely denied them. 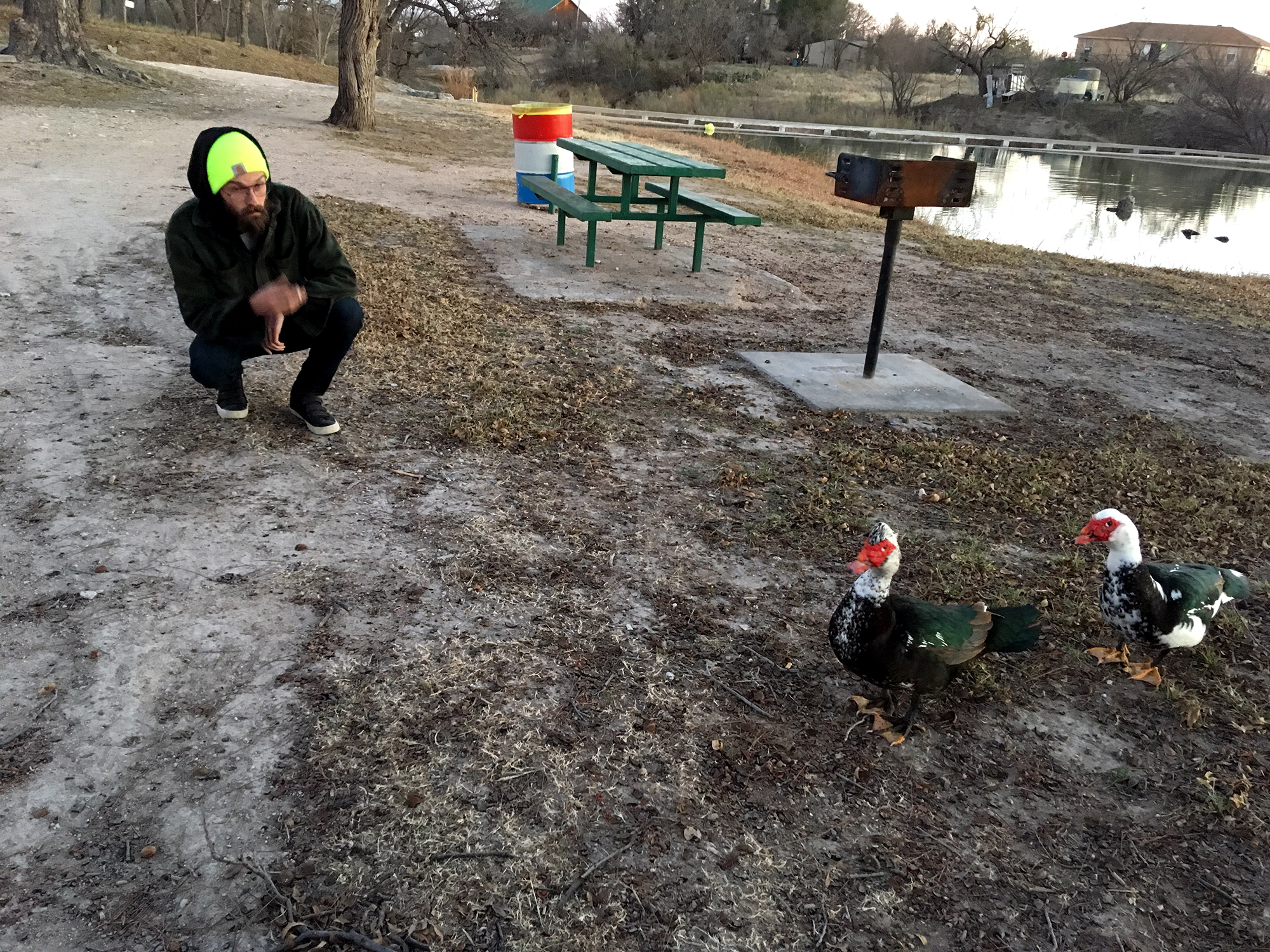 We were lucky enough to score a spot at Pecan Grove RV Park in the Barton Springs area of Austin. When looking for a park to stay at for the work week, we realized that this is THE spot to stay at cause it’s smack in the middle of everything. It’s Airstream central and apparently has a 2+ year waiting list for permanent residence, which leaves very few overnight spots. The park itself is nothing to write home about but it’s walking distance to tons of bars, restaurants and parks and is coveted by travellers and locals alike (don’t even think about trying to get a spot during ACL) so we were stoked to be able to stay there. The week was mostly comprised of eating and drinking as hard as we were working, but that’s our kind of party. 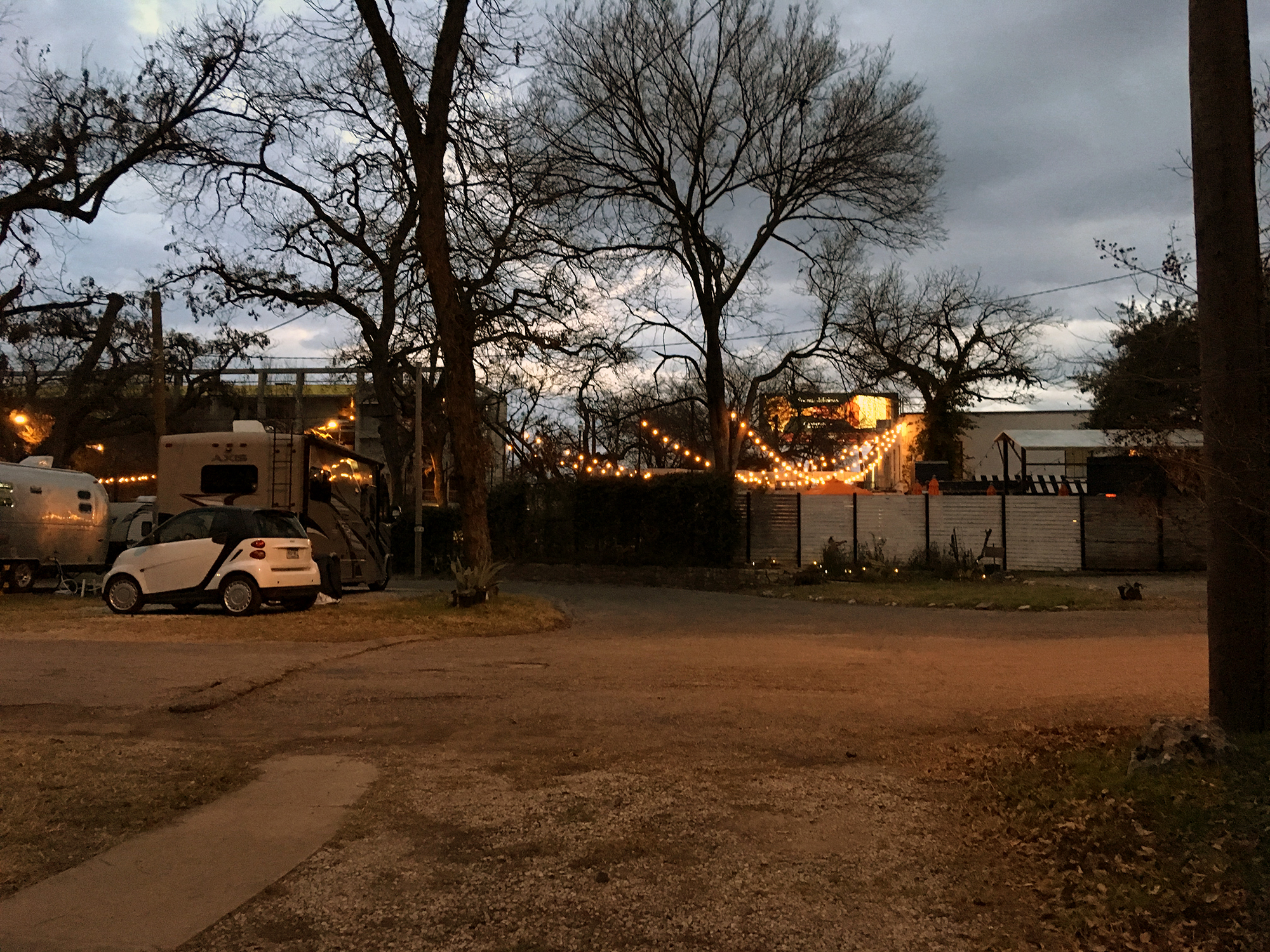 Pecan Grove RV Park is nestled amongst tons of bars and restaurants. The patio of that restaurant with the string lights is basically on-site

In addition to being spoiled with our location, I have a friend in Austin that showered us in delicious food and drink (not literally – we’re not that gangster) and made sure that we checked out all the different neighbourhoods to get a feel for all that makes Austin the bustling place that it is. We had a good time checking out the endless food trucks and eating our bodyweight in melty brisket and cornbread. Justin even paid homage to our friends from Foster Park by having Muscovy duck for dinner one night. We had never heard of these things and then they pop up on a menu the next day – serendipitous some (non-vegetarians) might say! 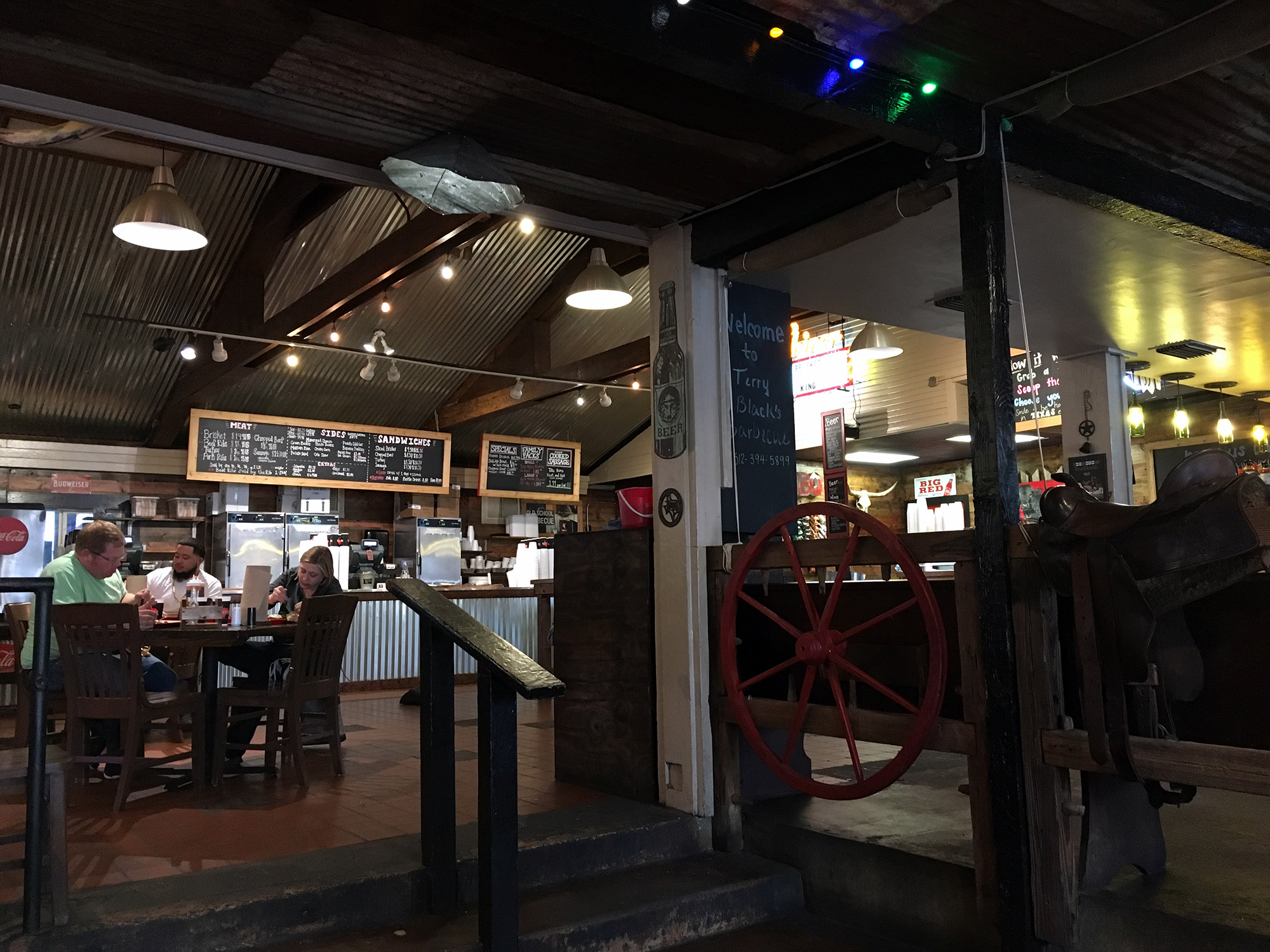 As our luck would have it, the week we were in Austin was the coldest they’ve had all season and even shut the city down one day. As Canadians, it felt like a nice fall day to have a high of 1°C (34°F) in January but for Texans, this meant cancelled school, closed businesses and no driving. As comical as it was, we had to remind ourselves that this barely ever happens there so it can actually be a big safety concern since Austinites already seem to suck at driving, even in good weather. Before the freezing rain storm hit, it was a decently warm day that we spent walking along the river to the Stevie Ray Vaughan statue. Amid all the cute dogs, there were so many people running, rollerblading and biking. We sat on a park bench, tired and hungover, as people of all ages continuously zoomed past us and made us feel pretty lazy. It was exhausting to watch how active these people were. Wasn’t enough to make us do anything else but indulge in more food and drink that night though. Before leaving town, we loaded up on Topo Chicos and spent a night in Round Rock, just north of Austin, crashing in our friend’s driveway. This is a cool little town that we probably wouldn’t have otherwise checked out but we’re glad we did. Despite being just 20 minutes away from downtown Austin, Round Rock is doing its own thing and doesn’t fall into the typical neighbouring city-suburb category. Even on a weeknight, the town was alive and had lots of shops and restaurants in old timey buildings with lots of character – contrary to the very young feel that Austin has. 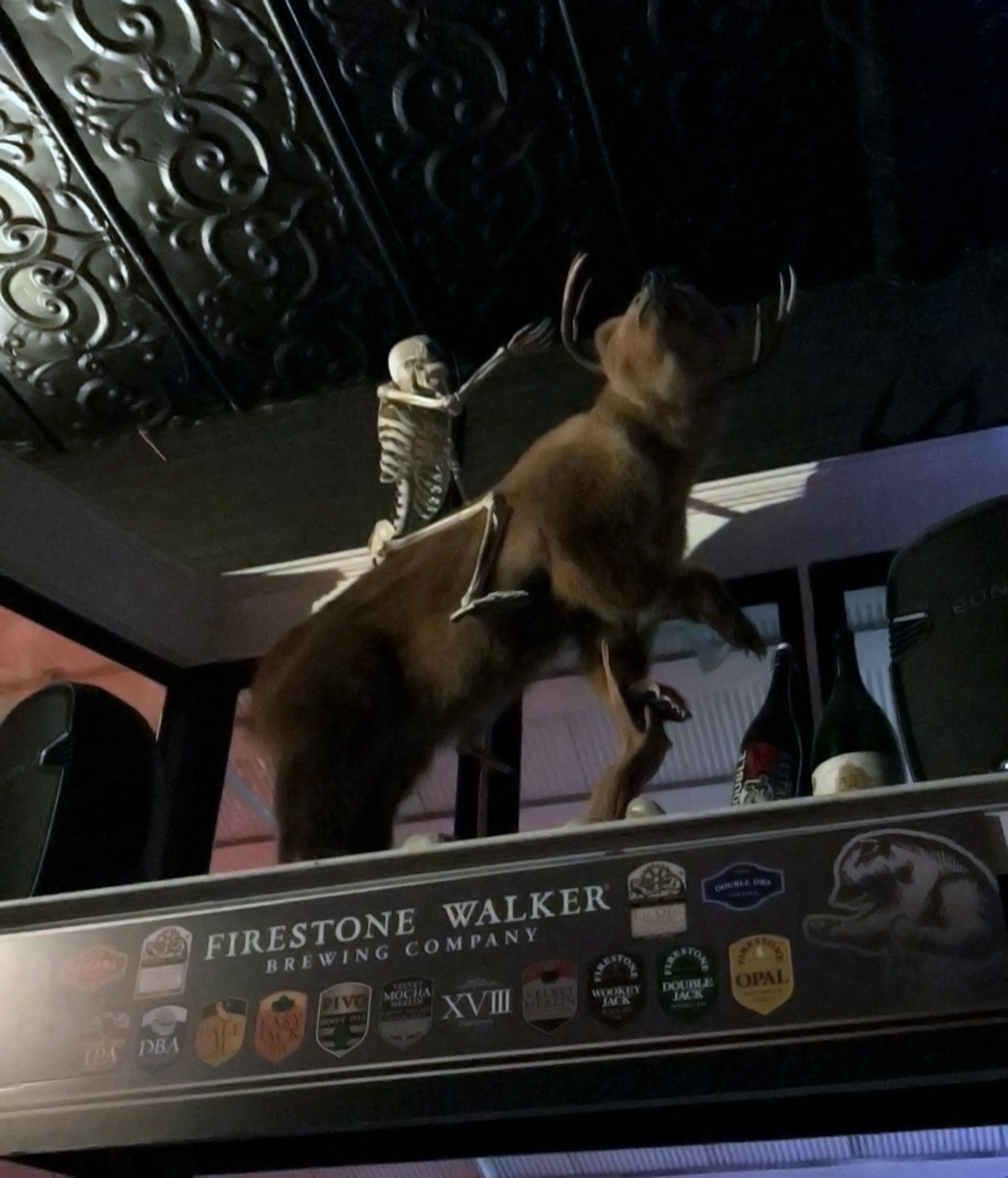 Just so we’re on the same page, that is indeed a skeleton riding a bear with antlers. Bar decor at its finest

Our next stop was the “third coast”, as the Texans like to call it, to get out of the city and into some free beach camping (music to my ears). The weather forecast wasn’t promising but still beat the 20+ cm of snow Toronto was getting. It just so happened to be torrential rain the day we left, which is everyone’s favourite beach conditions, right?! To make our rainy drive more bearable, we stopped in to try Whataburger for the first time after seeing so many of them in Texas (this is worth clicking). Some context behind why this is noteworthy: we had been raving about how much we loved In-N-Out when we got challenged by friends saying that Whataburger is way better. My verdict still has to go to In-N-Out cause Whataburger was just too big and too mustardy (weird complaints to have, I know) but once we throw Shake Shack into the mix, it’s anyone’s game. Let’s get into the hard-hitting stuff now, which American burger chain has your vote? 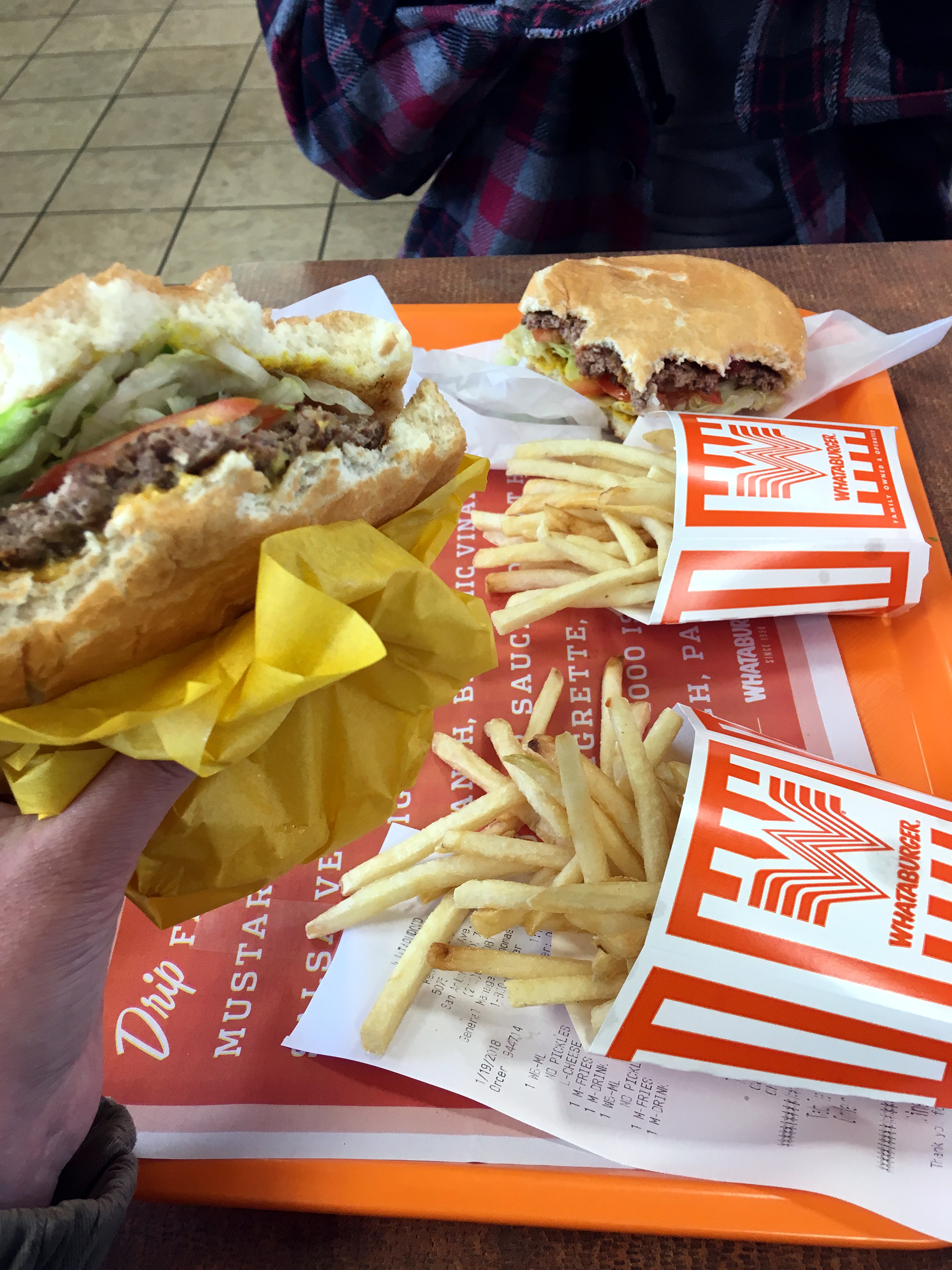 What a burger indeed