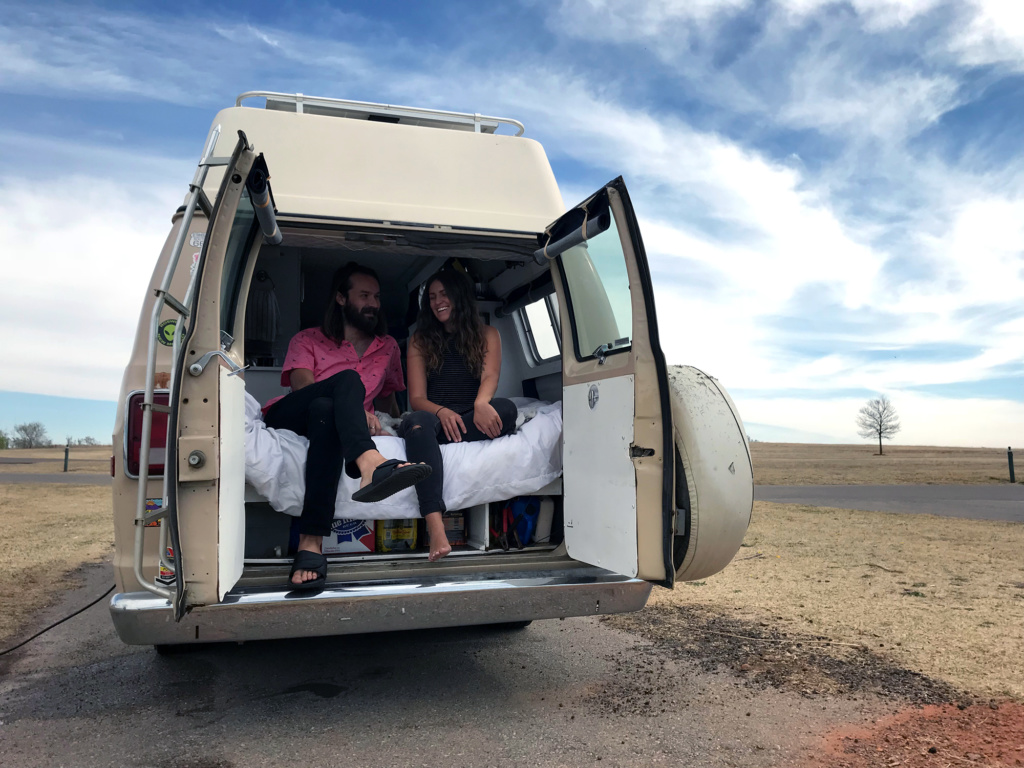 Boring drives made exciting by persisting engine troubles through Arkansas, Oklahoma and our return to Texas.

As soon as we crossed the bridge into Arkansas, things immediately got pretty flat and farmy. This wasn’t all that shocking since all I knew of Arkansas was from Netflix’s Ozarks and of course, The Simple Life. Because everything on TV is undoubtedly 100% real, dairy farms and Sonic locations paved the way to our camping spot for the week in Hazen, less than an hour outside of Little Rock, AR. Now that we have electricity taken care of by the sun, we just need to make sure that we have cell reception to be able to work. Oddly enough, this lovely WMA had better AT&T service than most cities. At one point, we moved to the site across the street to get more unobstructed sunlight on the solar panel and discovered that there was even a fire ring and a water tap on that side – we were plebs to have chosen that first site! The water pressure on the tap was so intense that I got soaked multiple times just trying to fill up our tank. Barely anyone else passed through with the exception of another van that took our original site as we were leaving…suckas. 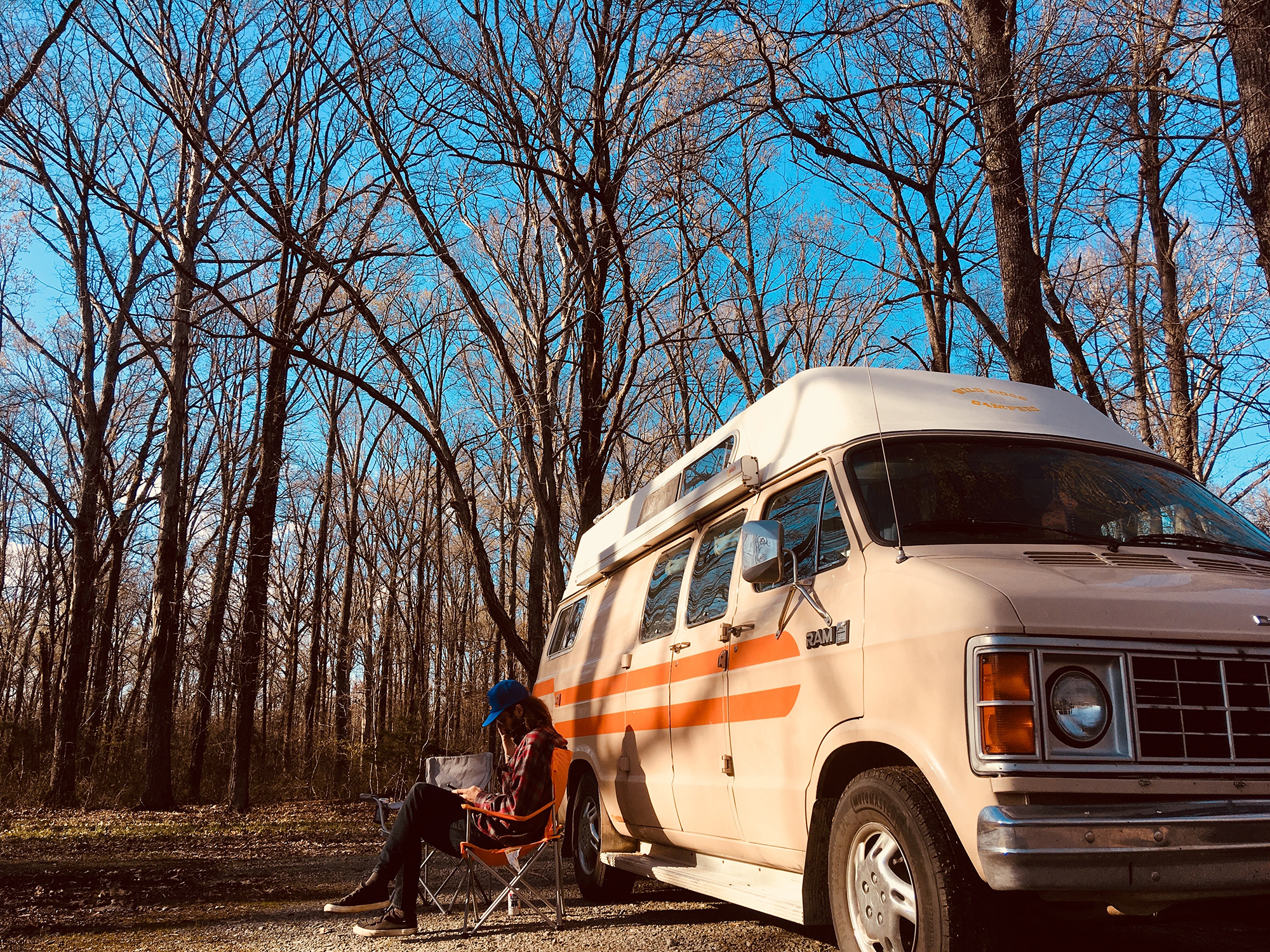 Can’t beat relaxing in the trees in Hazen, AR

Heading west, we found another spot along the Arkansas River that used to be an established campground run by the Corps of Engineers but seems to have been recently let go from being maintained. I say this because there are remnants of where trash bins and other facilities used to be and the days of the small bathroom being cleaned were long gone. There were so many dead leaves on the floor that it was a challenge just to get to the vault toilet. But the worst part was that the walls were entirely covered in termite nests and bugs flew up at me from the toilet bowl, which made me think there were more nests below the seat, which then made me think that I’d rather just do my business outside. That being said, the fact that there still is a vault toilet present is a huge bonus for any free campsite. Aside from the less than ideal bathroom, there are designated campsites with level concrete pads, fire grills and picnic tables surrounded by towering trees overlooking the river. This seems to be a popular spot among locals to come down for the day and fish with a few scattered campers staying the night. 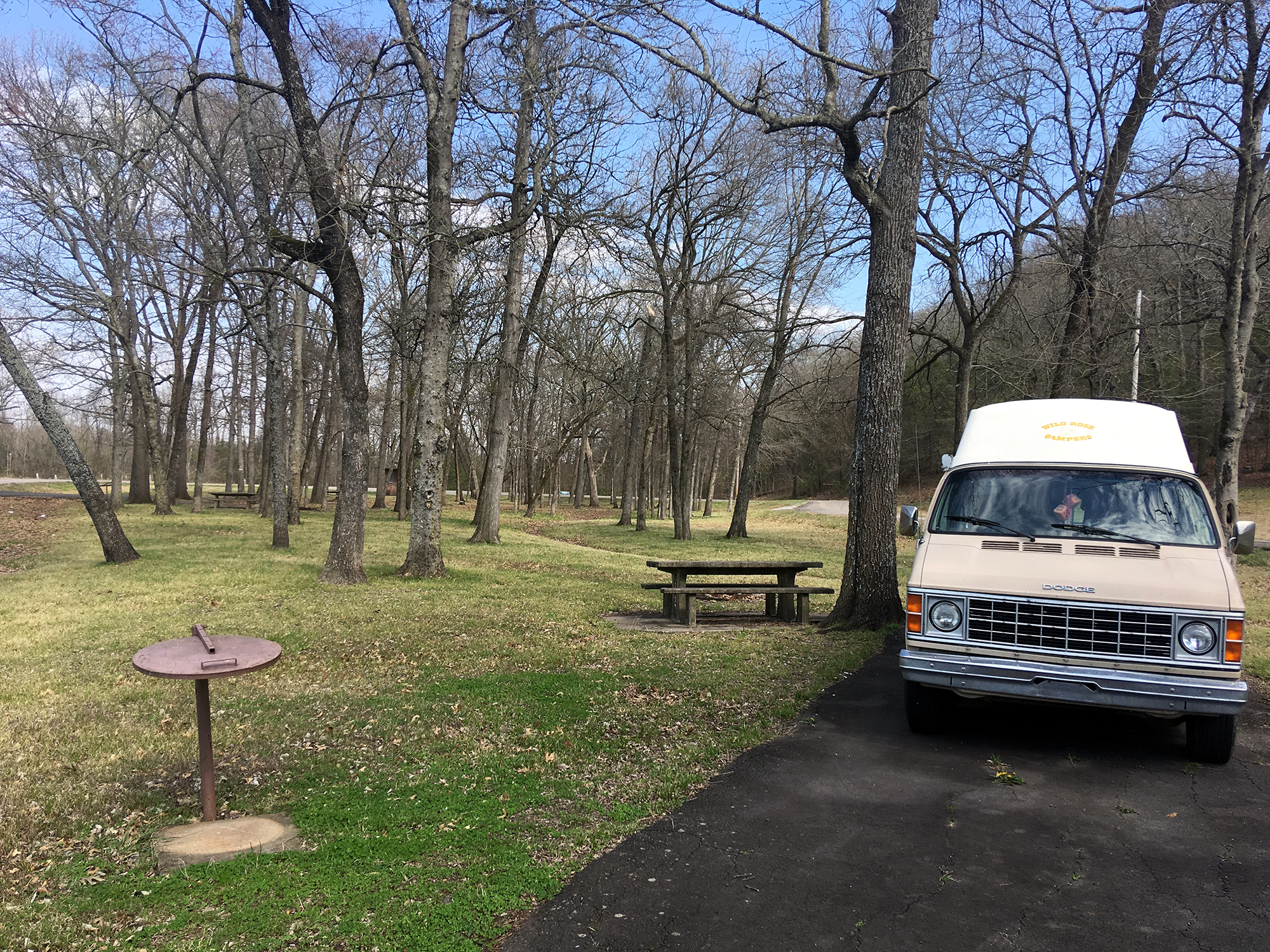 As we were ready to take off, Clementine had other ideas and didn’t want to start. After replacing the starter, this felt very different from the starting issues we were having before. The only thing we could think of was clogged fuel lines so we blew out all the lines and gave the seemingly clean fuel filter a good shake and it eventually started. As great as the whole “just shake it til it works” method can be with vending machines and…well, not much else…we knew we’d only fixed the problem temporarily by moving the dirt around within the filter. At least we assumed it must be the filter since the fuel pump was working fine. For the astronomical price of $6.50, we bought a new one and carried on to the very unsuspectingly cute town of Fort Smith. One very important tip to note if you’re travelling through Arkansas is that there are many dry counties. This means that you might have to drive across the river or to a neighbouring county to find beer at a gas station or supermarket – and don’t expect to be able to buy alcohol on a Sunday. We learned these things the hard way. Topping the charts as the windiest drive in history, our ride through Oklahoma was not a very pleasant one. If you’re in the market for a van and opt for a high top, be prepared for some interesting wind driving. Of course some are worse than others, but Clementine is like a sailboat and it can be a battle to not sway into the other lanes, especially in places like this where all the roads are surrounded by open farmland – nearly the whole way was like driving through a Windows XP background (you know the one). This means driving slower and making more stops to take breaks because it can get pretty intense. Aside from the wind, Oklahoma was all around confusing. It goes from Native American names to Spanish names then all of a sudden it becomes…Canada? We crossed the Canadian River multiple times while venturing into Canadian County and ultimately arriving in a city called Yukon. To make things even more confusing, this Yukon is really into Garth Brooks. Ok, maybe he grew up there but it’s still funny for us to see how different Yukon, OK is from Yukon Territory – and I mean that mostly in terms of landscape, not Garth Brooks fandom. Our wild drive landed us in Elk City, where we camped at another shockingly free campsite that even had water and power hookups. Right on Elk City Lake are five paved sites, a kids playground and a bathroom that wasn’t a termite festering ground AND even had toilet paper. Not the most private or secluded but for a quick overnight after a long day, the sun setting over the lake was just what we needed. 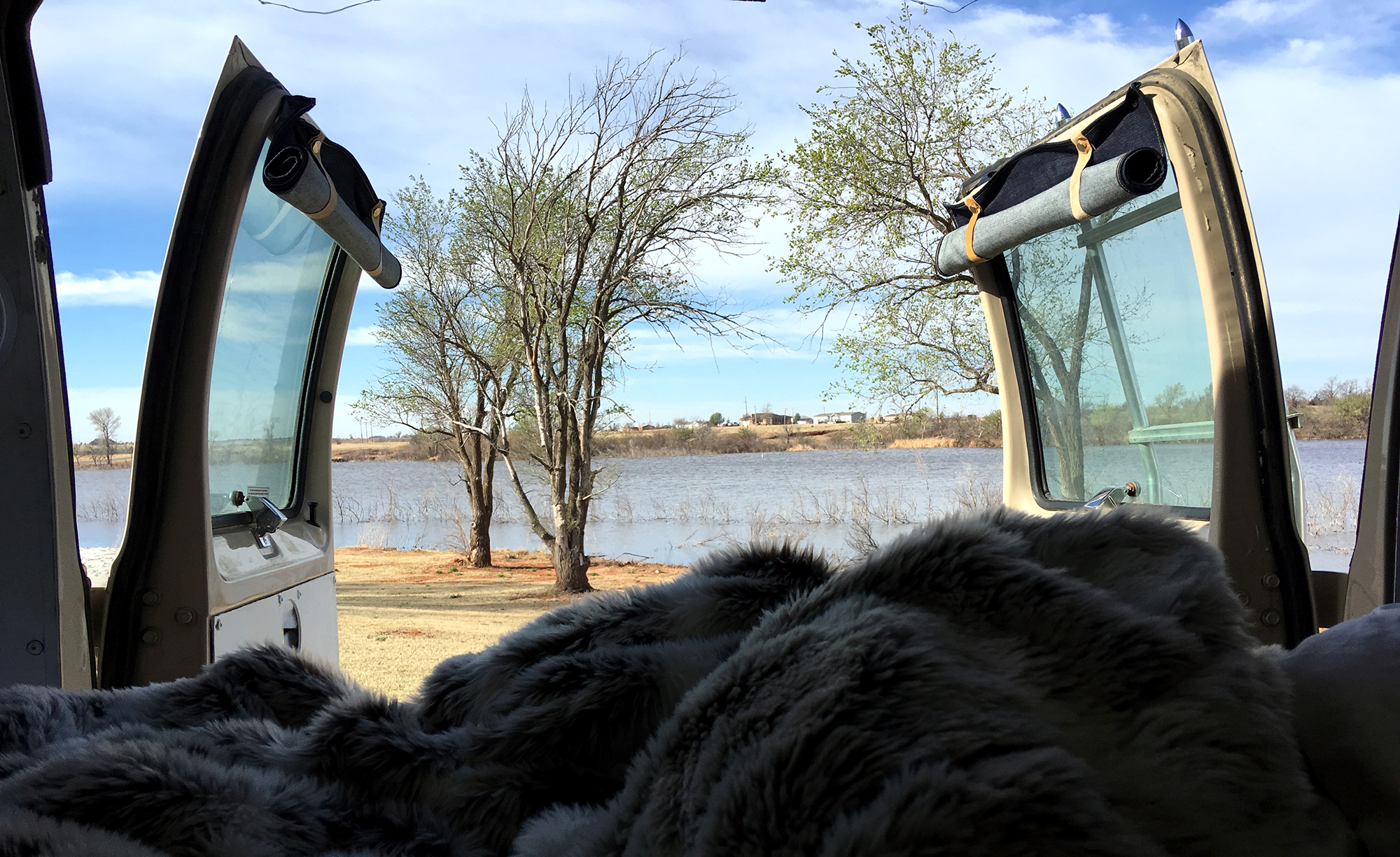 Waking up to a nice view never gets old

Following the I-40, we were back in our old friend, Texas. Being away from it for a couple months, we must have forgotten how boring it is to drive across. We love Texas, but outside of the cities, it’s farmland galore and looks strikingly like its Canadian counterpart, Saskatchewan (all Canadians immediately know what I’m talking about). Time seems to crawl when there’s not much to look at but after all, we were only on our way to Amarillo to do laundry so we definitely weren’t in any hurry. With chores done, we took a look at the engine again and tried to figure out what was going on because we were also hearing a rattling noise at high RPMs and while going uphill that we knew couldn’t be good. Once we hit New Mexico again, there’s a lot of mountain driving on that side of the country so we wanted to get this sorted. With extensive googling and reading our Haynes book as bedtime literature, I’ve come to believe that this sound is called “pinging” and can usually be taken care of by an octane booster or premium gas. The fix seemed too easy but worked nonetheless. We settled into our campsite in San Jon, a forgotten Route 66 town not far past the state line of New Mexico and got some rest before continuing the journey and the automotive saga that is owning an older vehicle. We’re not mechanics but we’re learning a ton and as they say, it’s a labour of love.