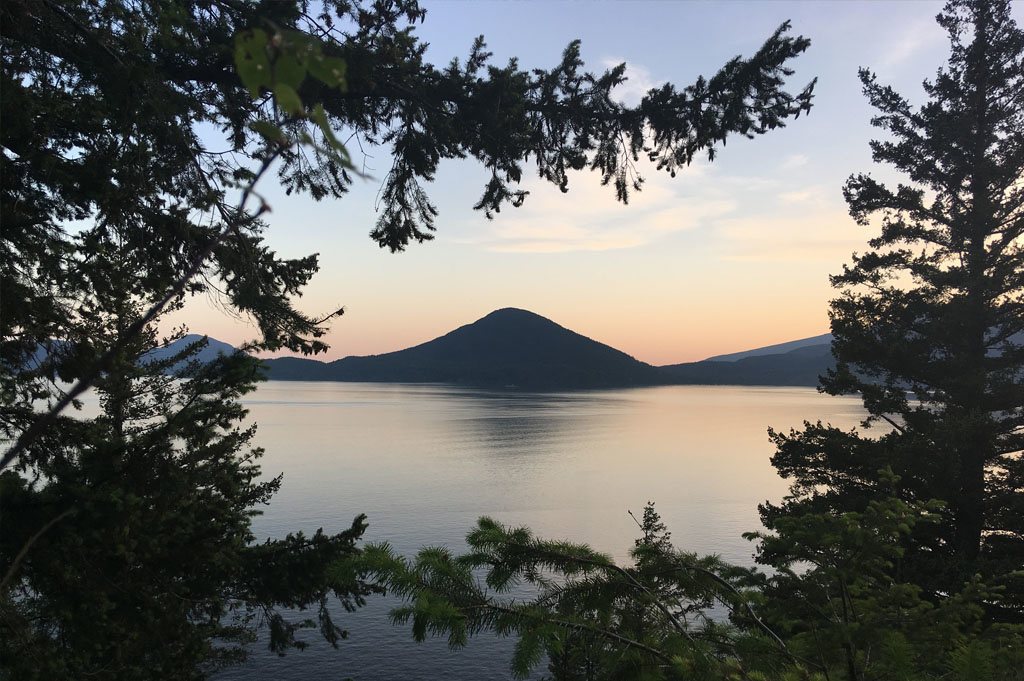 We clocked in some major city miles in Vancouver before heading away from the coast and toward Hope, British Columbia. Check out some of our stealth camping tips so you and your van can live that big city dream!

Sailing into Horseshoe Bay on a warm May evening made for a pretty spectacular welcome back onto mainland BC. All of the smaller islands surrounding Vancouver Island and the luxurious shacks that sit atop them sparkled in the setting sun as our ferry docked about 15 minutes north of West Van. We didn’t want to deal with driving through the city after a long day cruising across the island so we headed north toward Squamish to hunker down for the night. Highway 99, or the Sea-to-Sky Highway, is kind of like a continuation of America’s Pacific Coast Highway that skims the rugged coastline all the way to Squamish before surrounding you in mountains as you head into Whistler. BC is full of scenic drives but this route in particular is pretty special. 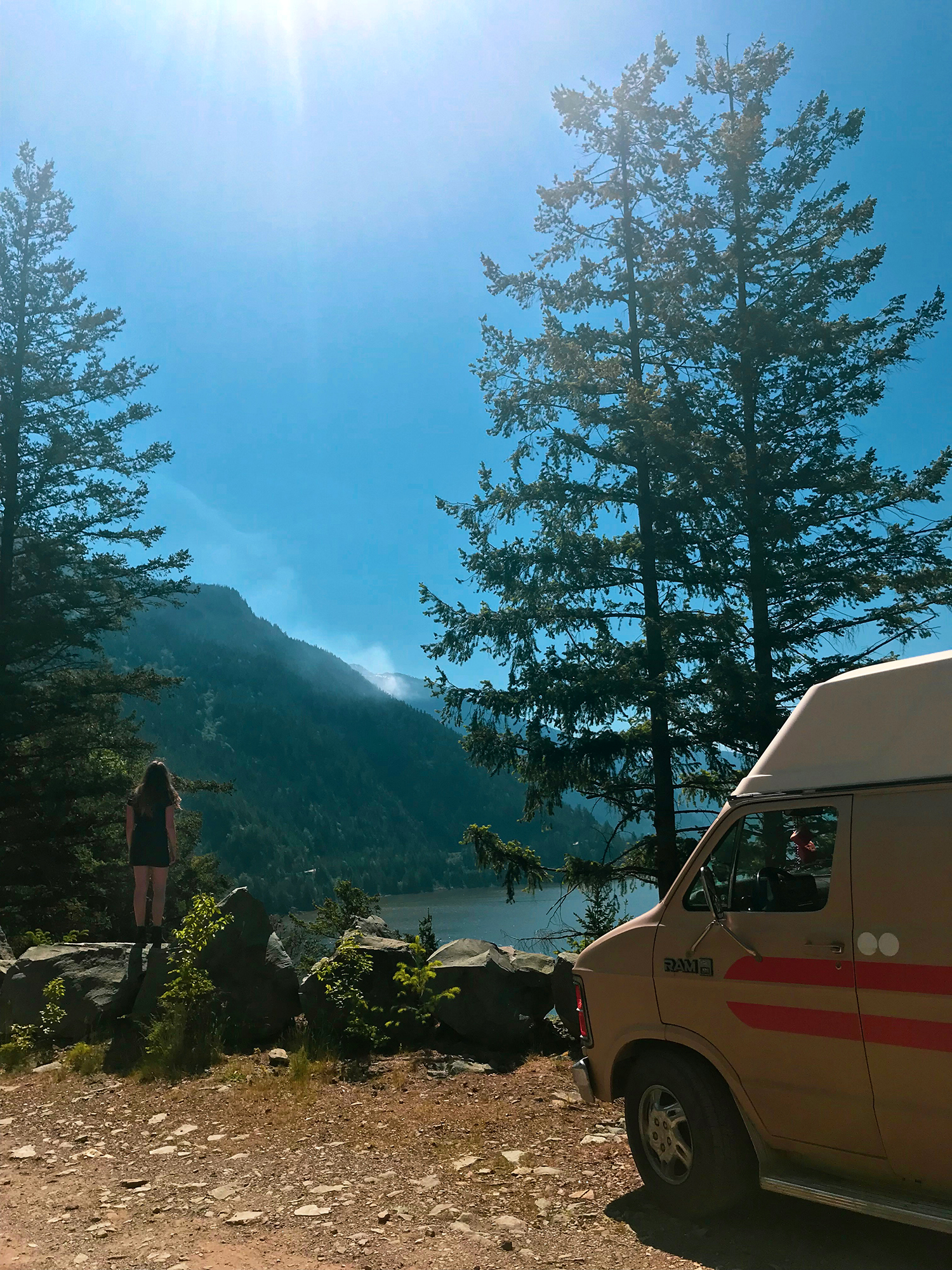 We found a spot just off the highway with a glorious view of the islands (think Canada, not Galapagos) and the seemingly calm waters that separated us. Being so close to Vancouver, this was a fairly popular spot to camp with a small “village” of vanners forming as more people set up shop for the night. We’re not big fans of waking up early so luckily most of the folks had already set out for the day by the time we rolled out of bed and we had the views all to ourselves. 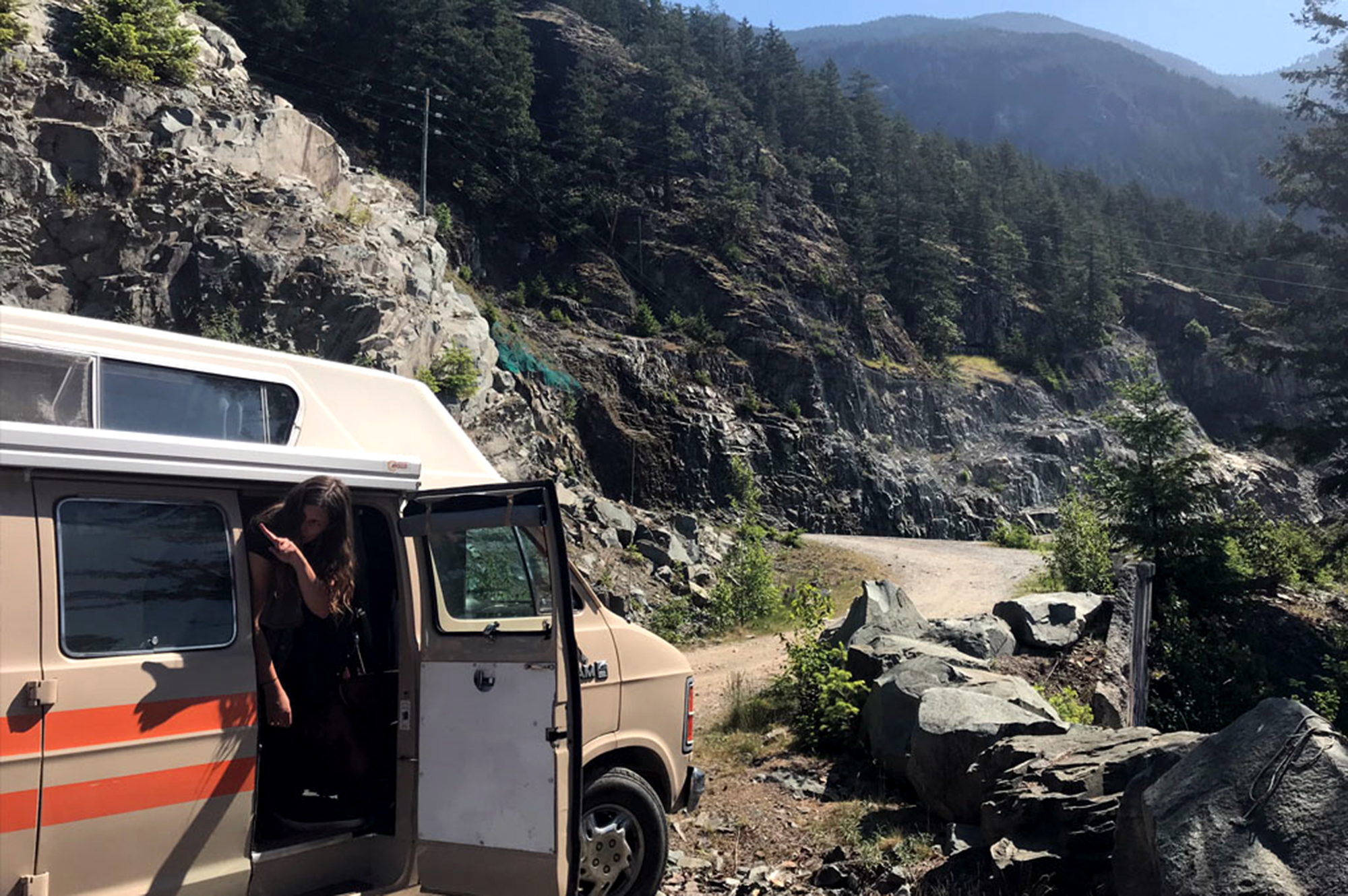 Over the next week, we got our fair dose of city life as we caught up with lots of friends and family in Vancouver. In fact, we experienced the ultimate Vancouver dream: living on a swanky street in Kitsilano lined with multi-million dollar houses while being steps from the beach and tons of bars and restaurants – oh and, for $0 in rent. City camping is not for everyone and definitely gets old pretty quick but it made for a great way to keep our expenses down while spending our days wandering around a big city. It can seem a little daunting at first to pick a spot where you’ll actually be able to sleep the night and not be woken up by relentless street noise or the fear of police knocking on your window in the middle of the night, so here are a few tips we’ve learned for successful stealth camping:

We spent the week working while eating good food, hanging out at the beach and catching up with old friends. We even dabbled in “vegan chicken wings”, AKA cauliflower wings, that were way tastier than we would have ever imagined – and that says a lot coming from two devoted carnivores. Being such an expensive city to live in, we were pretty lucky to bring our accommodations with us and have nice enough weather to walk EVERYWHERE. That is one thing that I love about cities, an hour walk to meet up with your friend turns into an adventure in itself with all the interesting things to see and colourful folks to people watch (in the least creepy way possible). Of course the main downside about being in the city is that you can’t help but spend money – how can you turn down a fresh bowl of delicious ramen when all you have in the van is Mr. Noodles?! That being said, we’ll just focus on the money we saved in accommodation and transportation and not the money we spent on food… 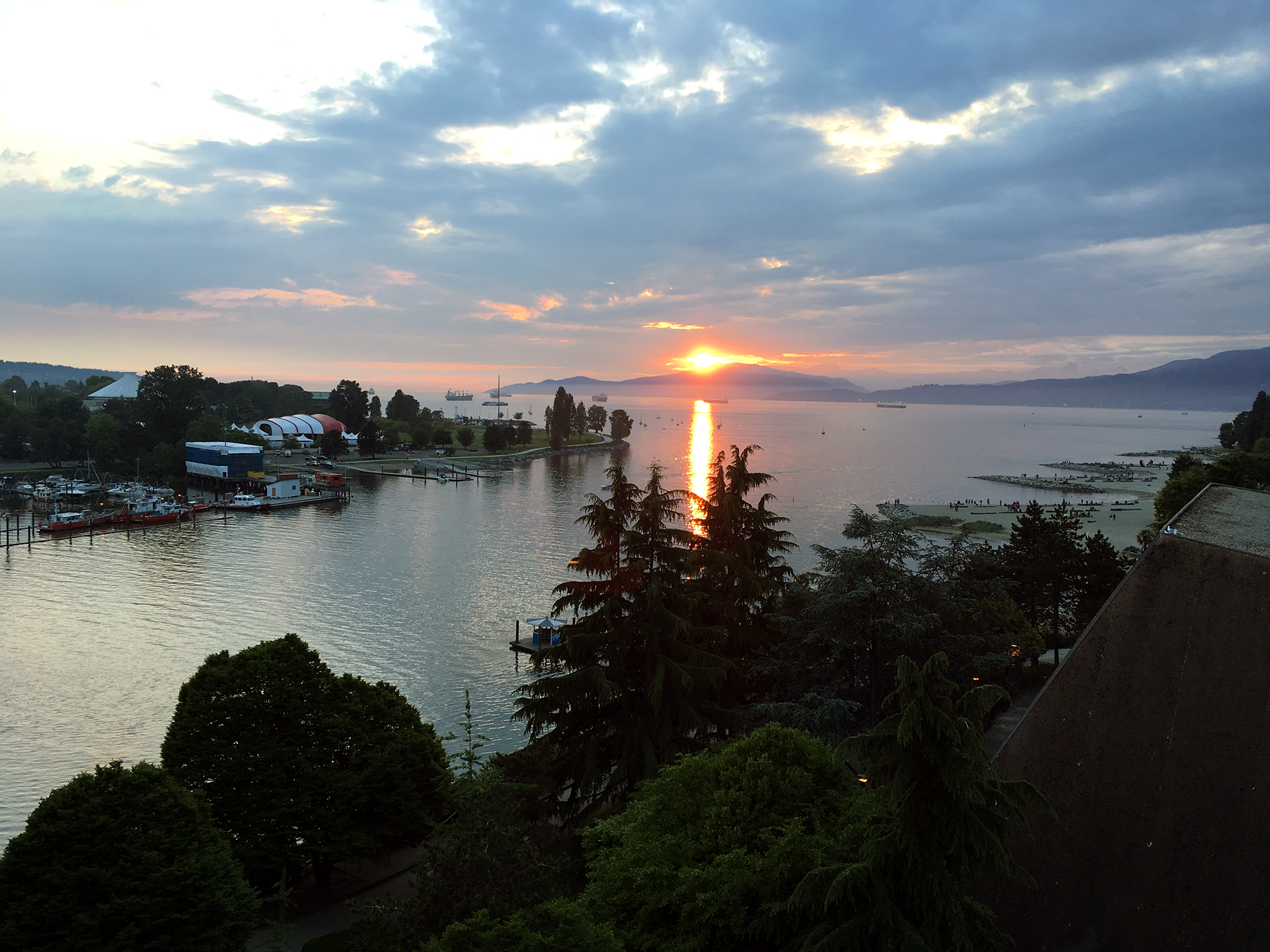 How purdy! The Vancouver sun (the actual one, not the newspaper) setting over the mountains from Burrard Bridge

The time finally came where we were sick of the city and desperately wanted to be back in the woods. We left the sky-high Vancouver gas prices behind and drove past Chilliwack to Hope, BC where we found ourselves a spot on the Skagit River. Given the season, the rivers were quite high as the snow from the mountains was in prime melting time but this had to be the fastest moving river I’ve ever seen. It looked like someone put this river on fast-forward and just left it. Anyway, it felt good to be back in nature until we took a look around the campsite and it was covered in trash. California was bad for litterbugs but this was downright disgusting – the previous campers had attempted to burn all their unneeded camping gear so the fire pit had an ashy camping chair in it while wrappers and beer boxes were scattered throughout. The kicker though, was that they left two chicken cutlets on a cooking grill on the fire pit. You don’t need to be all that “bear aware” to know that that’s not a good idea – ever. So we cleaned it all up and finished their botched burning job to leave the spot as a campsite instead of a pigsty. 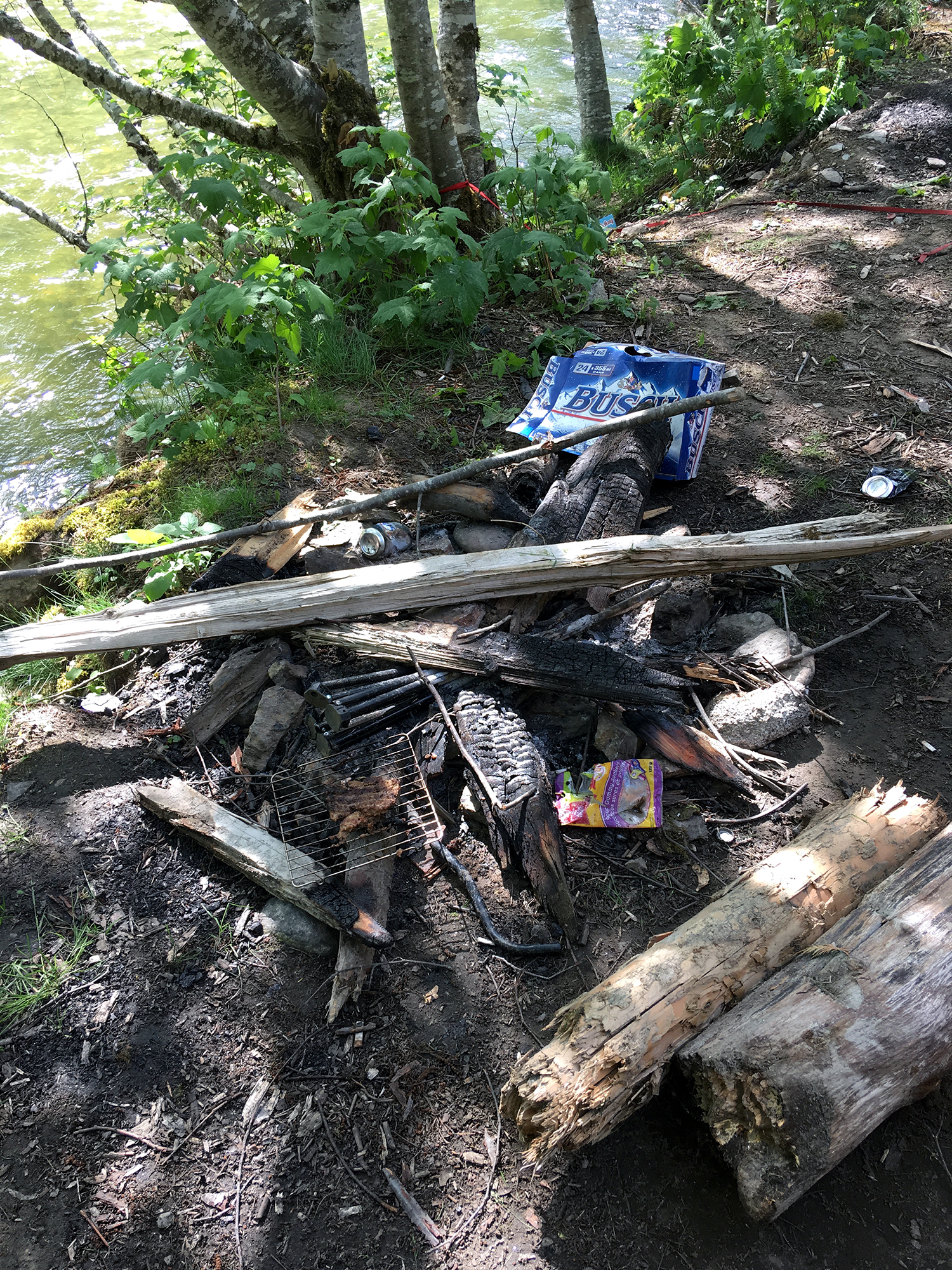 This campsite was once a gnarly site 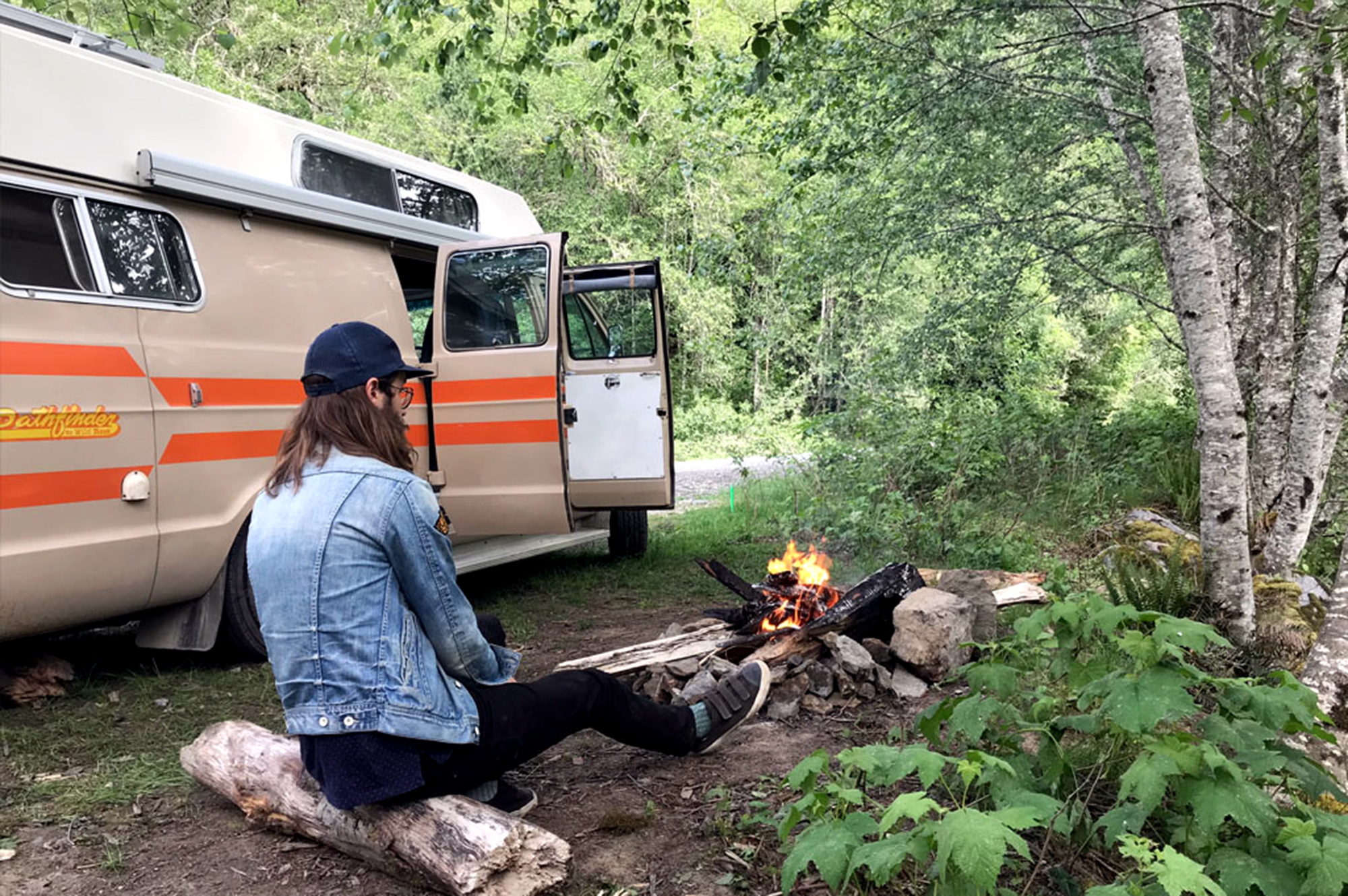 Then became a great riverside spot!

Coastal BC has been amazing so we’re stoked to head into the mountains and start exploring the interior. Summer is upon us and Canada is full of what we call Crown Land (similar to BLM lands in the States) so we’re gearing up for a few months of amazing free camping. Follow along on our new Camping Directory where we’ll continuously share all the hidden gems we uncover. Shoot us a message or leave a comment with any must-see spots anywhere from BC to Newfoundland – we’re doing it all!