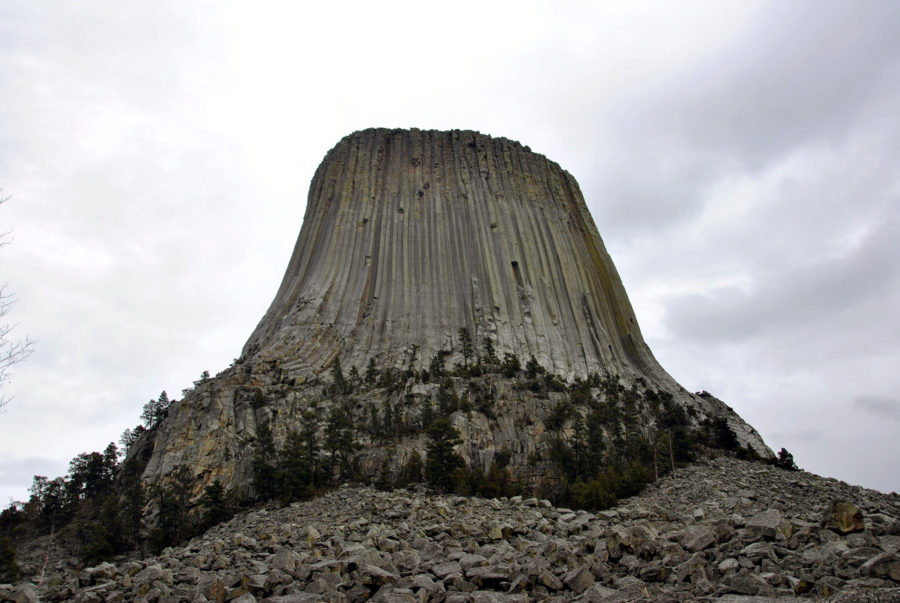 11 JunDippin’ Back Down to the USA

After a few weeks in Calgary catching up on boring adult stuff like renewing our registration and doing our taxes, we made our way back south to the ol’ US of A. Our first stops brought us through Montana to Wyoming, along with a little disappointing detour to South Dakota.

Well, it’s been a while! After a longer winter than we anticipated spent in Campbell River on Vancouver Island (because it’s so awesome), we spent a few quick days in Vancouver squeezing in hangout sessions with as many friends as we could in the shortest amount of time. We decided to take a different route back to Calgary this time and followed the Trans Canada the whole way to avoid the unpredictable weather of the Coquihalla and the endless mountain passes of the Crowsnest. If you’re looking to make this drive and want to be as easy on the gas as possible, the Fraser Canyon route is definitely a good choice with minimal hills – even though it takes about 1.5 hrs longer than the Coq. We zoomed through the desert lands of Kamloops and spent a snowy night in Revelstoke before making the relentlessly stunning drive through Glacier and Banff and shutting ‘er down in Calgary at Justin’s brother’s house. We spent a few weeks catching up on all the things we put off doing over the winter (lol) and if you’ve been following along on our Instagram, you’d know that we even got a puppy! She is the absolute best and was just as excited as we were to hit the road again and start uncovering some new ground. 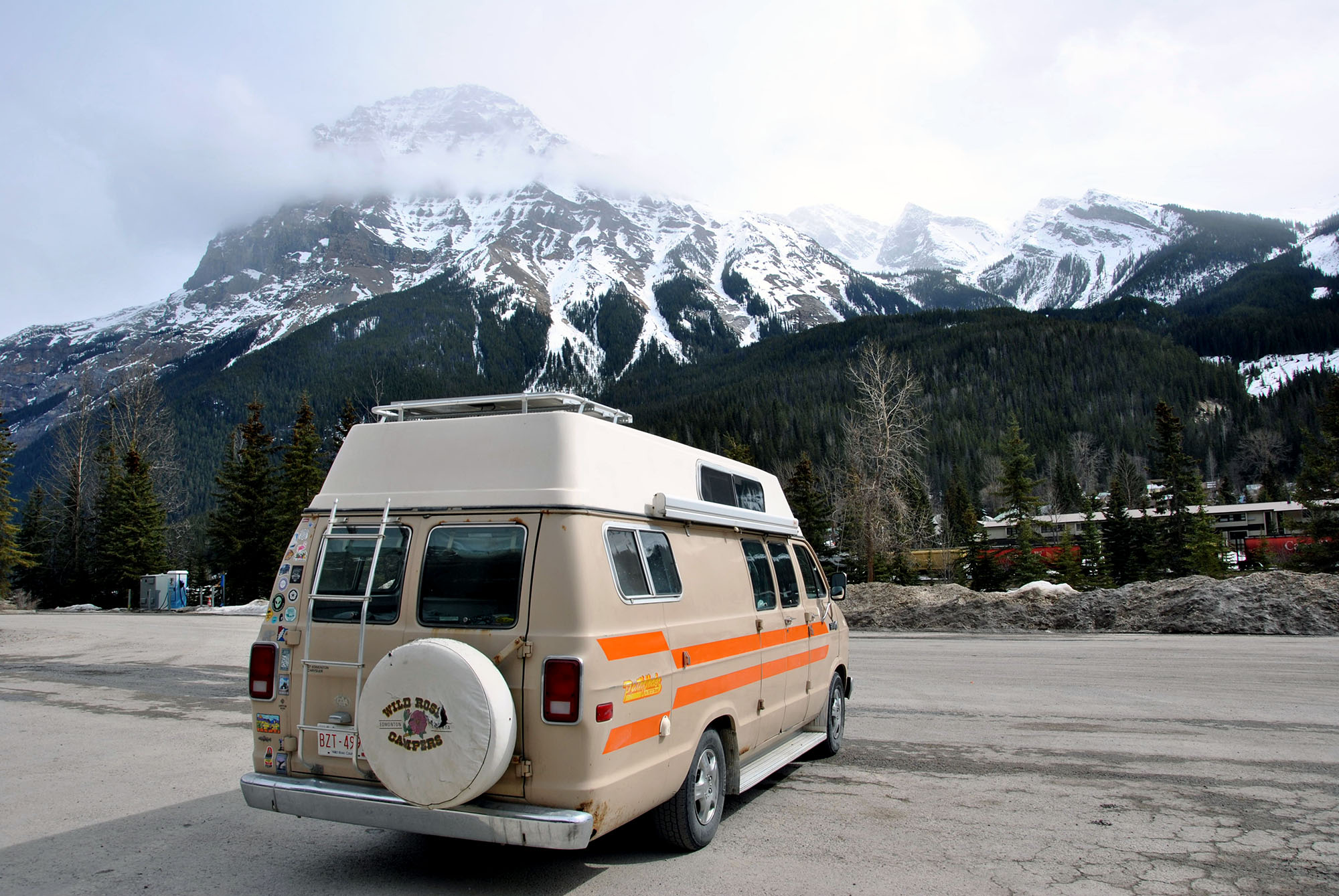 A pitstop in Field, BC is always gorgeous 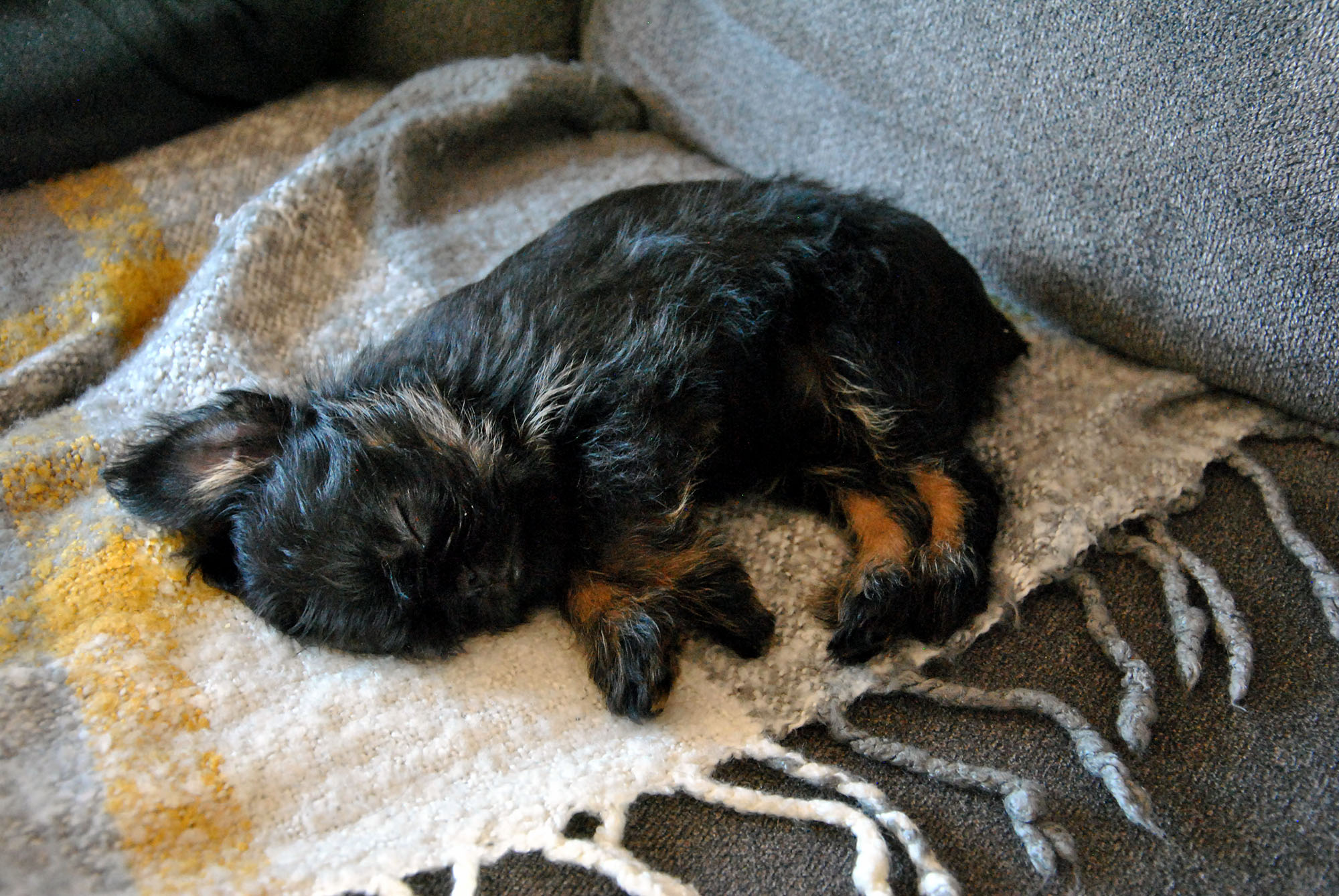 We crossed the border armed with our roster of veterinary paperwork and expected a full shakedown but cruised through without any hassle, which always makes for a good start to a trip. We drove through the border town of Shelby, MT which was a huge throwback to our first night on the road ever back in 2017. Happily opting not to stay there again, we made our way into the Lewis and Clark National Forest near Monarch where we spent the night amid the trees and stubborn springtime snow. Pierogi (our dog) had a blast sniffing around the new territory and did a pretty good job with her first long drive. We’re sure she’ll be well-adjusted in no time. 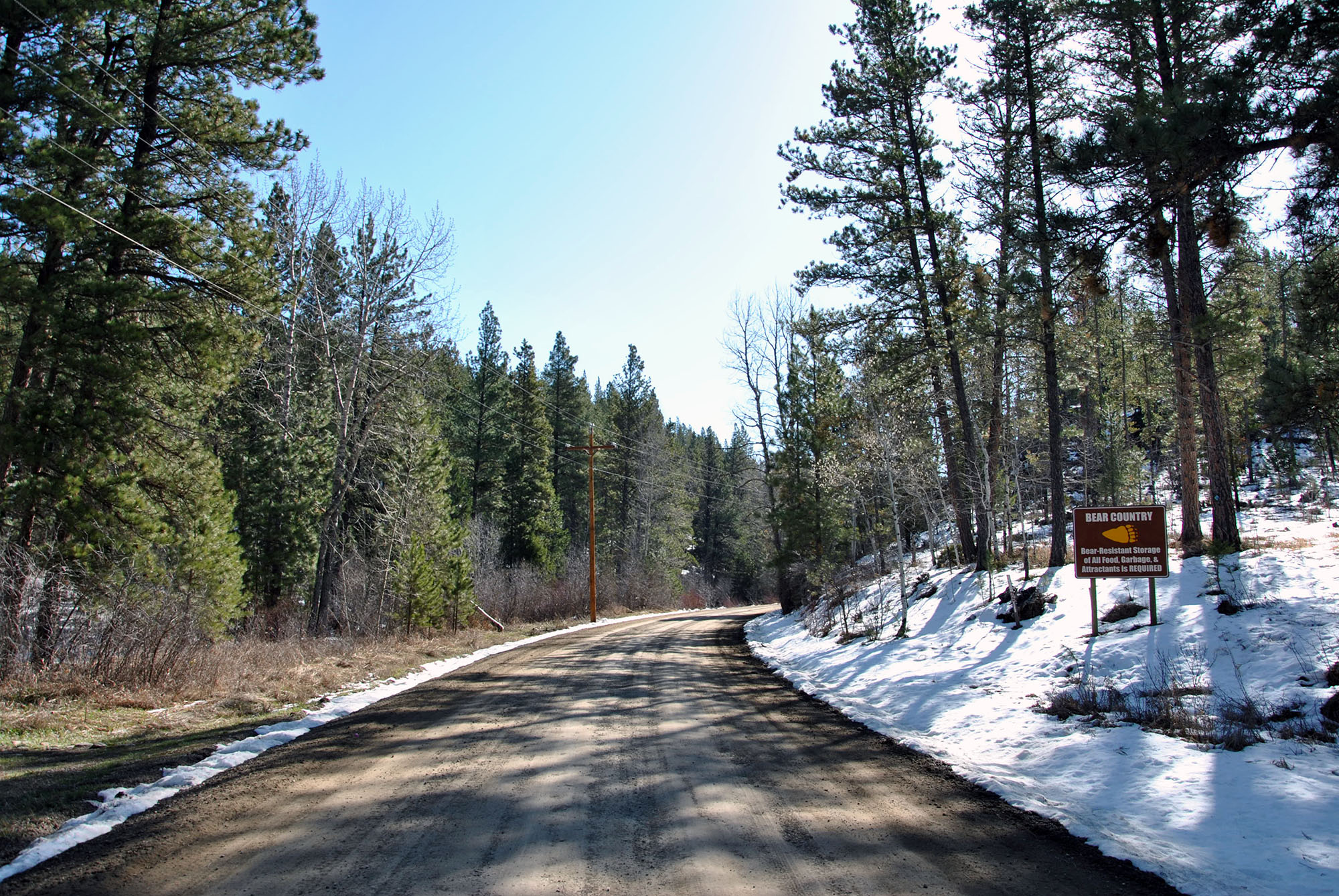 After a couple necessary cheap grocery and booze stops, we hit up our first new state in a while and started to feel truly Home on the Range in Wyoming. Wyoming is one of those places that you often forget exists until you remember that two of the country’s greatest marvels call this place home: Yellowstone National Park and the Grand Tetons. Sadly, the weather this early in May felt more like March and just wasn’t ideal for doing a bunch of mountain exploring. This is the second time we’ve missed the road openings/closures to Yellowstone by a couple of weeks so one day we’ll plan accordingly and actually get a chance to visit… 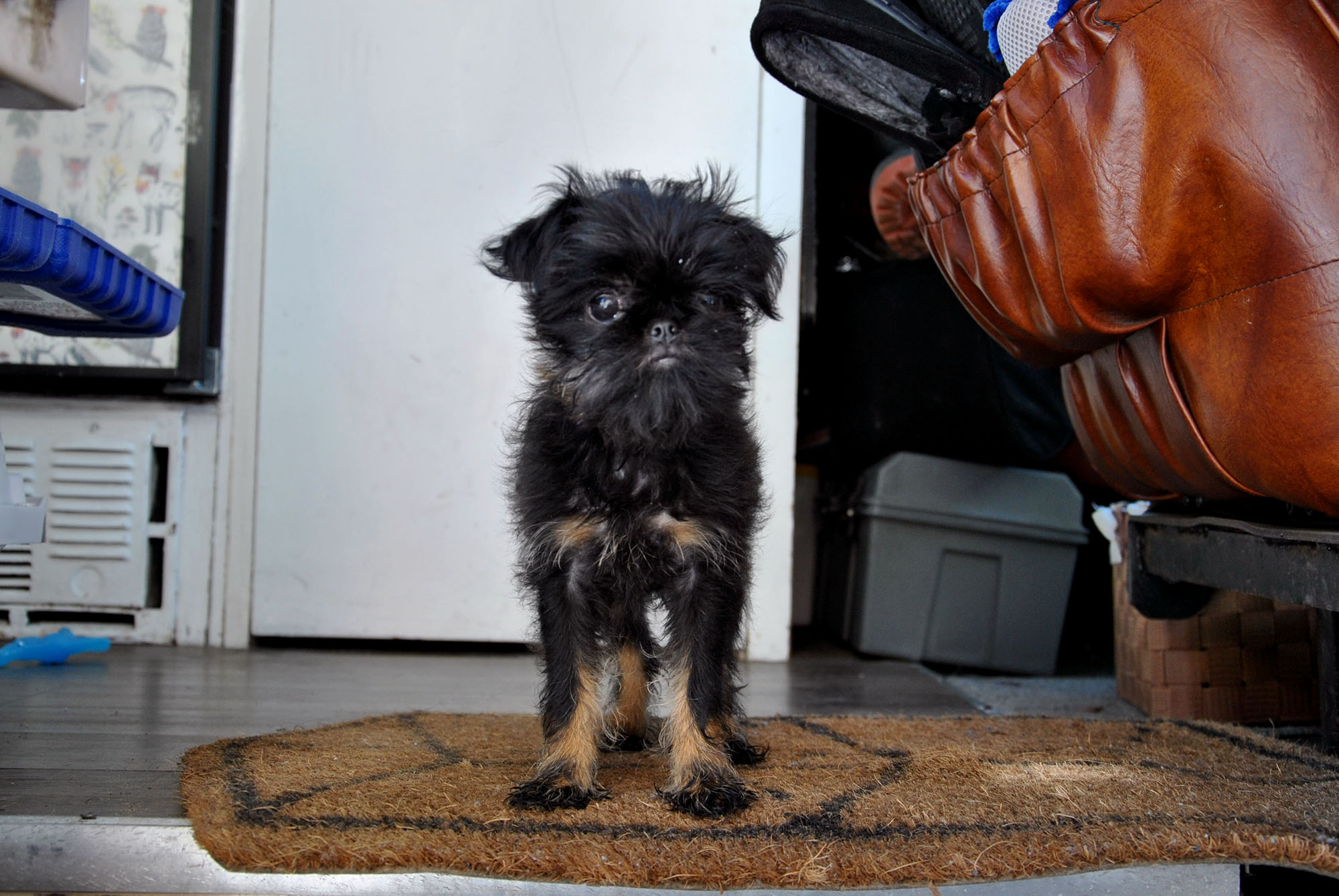 The new bouncer we hired for the van. Real tough, eh?

Anyway, this time around we stuck to the eastern side of the state which was a total hidden gem. You can tell that all the farmers and ranchers take pride in their properties because everywhere we went was beautifully and meticulously maintained. We camped a night at Tongue River Canyon, which was a super cool and unexpected backdrop to a breezy May evening. There was so much rugged red rock that seemed to come out of nowhere after miles and miles of grassy farm fields. 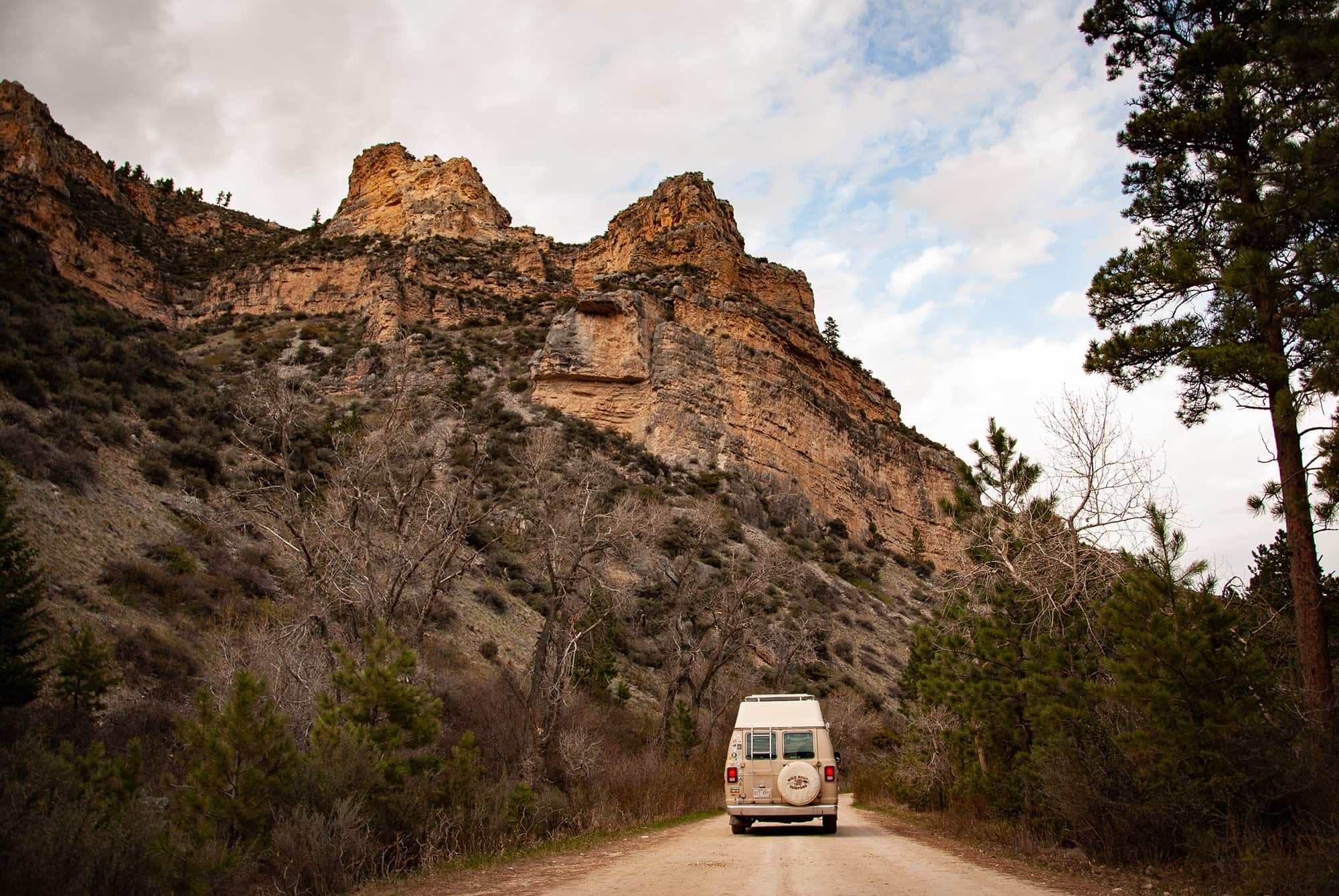 Wyoming was full of surprises. Like these rocky red cliffs.

From Tongue River we headed east to check out the crazy rock formation that is Devil’s Tower National Monument and were not disappointed. This was one of those places that we had never heard of but saw a photo of while scrolling through Reddit just a few days before and instantly said “let’s go” when we found out it was in Wyoming. How the tall rock actually came to be is still up in the air but seeing it appear out of nowhere as we drove up was conclusively super cool. It’s literally just a tall rock formation that looks like it shot straight up out of the ground while everything else in the area is mostly flat and gives no nods to its existence. It was raining when we went and the dark, ominous clouds added to the eeriness of the whole place making it feel like the rock really was a product of the Devil’s handiwork (but more realistically, volcanoes). We walked around the base of it and observed the perfectly carved out lines that give it its distinct ridges. Climbing was closed for the time being because of nesting falcons but I can only imagine how crazy that would be. 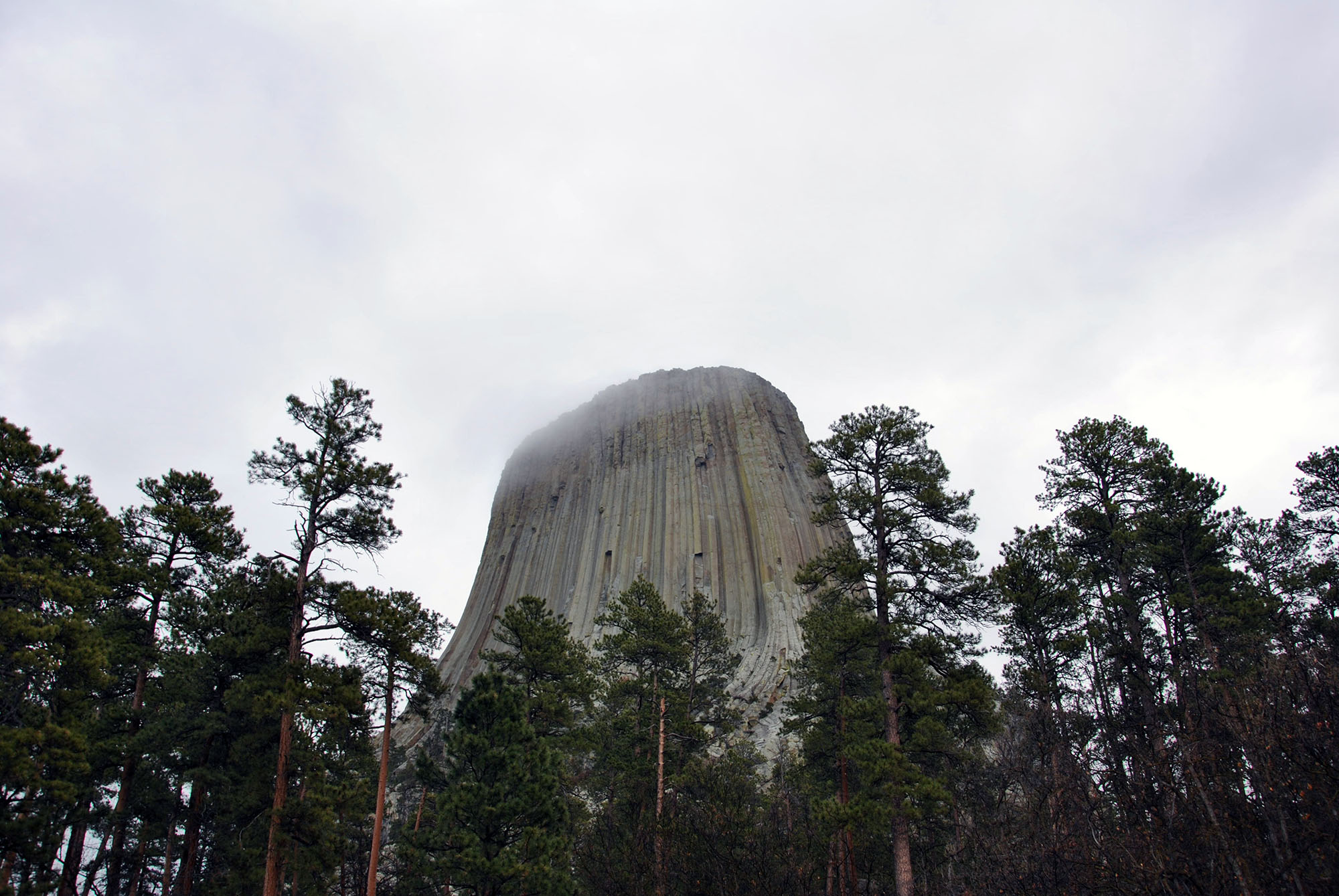 After leaving the tower and spending a night in the Black Hills National Forest, we saw a sign saying that Mount Rushmore was only an hour and a half away. Now, Mount Rushmore is definitely not the usual type of landmark that we get excited by but for its shear ridiculousness and hilarity, we knew we had to go. We woke up the next day and rolled into South Dakota while a thick fog filled the sky. We shrugged it off and figured it would burn off by the afternoon and kept on truckin’. As luck would have it, we got there and couldn’t see a damn thing. At the ticket booth, we asked if anything was visible and the guy chuckled while pointing behind him and saying, “well, it’s right there so you tell me.” So it was a bit of a fail but made for a pretty hilariously disappointing story. Before you ask – yes, Crazy Horse was equally invisible. 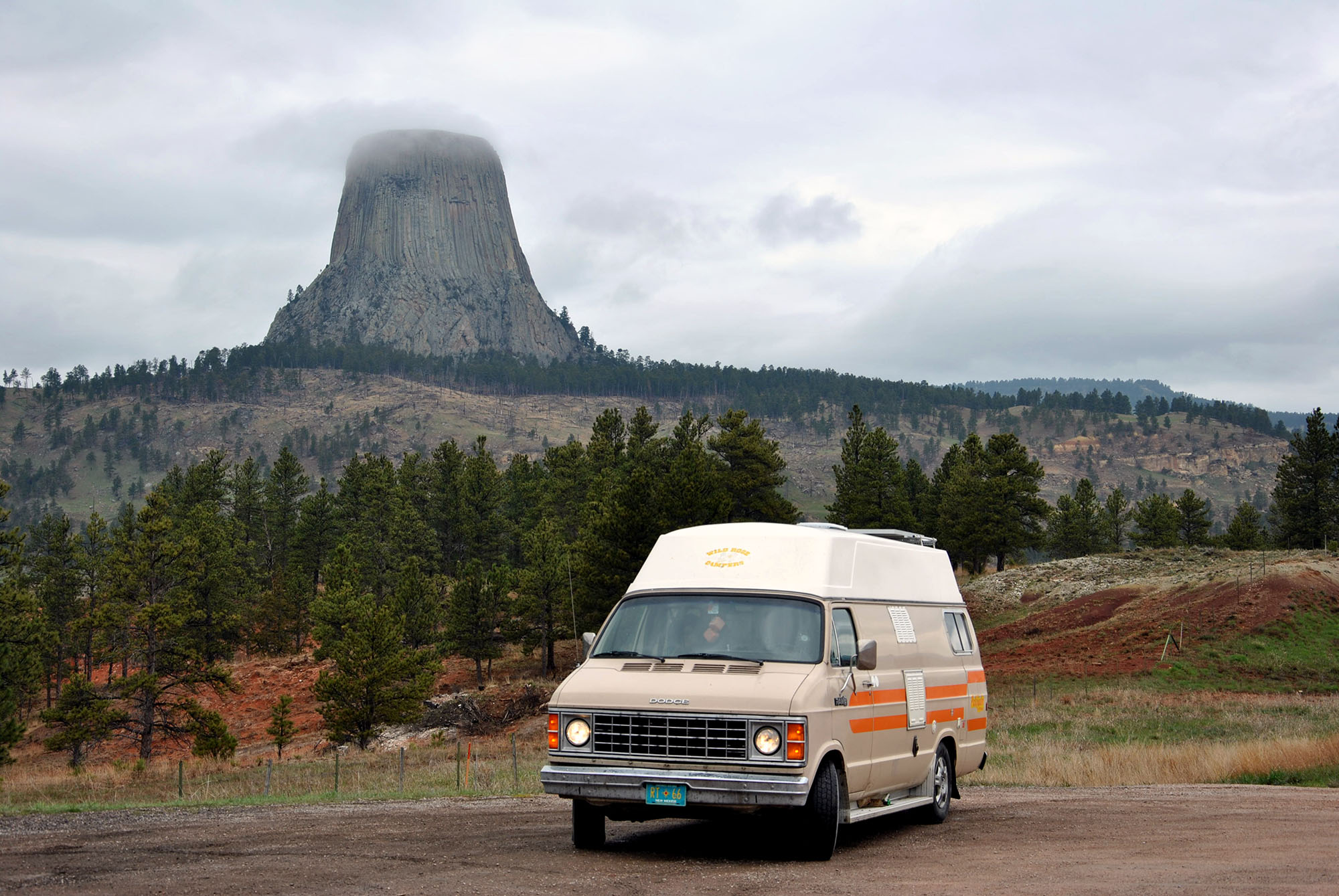 Another view of Devil’s Tower. Note the fog building.

Rain seemed to follow us for the rest of the week as we crossed back into Wyoming for cheaper and less confusing gas. Gas? Confusing? In South Dakota, yes. Plus gas is cheaper than regular! It seems that “plus” isn’t truly the middle tier gas here; from what I gather, the government subsidizes ethanol production (from corn) in these “corn belt” states so while the regular gas has a higher octane, it has a lower ethanol content and the plus gas has a higher ethanol content and a lower octane. Needless to say, this made our trip to the pump oddly confusing and resulted in a lot of baffled googling. Anyway, we spent another gloomy night at Grayrocks Reservoir near Wheatland and tried to enjoy the views of the water while the sky dumped down on us with buckets of cold rain and aggressive wind. 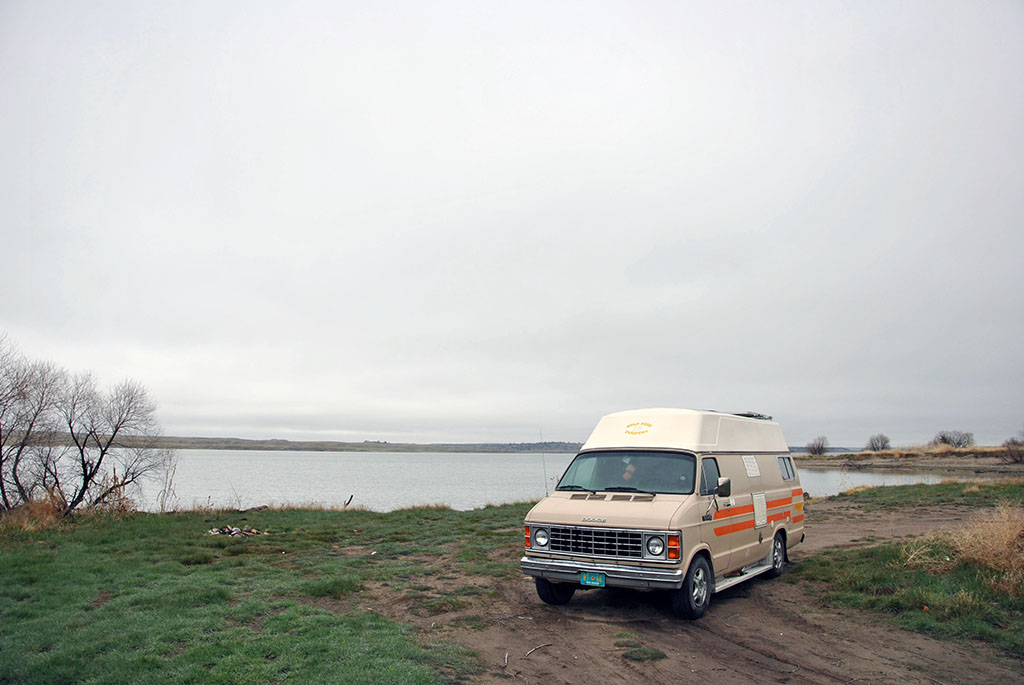 If the sun was out and the sky was blue, I’m sure this would look a little less forlorn

The next day meant we had another new state on the agenda and were only a day away from picking up our friends from the airport in Denver for a week-long adventure. We boogied through Cheyenne and crossed the state line into Colorado while questioning if the American Rocky Mountains even exist because it was so foggy (not trying to start a conspiracy theory here). We were super stoked to check out a state we’ve been wanting to visit for a while and couldn’t wait to share it with our new little adventure bud too.